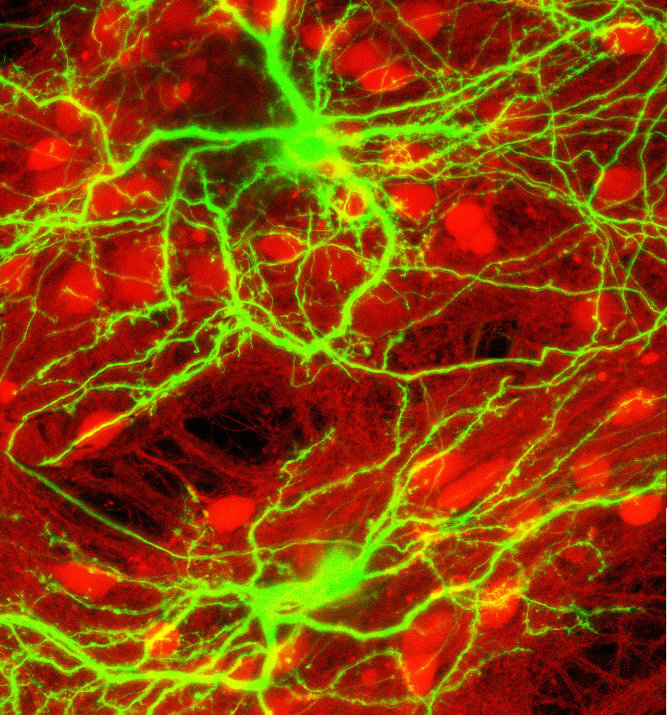 Uncovering how neural circuits achieve a balance between excitation and inhibition

A team of researchers from Tübingen and Israel uncovers how brain structures can maintain function and stable dynamics even in unusual conditions. Their results might lay the foundations for better understanding and treating conditions like epilepsy and autism.

The neurons in our brains are connected with each other, forming small functional units called neural circuits. A neuron that is connected to another one via a synapsis can transmit information to the second neuron by sending a signal. This, in turn, might prompt the second neuron to transmit a signal to other neurons in the neural circuit. If that happens, the first neuron is likely an excitatory neuron: one that prompts other neurons to fire. But neurons with the exact opposite task are equally important to the functionality of our brain: inhibitory neurons, which make it less likely that the neurons they are connected to send a signal to others.

The interplay of excitation and inhibition is crucial for normal functionality of neural networks. Its dysregulation has been linked to many neurological and psychiatric disorders, including epilepsy, Alzheimer’s disease, and autism spectrum disorders.

From cell cultures in the lab…

Interestingly, the share of inhibitory neurons among all neurons in various brain structures (like the neocortex or the hippocampus) remains fixed throughout the lifetime of an individual at 15-30%. “This prompted our curiosity: how important is this particular proportion?”, recalls Anna Levina, a researcher at Tübingen University and the Max Planck Institute for Biological Cybernetics. “Can neural circuits with a different proportion of excitatory and inhibitory neurons still function normally?” Her collaborators from the Weizmann Institute of Science in Rehovot (Israel) designed a novel experiment that would allow to answer these questions. They grew cultures that contained different, even extreme ratios of excitatory and inhibitory neurons.

The scientists then measured the activity of these artificially designed brain tissues. “We were surprised that networks with various ratios of excitatory and inhibitory neurons remained active, even when these ratios were very far from natural conditions”, explains Levina’s PhD student Oleg Vinogradov. “Their activity does not change dramatically, as long as the share of inhibitory neurons stays somewhere in the range of 10% to 90%.” It seems that the neural structures have a way of compensating for their unusual composition to remain stable and functional.

…to a theoretical understanding

So naturally the researchers asked next: what mechanism allow the brain tissue to adjust to these different conditions? The researchers theorized that the networks adapt by adjusting the number of connections: If there few inhibitory neurons, they have to take on a bigger role by building more synapses with the other neurons. Conversely, if the share of inhibitory neurons is large, the excitatory neurons have to make up for this by establishing more connections.

The theoretical model of the Tübingen scientists can explain the experimental findings of their colleagues in Rehovot and uncover the mechanisms helping to maintain stable dynamics in the brain. The results provide a clearer picture of how excitation/inhibition balance is preserved and where it fails in living neural networks. In the longer term, they might be useful for the emergent field of precision medicine: induced pluripotent stem cell derived neural cultures could be used to find mechanisms of neuropsychiatric disorders and novel medications.