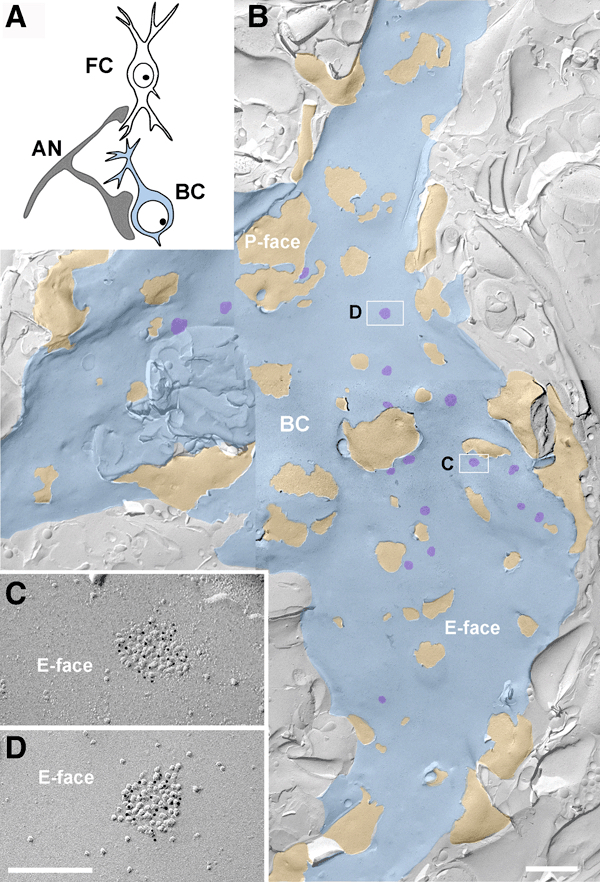 Auditory nerve synapses on bushy cells in the FRIL replica. (a) Schematic of the auditory nerve synapses analyzed with FRIL. AN auditory nerve, BC bushy cells (blue color); FC fusiform cells. FRIL electron micrographs at low magnification showing the IMP-cluster distribution of auditory nerve synapses (AN) on bushy cell (BC) soma (b). E-face of the BC membrane is pseudocolored in blue to aid visualization; P-face of the AN membrane is pseudocolored in light orange to aid visualization; IMP-clusters, structural landmark of postsynaptic membrane specialization in replica images, are false colored in purple to aid visualization. Scale bar 1 μm. c, d Images of IMP-clusters (ie; PSDs) of AN synapses on the cell body of a BC immunolabeled with the pan-AMPAR antibody, which reacts with conserved extracellular regions of GluA1–4 (5 nm gold), indicating concentration of immunogold particles in IMP-clusters on the E-face. Scale bar 200 nm

The neurotransmitter receptor subtype, number, density, and distribution relative to the location of transmitter release sites are key determinants of signal transmission. AMPA-type ionotropic glutamate receptors (AMPARs) containing GluA3 and GluA4 subunits are prominently expressed in subsets of neurons capable of firing action potentials at high frequencies, such as auditory relay neurons. The auditory nerve (AN) forms glutamatergic synapses on two types of relay neurons, bushy cells (BCs) and fusiform cells (FCs) of the cochlear nucleus. AN-BC and AN-FC synapses have distinct kinetics; thus, we investigated whether the number, density, and localization of GluA3 and GluA4 subunits in these synapses are differentially organized using quantitative freeze-fracture replica immunogold labeling. We identify a positive correlation between the number of AMPARs and the size of AN-BC and AN-FC synapses. Both types of AN synapses have similar numbers of AMPARs; however, the AN-BC have a higher density of AMPARs than AN-FC synapses, because the AN-BC synapses are smaller. A higher number and density of GluA3 subunits are observed at AN-BC synapses, whereas a higher number and density of GluA4 subunits are observed at AN-FC synapses. The intrasynaptic distribution of immunogold labeling revealed that AMPAR subunits, particularly GluA3, are concentrated at the center of the AN-BC synapses. The central distribution of AMPARs is absent in GluA3-knockout mice, and gold particles are evenly distributed along the postsynaptic density. GluA4 gold labeling was homogenously distributed along both synapse types. Thus, GluA3 and GluA4 subunits are distributed at AN synapses in a target-cell-dependent manner.