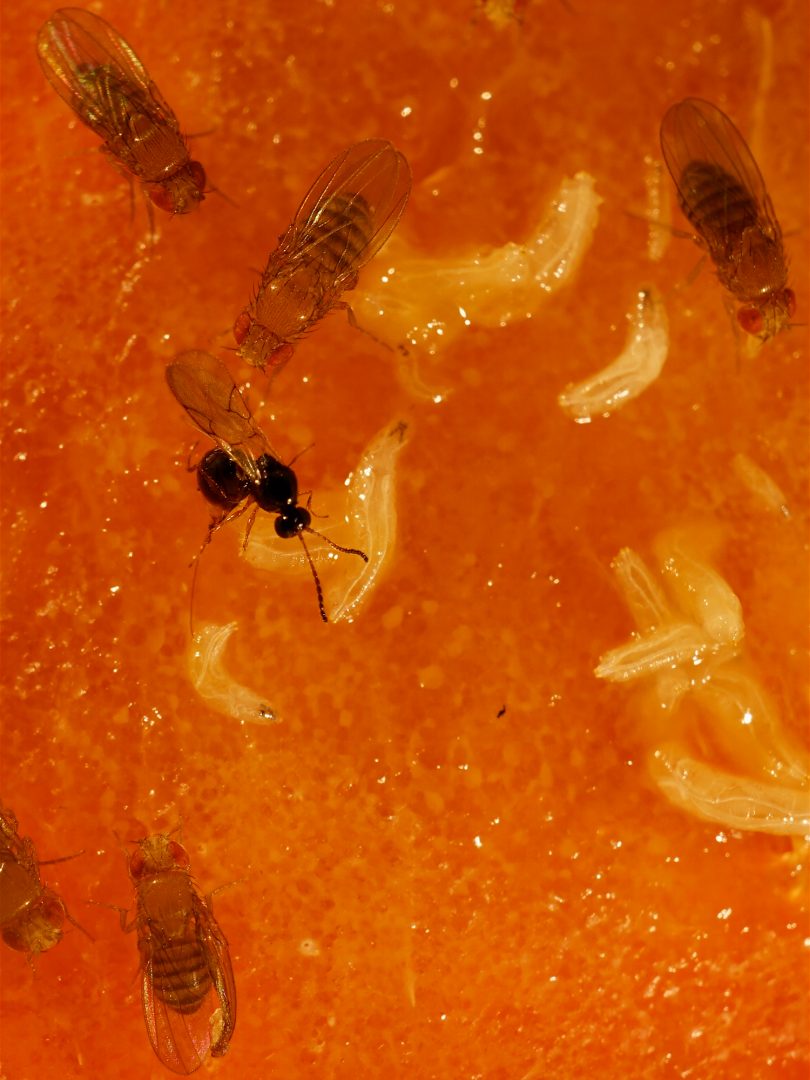 A parasitic wasp (Leptopilina boulardi) lays its eggs into larvae of the vinegar fly Drosophila melanogaster. In nature, many Drosophila larvae are killed this way. However, both larvae and adult flies are able to sense and actively avoid the wasps’ odor.

Female Drosophila flies avoid oviposition sites that smell of parasitic wasps. This increases the survival rate of their larvae.

Females of the vinegar fly Drosophila melanogaster show an especially strong response to the odour of their most dangerous enemies, parasitic wasps of the genus Leptopilina. In nature, up to 80 percent of Drosophila larvae are parasitized by these wasps, which lay their eggs into the larvae. The wasps’ larvae grow and consume the Drosophila larvae from within. However, an innate early warning system alerts female flies when wasps are near and thus increases the chance the flies’ offspring will survive. Researchers at the Max Planck Institute for Chemical Ecology identified the olfactory neuron in Drosophila which senses if enemies are nearby by recognizing their odours. The chemical compounds in the wasps trigger avoidance behaviour in the flies. One of the compounds is the wasps’ sex pheromone. For the first time scientists have described an olfactory circuit entirely dedicated to the detection of a fatal enemy.

When different organisms share the same habitat in nature, their interactions are often reduced to either eating or being eaten. In the course of evolution, organisms have evolved different adaptations in order to ensure their survival or to increase the survival rate of their offspring. Insects’ highly sensitive and highly specialized sense of smell plays a crucial role in many of their complex survival strategies.

Together with international partners, scientists from the Department of Evolutionary Neuroethology led by Bill Hansson and Markus Knaden found that the vinegar fly Drosophila melanogaster houses an olfactory neuron which is entirely dedicated to detecting the sex pheromone of parasitic wasps. A combination of gas-chromatographic and electrophysiological analyses as well as behavioural assays with flies and larvae led to the results. By applying these methods, the scientists could identify both the wasp odours and the olfactory receptors in Drosophila which detected them. Last but not least, they were able to demonstrate that the perception of these odours influenced the flies’ behaviour: Adult flies as well as their larvae actively avoided the smell of parasitic wasps.

Three components of the wasps’ odour activate a single olfactory neuron on the antennae of adult Drosophila flies. Chemical analysis revealed that these three substances are actinidine, nepatalctol, and iridomyrmecin. Interestingly, iridomyrmecin is the sex pheromone of the female Leptopilina wasp. Although adult flies have two olfactory receptors and smell all three substances in the wasps’ odour, Drosophila larvae lack one of the two receptors; they smell only the sex pheromone iridomyrmecin.

The results show again how highly specific individual olfactory receptors in Drosophila can be. In previous experiments, the researchers tested all receptors by stimulating them with different scents. However, there were a few receptors that could not be activated. Assuming that these receptors were highly specific and associated with odours that are important for the flies’ survival in nature, the scientists performed behavioural assays and tested the odour of parasitic wasps.

“Until recently, scientists thought that most odours were detected by several receptors and that each receptor was stimulated by numerous different smells. The activation patterns of the different receptors would tell the fly which environmental odours were present. However, the results from our lab tell a completely different story: At least parts of the olfactory system are highly specific. Odours that are of particular importance for the fly are not detected and processed by the general system; each of these odours has its own channel. Seemingly, this has the effect that the detection of dangerous bacteria (geosmin) or the best oviposition sites (limonene) cannot be interfered with by other environmental odours,” says Markus Knaden, who led the study together with Bill Hansson.

The strength of this study is that it combines several lines of evidence − chemical and physiological analyses, and behavioural experiments with flies and larvae. The researchers suggest that vinegar flies learned to use the odour of the parasites for their own advantage in the course of evolution. This strategy, which has evolved as a means of self-protection, is astonishing, especially since avoidance of the wasp odour is innate, as experiments using flies that had never been close to parasitic wasps and did not know the scent of Leptopilina showed. Furthermore, four Drosophila species demonstrated the same avoidance behaviour when they encountered the scent of Leptopilina wasps. That vinegar flies avoid their enemies by using their sex pheromone as an olfactory cue is a very clever move in a game called co-evolution. A counter-adaptation by the wasps is difficult, because the release of this pheromone is indispensable for reproduction.