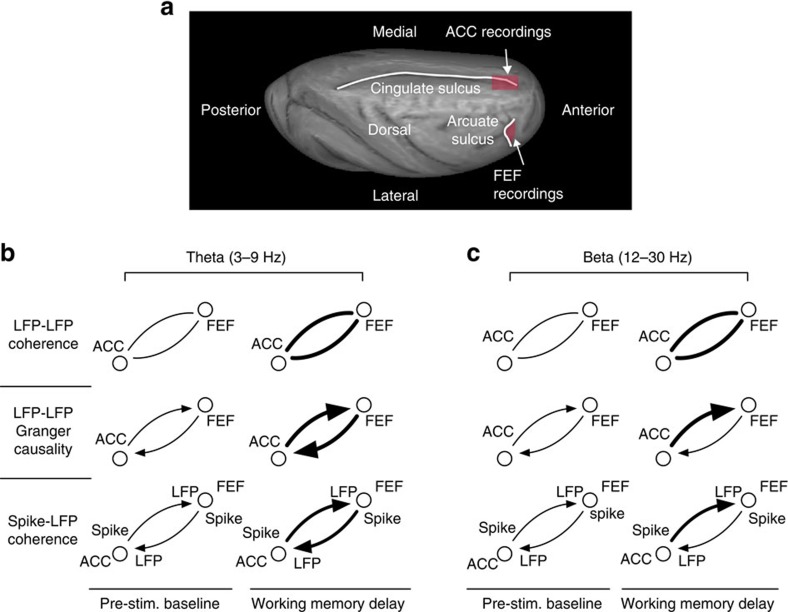 Illustration of recorded brain area locations and summary of main interareal ACC-FEF modulations observed in this study. (a) ACC and FEF recording locations (in red shading) shown on a rendering of a semi-inflated macaque brain. (b,c) Illustration of main interareal effects in the theta (b) and beta (c) band with the thickness of connections indicating the strength or prevalence of the effects. LFP-LFP coherence (top row) was modulated during the delay in >75% of LFP-LFP pairs in both frequencies (with increased coherence in the largest majority). Granger causality (middle row) increased during the delay for both ACC to FEF, and FEF to ACC directions (more pronounced in theta band), but the ACC to FEF Granger-causal flow was stronger than FEF to ACC Granger-causal flow at both theta and beta frequencies. Spike-LFP coherence (bottom row) increased for both directions during the delay in the theta band, but was different between delay and baseline merely in one beta frequency bin (at 22 Hz) for ACC spike to FEF LFP sites for contraversive saccades. Reduced interareal modulation prior to error commission was evident in both frequencies across different measures and is described in the text.

The frontal eye fields (FEFs) and the anterior cingulate cortex (ACC) are commonly coactivated for cognitive saccade tasks, but whether this joined activation indexes coordinated activity underlying successful guidance of sensorimotor mapping is unknown. Here we test whether ACC and FEF circuits coordinate through phase synchronization of local field potential and neural spiking activity in macaque monkeys performing memory-guided and pro- and anti-saccades. We find that FEF and ACC showed prominent synchronization at a 3–9 Hz theta and a 12–30 Hz beta frequency band during the delay and preparation periods with a strong Granger-causal influence from ACC to FEF. The strength of theta- and beta-band coherence between ACC and FEF but not variations in power predict correct task performance. Taken together, the results support a role of ACC in cognitive control of frontoparietal networks and suggest that narrow-band theta and to some extent beta rhythmic activity indexes the coordination of relevant information during periods of enhanced control demands.