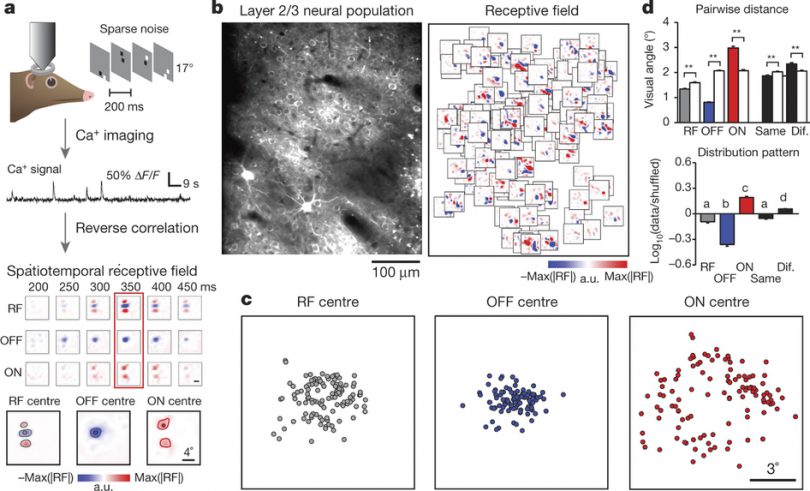 a, Spatiotemporal receptive fields and ON or OFF subfields of cortical neurons were independently obtained using calcium imaging combined with reverse correlation of responses to a sparse noise stimulus. The receptive field and ON or OFF subfields were defined at the peak signal-to-noise ratio (SNR) time window. Small circles indicate the centres of mass of the whole receptive field and the ON and OFF subfields (see Methods). b, An example of a two-photon field of view (left) and all the significant receptive fields (same scale as receptive fields in a) from individual cells overlaid on their soma locations (right). c, An example of the distribution of receptive fields and OFF and ON subfield centres in visual space. d, The pairwise distance between the centres of mass for all categories and for shuffled data (white bars) from the example in c. Receptive fields, OFF subfields, and subfields sharing the same signs are more clustered, and ON subfields and subfields with different signs are more scattered, than by chance (rank-sum test for each group, **P < 0.0001). The bottom plot summarizes the comparison of real and shuffled data; positive values indicate a scattered distribution pattern and negative values indicate a clustered distribution pattern relative to random shuffles (n = 8 fields of view from 7 animals; P = 6.1 × 10−21, Kruskal–Wallis test with post-hoc testing using Dunn’s method; letters indicate groups with statistically significant difference of P < 0.01; see Methods). Error bars indicate s.e.m.

Circuits in the visual cortex integrate the information derived from separate ON (light-responsive) and OFF (dark-responsive) pathways to construct orderly columnar representations of stimulus orientation and visual space. How this transformation is achieved to meet the specific topographic constraints of each representation remains unclear. Here we report several novel features of ON-OFF convergence visualized by mapping the receptive fields of layer 2/3 neurons in the tree shrew (Tupaia belangeri) visual cortex using two-photon imaging of GCaMP6 calcium signals. We show that the spatially separate ON and OFF subfields of simple cells in layer 2/3 exhibit topologically distinct relationships with the maps of visual space and orientation preference. The centres of OFF subfields for neurons in a given region of cortex are confined to a compact region of visual space and display a smooth visuotopic progression. By contrast, the centres of the ON subfields are distributed over a wider region of visual space, display substantial visuotopic scatter, and have an orientation-specific displacement consistent with orientation preference map structure. As a result, cortical columns exhibit an invariant aggregate receptive field structure: an OFF-dominated central region flanked by ON-dominated subfields. This distinct arrangement of ON and OFF inputs enables continuity in the mapping of both orientation and visual space and the generation of a columnar map of absolute spatial phase.