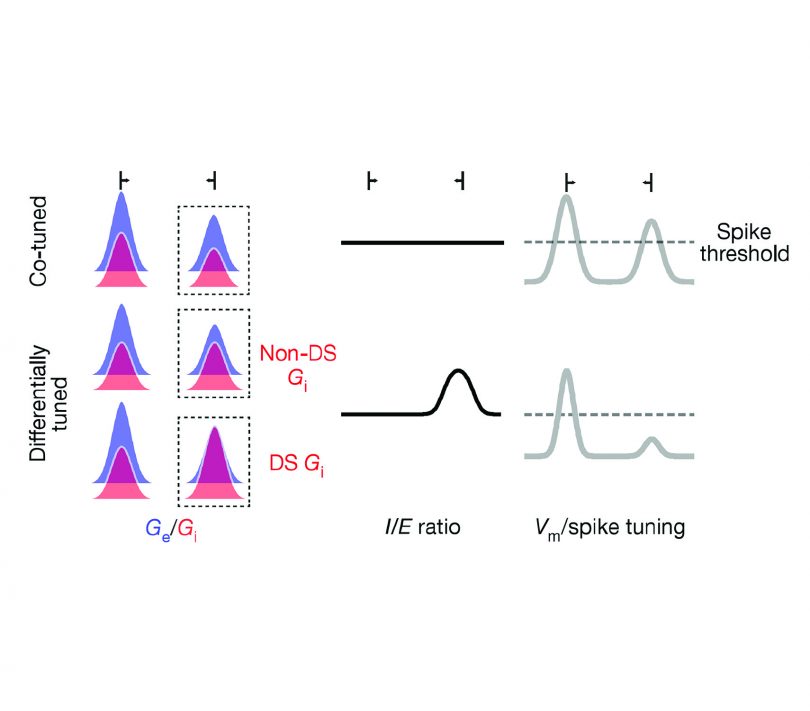 Researchers at the Max Planck Florida Institute for Neuroscience discover a fundamentally new role for inhibition in the visual cortex, refining how neurons encode object motion

Our brains do a remarkable job of encoding visual information about the world around us, providing an almost instantaneous report about rapidly changing conditions that is critical for guiding our behavior. Integral to the brain’s encoding mechanism is the presence of neurons that respond selectively to specific visual features, generating electrical activity that reliably signals properties such as the orientation of edges, their position in space, and their direction of motion. By using new tools to probe the principles of connectivity that neural circuits use to generate selective responses, scientists at the Max Planck Florida Institute for Neuroscience are gaining a host of new insights into the fundamental mechanisms underlying brain function.

Understanding how neural circuits build response selectivity poses an enormous challenge since a single neuron receives thousands of synaptic inputs derived from other neurons and these inputs can differ in their response properties and how they can affect the neuron. Some inputs are excitatory, making the neuron more likely to generate an electrical signal, while others are inhibitory, reducing the likelihood that the neuron generates a signal. Somehow a neuron integrates all of these excitatory and inhibitory synaptic inputs to generate responses that are selective, a mysterious ‘input/output transform’ that has been the subject of intense research interest.

Now in a recent publication in Nature, researchers in David Fitzpatrick’s Lab, Daniel Wilson, Ph.D., and Benjamin Scholl, Ph.D., have accumulated multiple lines of evidence that challenge both of these principles, providing a new perspective on how circuits in visual cortex employ excitation and inhibition to generate neuronal responses that are selective for an object’s direction of motion.

Beyond disentangling the mechanism responsible for direction selectivity, these discoveries emphasize the flexible ways in which neural circuits can integrate excitatory and inhibitory inputs to build the variety of selective response properties critical for neural coding. Like doesn’t always connect with like and excitation doesn’t always match inhibition, but you can count on brain circuits to have evolved the combination of inputs necessary to ensure high levels of functional performance.

This work was supported by National Institutes of Health, Max Planck Florida Institute for Neuroscience and Max Planck Society. The content of this article is solely the responsibility of the authors and does not necessarily represent the official views of the funding agencies.