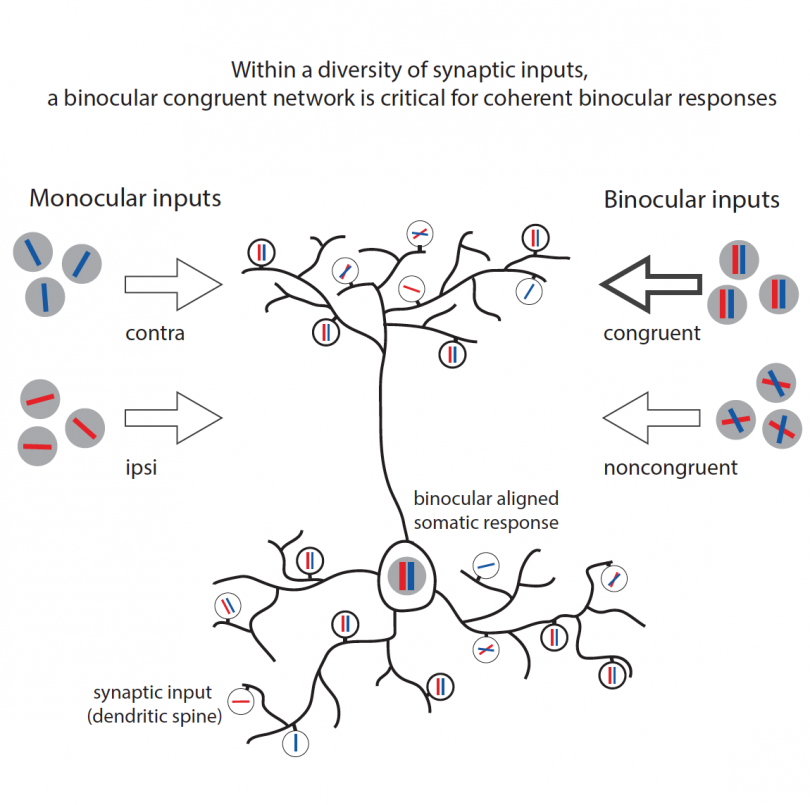 Everything we see, from a work of art to the laugh lines on a loved one’s face, are seen not only with our eyes but through complex networks of neurons that piece together information to create a picture in our brain. Information is taken in through the eyes and processed in incredibly complex ways: some neurons detect edges, others encode colors, still others interpret depth or motion. Each eye takes in information independently, and it’s up to the brain to piece it together into an accurate, coherent picture. This is known as “binocular vision.”

In a new paper published in the journal, Neuron, researchers from Max Planck Florida’s Fitzpatrick lab, led by Ph.D. student Clara Tepohl and former Postdoc Benjamin Scholl, report exciting new discoveries about what takes place in the brain when signals from the right and left eye come together.

Clara is a student in the joint FAU-MPFI IMPRS program. She studied physics at the University of Heidelberg, and went on to receive her master’s degree in neuroscience from the University of Göttingen, Germany before pursuing her Ph.D in the lab of Dr. David Fitzpatrick. Dr. Benjamin Scholl worked in the Fitzpatrick lab as a postdoc before going on to start his own lab at the University of Pennsylvania in the summer of 2021. Together, they set out to better understand how the brain “sees” the world.

“Binocular vision is a particularly interesting ‘problem’ to me,” Clara explained. “Having two eyes improves your vision in various ways but it also poses the problem that the brain must integrate the information from the two eyes. Each eye sees the world from a slightly different angle and yet we perceive one coherent image. How the brain and specifically individual cells manage to combine visual information from the two eyes so that it is properly aligned, is really fascinating to me.”

To better understand the neuronal circuits of vision, researchers used 2 photon calcium imaging to visualize the activity of individual cells and the inputs they receive from other cells via synapses on their dendritic spines. This allowed the researchers to measure what information the cells receive from other cells and how it is integrated during visual stimulation. Later, a smaller sample of these cells were studied using electron microscopy which allowed the researchers to measure the strength of each connection.

What they found is that individual cells receive a variety of different inputs. Some convey information from one eye only (monocular), some convey signals from both eyes (binocular). The simple but dominant idea in the field is that alignment comes from the convergence of matched monocular input streams onto individual neurons. However, they were surprised to find that the monocular inputs to the same neuron don’t match each other. Instead, they found that synaptic interactions between binocular cortical neurons generate aligned responses.

“I was at first surprised that binocular inputs were the key players for binocular alignment. Especially since they make up only 1/3 of inputs to a single cell and electron microscopy tells us they aren’t ‘stronger’ than other inputs. But with further analyses we found that they have additional properties that allow them to have a disproportionate impact in generating aligned responses ,” Clara said.

As a Ph.D. student, projects like this help Clara lay a foundation toward a scientific career. One of the benefits of Max Planck Florida’s IMPRS Ph.D. program is that students not only receive training, but they also benefit from mentorship, such as working with postdoctoral scholars like Ben. IMPRS students work in collaborative environments and are given opportunities to play key roles pursuing new and exciting questions. Clara, who has been an IMPRS student since 2018, has enjoyed the experience of discovering new insights.

“When we started this project, I was new in the lab and new to the technique, so recording the data was very exciting to me. Seeing individual cells and dendritic spines light up according to the stimulus you play, seeing the brain and such small components of it live in action – that was so fascinating to me and actually mesmerizes me to this day,” she said.

Now that the researchers have determined which inputs are most important to binocular alignment, the next step is to better understand where these inputs are coming from, and to unravel how these complex networks work together to create a coherent picture in our minds. Not only does this research have implications for disorders of the vision, but it is also an important piece of the puzzle of how the brain processes signals from distinct sources.

Whatever direction her research goes next, the entire team is looking forward to the challenge of studying sensory integration. “The computations the brain performs truly fascinate me and vision is a particularly intriguing example to me,” Clara explained. “At the level of the retina, all that is detected by little receptors is changes in luminance. From that, the brain manages to extract and distinguish various features, such as edge orientation, motion, and ultimately more complex objects like faces. How cool is that?”