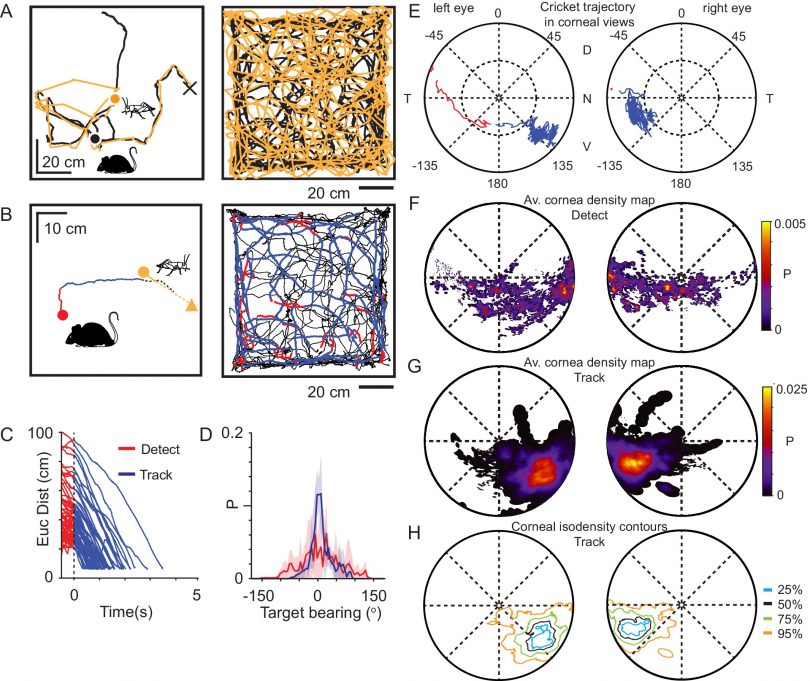 Mice have a large visual field that is constantly stabilized by vestibular ocular reflex (VOR) driven eye rotations that counter head-rotations. While maintaining their extensive visual coverage is advantageous for predator detection, mice also track and capture prey using vision. However, in the freely moving animal quantifying object location in the field of view is challenging. Here, we developed a method to digitally reconstruct and quantify the visual scene of freely moving mice performing a visually based prey capture task. By isolating the visual sense and combining a mouse eye optic model with the head and eye rotations, the detailed reconstruction of the digital environment and retinal features were projected onto the corneal surface for comparison, and updated throughout the behavior. By quantifying the spatial location of objects in the visual scene and their motion throughout the behavior, we show that the prey image consistently falls within a small area of the VOR-stabilized visual field. This functional focus coincides with the region of minimal optic flow within the visual field and consequently area of minimal motion-induced image-blur, as during pursuit mice ran directly toward the prey. The functional focus lies in the upper-temporal part of the retina and coincides with the reported high density-region of Alpha-ON sustained retinal ganglion cells.

Learn more about this study here.