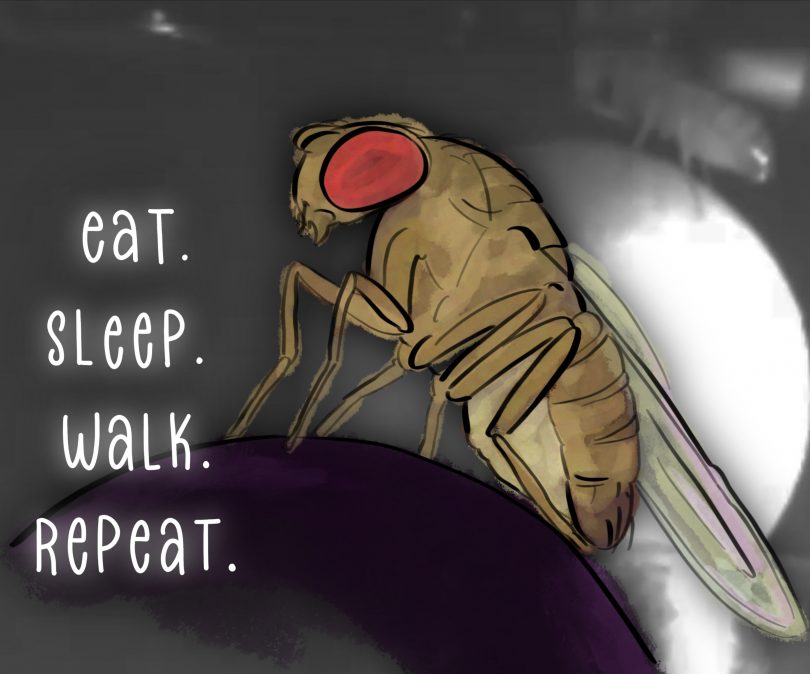 Researchers created an experimental set up where a fruit fly drosophila can walk, feed or sleep in a virtual reality setup while the activity of numerous nerve cells in its brain is recorded simultaneously.

A new automated experimental setup captures for the first time the activity of neuronal networks continuously for up to one week while an animal moves, feeds and sleeps. Researchers from the new Max Planck Institute for Neurobiology of Behavior – caesar developed a method that monitors the behavior of a fruit fly while it simultaneously records neuronal activity using advanced live cell imaging microscopy. This approach, published in the Journal of Neuroscience Methods, is a step forward to understanding what goes on in the brain during slow processes like learning and the formation of memory or how sleep or the day-night rhythm influence brain activity.

What is going on in the brain during feeding or walking, what is going on during sleep? And how does memory evolve? Relating the activity and function of neurons and neuronal networks to a certain behavior is a complex task. So far, continuous measurements in an awake animal have only been possible for up to one hour. Andres Flores-Valle, Rolf Honnef and Johannes D. Seelig from the research group “neural circuits” developed a method that allows to exceed this limitation considerably. They created an experimental set up where a fruit fly drosophila can walk, feed or sleep in a virtual reality setup while the activity of numerous nerve cells in its brain is recorded simultaneously. Recording times for up to one week include day-night rhythms and naturally occurring sleep. With advanced 2-photon-calcium imaging the activity of distinct sets of neurons is recorded for up to 60 seconds every 5 minutes. To validate the new method, the team started with recordings from so-called wedge neurons, which control the direction of the fly’s head. The activity of these well-known neurons matched the fly’s behavior. The new method does not only provide snapshots, but an almost complete documentation of the activity of the neurons of interest and it allows to analyze both fast and slow neuronal events.

Thus, the new automated long-term two-photon imaging opens up new possibilities to understand the underlying neuronal dynamics in a variety of behaviors over multiple timescales, for example during sleep, during the formation of long-term memory or during circadian changes.