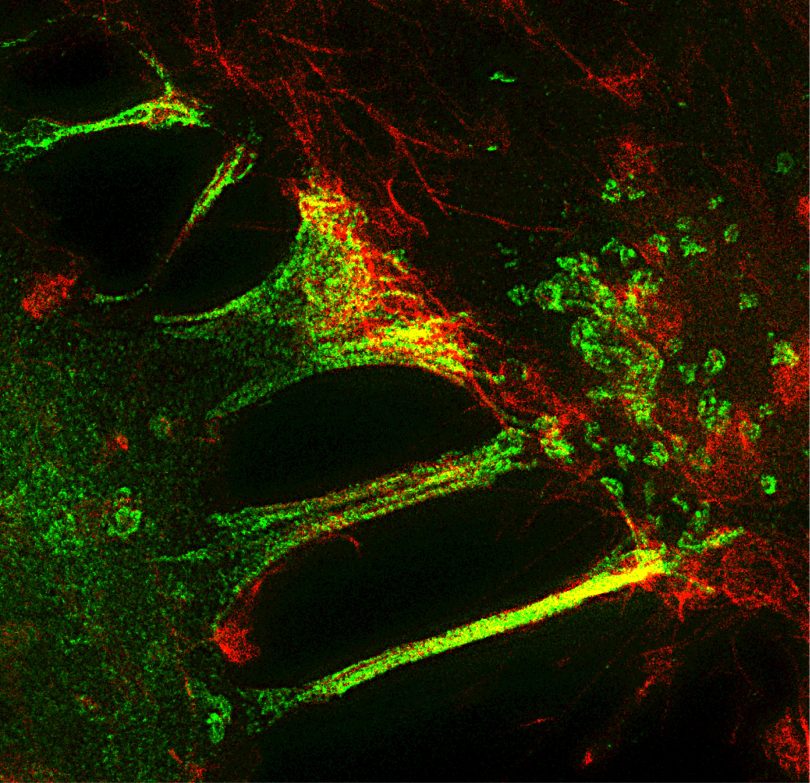 In order to dissolve a close bond as quickly as possible, cells sometimes nibble a piece off each other's cell membrane. The ephrin ligand in one cell (red) binds with the Eph receptor in a neighboring cell (green). The neighboring cell then devours the relatively large receptor-ligand complex (yellow). (c) MPI of Neurobiology / T. Gaitanos; published in JCB, Oct. 2019

Cells can cut up rough: They will sometimes even gnaw at a partner in order to get rid of it as quickly as possible. This mechanism, known as trogocytosis (Greek: trogo, to gnaw), is important for cell sorting and plays a role in processes as diverse as embryonic development and the interaction between tumor and immune cells. Researchers have now discovered important factors that coordinate this special type of cell interaction.
***

“Till death us do part” – cells don’t usually go to this extreme, but separation by trogocytosis does, in fact, involve a small amount of cannibalism.

An important way for cells to get in touch is the ephrin/Eph signaling pathway. The ephrin ligand in one cell (red in the graphic) binds with the Eph receptor in a neighboring cell (green). The neighboring cell then devours the relatively large receptor-ligand complex (yellow), virtually biting off its neighbor’s outstretched hand to enable separation. At least both cells survive the process, in contrast to phagocytosis.

The researchers found that this ephrin/Eph mediated trans-endocytosis resembles features of trogocytosis. “Trogocytosis is not well understood and different from phagocytosis, a well-studied process where one entire cell is eaten up by another”, relays Jingyi Gong from the Max Planck Institute of Neurobiology in Martinsried. “We wanted to decipher how trogocytosis is regulated.”

The international team of researchers from Rüdiger Klein’s department and from the University of Toronto (Canada) used fluorescence microscopy to view trogocytosis in action and analyzed the proteins involved.

The researchers discovered that clusters of Gulp1, a protein familiar to phagocytosis, accumulate temporarily on the ephrin/Eph complex of both cells. Subsequently, the ephrin/Eph complex is devoured by the cells. Tiam2, a protein that stimulates the reorganization of the cytoskeleton, supports Gulp1 in this process. In addition, Gulp1 also recruits the protein dynamin, initiating the internalization process on the membrane.

“We could thus demonstrate that mechanisms which play a role in the ephrin/Eph trogocytosis overlap with those involved in phagocytosis,” explains Thomas Gaitanos, joint lead author of the study. The team now plans to investigate under what conditions trogocytosis can occur in the brain and whether this ability can be exploited for the regeneration of injured brain areas.