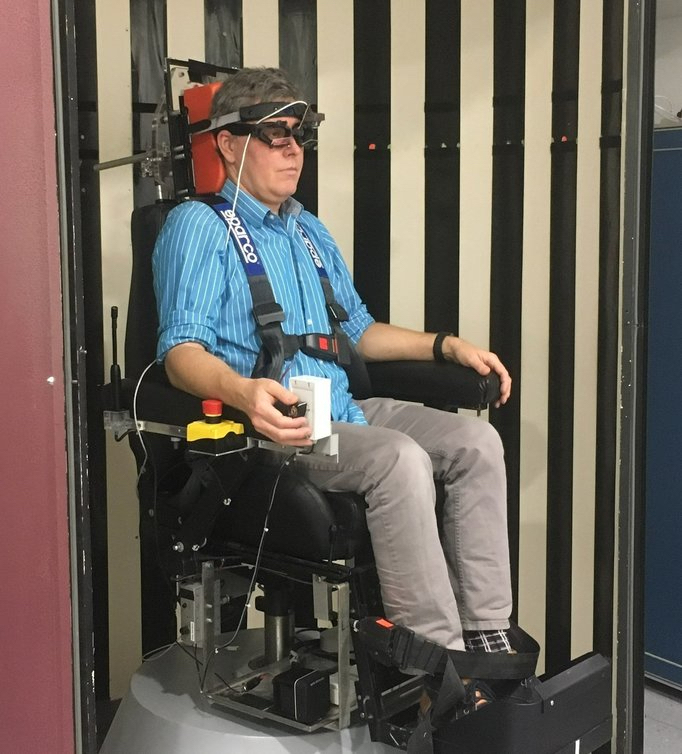 A test person on the motorized rotating chair.

A joint team of researchers of the Max Planck Institute for Biological Cybernetics and the University Hospital Zurich was able to show that the level of motion sickness depends on what your beliefs about the actual motion are. This offers new perspectives on possible therapies.

Playing a videogame or watching a movie on a large screen can make you feel fully immersed in a different reality. The camera movements may create the illusion that you are jumping from liana to liana or riding into battle on horseback, while in fact you are sitting on your couch without moving an inch. Unfortunately, such an illusory experience of self-motion can make you nauseous or giddy.

The team of scientists was able to confirm experimentally that it depends on a person’s beliefs whether or not they experience these symptoms. “Sickness occurs less when you really believe that you are moving,” explains Suzanne Nooij, a researcher at the Max Planck Institute for Biological Cybernetics in Tübingen. This finding may offer a low-cost countermeasure to motion sickness: your imagination.

Visual motion illusions can also be encountered in daily life; for example, when you are sitting in a train waiting for departure and the train on the adjacent platform leaves the station, you might think for a moment that your train is moving. When such an illusory self-motion provokes motion sickness, it is usually explained in terms of sensory conflict: your eyes tell you that you are moving, while the equilibrium organ in the inner ear signals that you are not. In an experiment the scientists showed that your beliefs about the actual motion are also important, and that sickness mostly occurs if you believe the actual motion is different from the motion you experience.

To investigate the influence of beliefs in motion sickness, Nooij and her collaborators performed an experiment with volunteers. Participants were seated on a motorized rotary chair inside a cylindrical drum. Both the drum and the chair could rotate independently from each other.

The participants were shown that both drum and chair could rotate, but were not told that the chair would remain stationary during the 20-minute test, and that only the drum would be moving. They were asked to indicate their perceived self-rotation with a knob, and they scored their level of motion sickness every 2 minutes. After the test they were asked about what they thought happened.

All participants experienced periods of self-rotation during the test, but the level of sickness depended on the difference between the perceived self-motion and the beliefs about the actual motion. Those who believed that their sensory perception was accurate–that the chair was indeed rotating–did not get sick, as their belief was perfectly in line with their experience.

Others, who also experienced rotation but were very certain that the chair had in reality remained stationary, were however developing symptoms. These results show that it is not the sensory conflict per se that is causing the sickness, but the clash between the perceived and believed motion. Or, as Suzanne Nooij puts it: “When it comes to motion, it seems that those who believe what they perceive fare better than those who do not.”

The insights the scientists got may offer possibilities to counteract motion sickness. While it may not always be easy to affect how the motion is perceived, it may be possible to alter the beliefs about what is really happening. Your imagination can be a promising tool for that: an astronaut who was exposed to motion illusions during a motion sickness test reported that he could suppress his motion sickness when imagining himself on a fairground attraction moving in accordance with what he felt. The researchers are hoping to investigate in the future if mental imagery like this can help to effectively fight motion sickness. So if you suffer from nausea and dizziness when playing games, you might just need to let your imagination take flight.