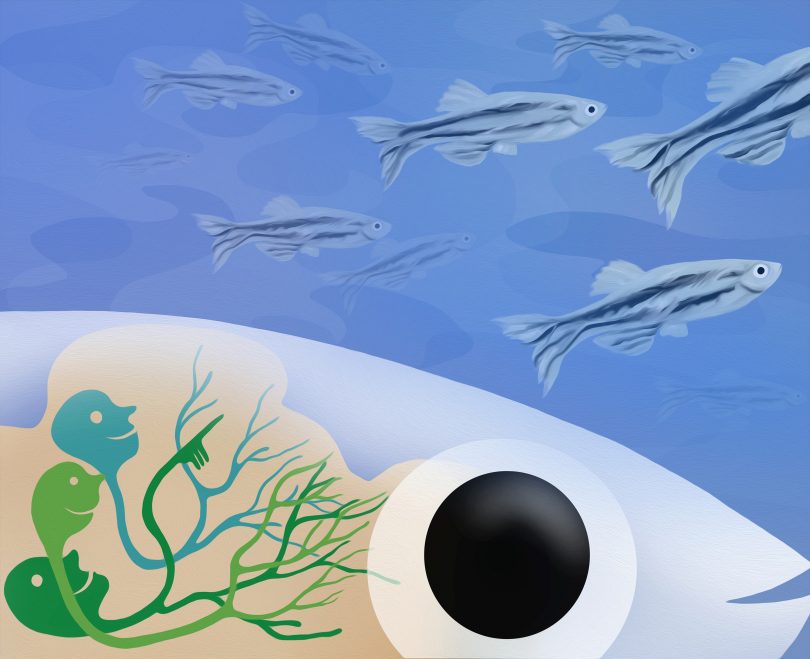 Humans are famously social animals. But they are not alone in their tendency to team up with other individuals of the same species (conspecifics) to reach their goals. In fact, herds of mammals, flocks of birds, or shoals of fish are abundantly observed in nature. How does an animal’s brain recognize other animals of its own kind? Scientists at the Max Planck Institute for Biological Intelligence, in foundation, study this process in young zebrafish. They now discovered a neuronal circuit that mediates social attraction. This specialized pathway, which runs from the retina deep into the brain, enables zebrafish to detect and approach nearby conspecifics.

Humans and many other animals live in societies. At a fundamental level, social interactions require individuals to identify others as belonging to their own kind. This usually happens in fractions of a second, often instinctively. Unveiling the neuronal circuits that underly this behavior, however, is anything but trivial.

“There’s an inbuilt challenge in studying social interactions: For us as observers, actions and reactions are intermingled, both in animal behavior and at the neuronal level,” explains Johannes Larsch, project leader in Herwig Baier’s department. “This is because individuals taking part in these interactions influence each other. Both are, at the same time, senders and receivers of social signals. It has been particularly hard to investigate the role of the visual system and its associated brain areas.”

Johannes Larsch’s team nevertheless found a way to elucidate the importance of the visual system in social interactions. The scientists developed an experimental virtual reality setup for zebrafish larvae that simulates conspecifics. All that is needed is a projected dot on a screen, which – and this is important – moves across the display with a jerky movement pattern that is stereotypical of swimming zebrafish. The animals cannot resist this cue: They follow it around for hours, apparently confusing the moving dot with a real conspecific. The researchers had thus discovered a defined visual stimulus that triggers shoaling behavior.

The team could now investigate the neuronal processing of the stimulus. To do so, they extended their virtual-reality setup enabling them to simultaneously measure activity in the fish brain. The experiments revealed that a moving dot activates a specific set of neurons in a brain region known as the thalamus. The same area of the thalamus gets activated when another zebrafish larva swims nearby.

“The thalamus is a sensory control center of the brain that integrates and relays sensory inputs,” explains Johannes Larsch. Sensory information is processed on its route to the thalamus, first in the retina and then in the tectum, a major visual center of the vertebrate brain. By the time the information arrives in the thalamus, it has already been filtered for social cues, such as the jerky movements of a potential conspecific.

The nerve cells identified by the researchers in this region connect the visual system of the zebrafish with other brain regions that are active during social behavior. “We already knew that these other brain regions play a role in controlling social behavior. However, the visual stimuli that activate them were unknown. Our work has filled this knowledge gap and has revealed the neuronal pathways that transmit the signals,” says Larsch.

The importance of the newly identified neurons was confirmed when the researchers specifically blocked the function of these cells. Zebrafish larvae lost their interest in conspecifics as well as moving dots and hardly followed them around anymore.

“The neurons we discovered thus regulate social approach and affiliation in zebrafish,” says Johannes Kappel, graduate student and lead author of the study. “Humans possess a thalamus, too, and many neuronal processes have been conserved during evolution. We also have brain regions that are active when we perceive facial movements or body motion, but the significance of these regions for social behavior has not been explored.”

The study by Kappel, Larsch, Baier and their collaborators has shed light on a part of the brain whose activation provides the elementary “glue” for the bonding of two zebrafish. Collectively, such small-scale interactions create shoals of fish. Social behavior is driven by networks of brains, which are themselves networks of neurons. Concludes Baier: “Neurobiological findings, such as ours, can perhaps inspire and enrich the thinking about the self-organization of animal societies in general, which is currently the domain of other scientific disciplines.”