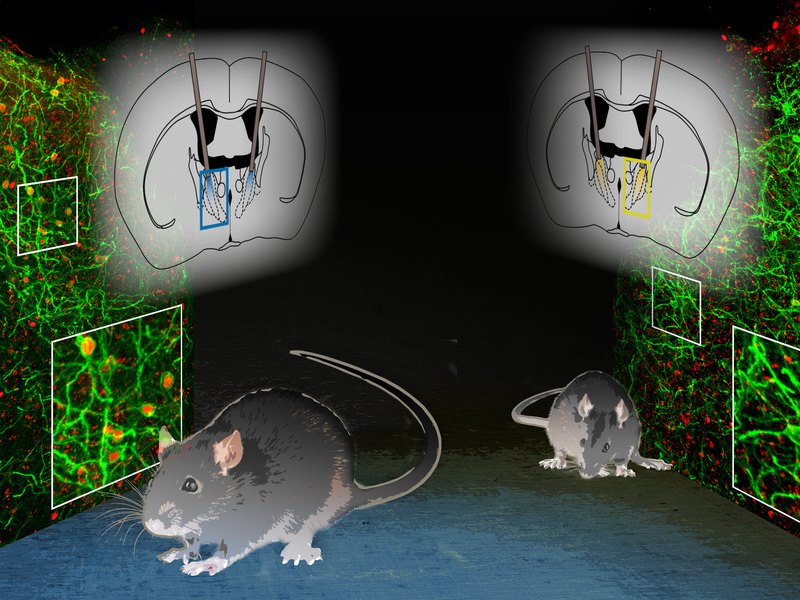 The experiments showed the different level of anxiety of mice in stressful situations. © Tali Wiesel, Weizmann Institute of Science

The bed nucleus of the stria terminalis (BNST) is critical in mediating states of anxiety, and its dysfunction has been linked to stressrelated mental disease. Although the anxiety-related role of distinct subregions of the anterior BNST was recently reported, little is known about the contribution of the posterior BNST (pBNST) to the behavioral and neuroendocrine responses to stress. Previously, we observed abnormal expression of corticotropin-releasing factor receptor type 2 (CRFR2) to be associated with post-traumatic stress disorder (PTSD)-like symptoms. Here, we found that CRFR2-expressing neurons within the pBNST send dense inhibitory projections to other stress-related brain regions (for example, the locus coeruleus, medial amygdala and paraventricular nucleus), implicating a prominent role of these neurons in orchestrating the neuroendocrine, autonomic and behavioral response to stressful situations. Local CRFR2 activation by urocortin 3 depolarized the cells, increased the neuronal input resistance and increased firing of action potentials, indicating an enhanced excitability. Furthermore, we showed that CRFR2-expressing neurons within the pBNST are critically involved in the modulation of the behavioral and neuroendocrine response to stress. Optogenetic activation of CRFR2 neurons in the pBNST decreased anxiety, attenuated the neuroendocrine stress response, ameliorated stress-induced anxiety and impaired the fear memory for the stressful event. Moreover, activation following trauma exposure reduced the susceptibility for PTSD-like symptoms. Optogenetic inhibition of pBNST CRFR2 neurons yielded opposite effects. These data indicate the relevance of pBNST activity for adaptive stress recovery.