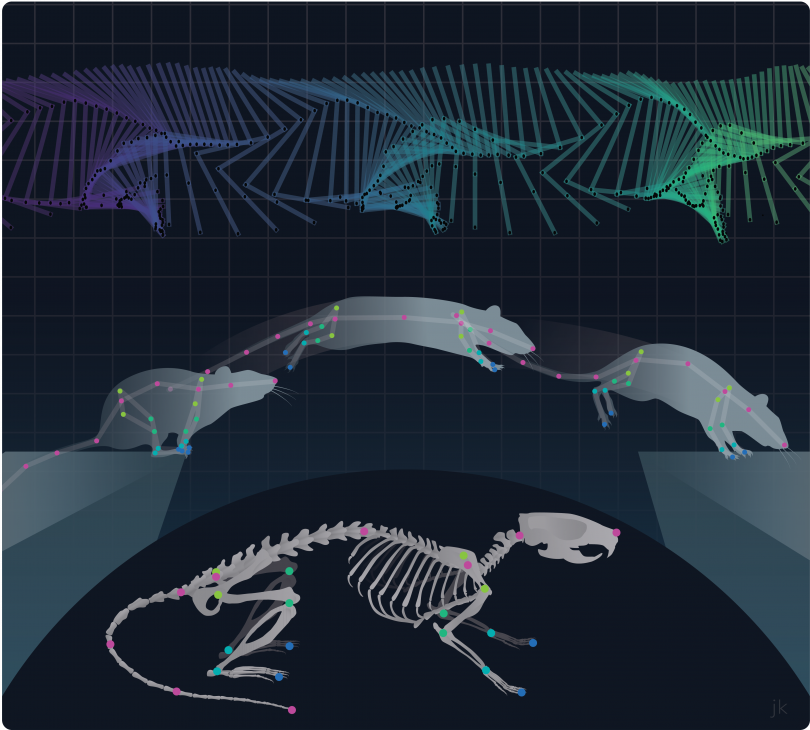 How can we measure a skeleton’s motion in a furry animal as it moves through its environment? Researchers at the Max Planck Institute for Neurobiology of Behavior – caesar have developed a new method to quantify skeletal motion in freely moving rodents in a new level of accuracy and detail. It is based around building a skeleton-model that calculates bone joint movement using basic anatomical principles, such as joint rotation limits, and speeds at which bodies can move. This approach, published in Nature Methods, opens up a new ability to read out how animals interact with their environment and, as the brain and spinal cord drives movement, start unravelling the relationship between neuronal activity and complex behavior such as decision-making.

Have you ever thought about how your skeleton moves as you go about your day? When we think about this question, x-ray images immediately come to our mind. But how would we measure a skeleton’s motion without using x-ray in an animal which runs or jumps around and interacts with its environment? And why would this be important? Studying the freely moving animal gives unparalleled insights into how animals behave and make decisions, for example when they avoid predation, find mates and raise their young. While many studies have measured animal behavior, studies that measure the mechanics of how they move have been missing. But as activity in the central nervous system ultimately leads to decisions that are enacted through body movements, measuring these mechanics and relating them to neural activity is essential for gaining deep insights into brain function.

Without an x-ray machine, analyzing movements of individual bones is extremely challenging as occluding overlaying fur, skin and soft tissue make it complicated to get a measurement of the skeleton’s motion. Recently, several advanced machine-learning methods have been able to accurately measure an animal’s pose and even changes in an animal’s facial expression; however, so far none of the existing techniques have been able to track the changes in bone positions and joint motion under visible body surface.

Researchers of the department Behavior and Brain Organization at the Max Planck Institute for Neurobiology of Behavior in Bonn (MPINB), headed by Prof.Dr. Jason Kerr, have now developed a videography-based method for 3D-tracking the skeleton at the resolution of single joints in untethered animals while they interact with their environment. Their Anatomically Constrained Model (ACM) is based on an anatomically grounded skeleton that infers the skeletal kinematics of an animal as it moves freely around. From this data it was possible to measure the inner workings of a skeleton, moment to moment, as the animals jumped, walked, stretched and ran around. This new approach can be applied to multiple furry species such as mice and rats of different sizes and ages. To ensure that the data was right, the researchers worked with colleagues from the Max Planck Institute for Biological Cybernetics in Tübingen actually using MRI scanning of the animals to compare the ACM model to the actual skeleton. “Our new method is relatively simple, tether-free and uses overhead cameras. It solves many problems associated with tracking freely moving rodents, especially those that are covered in fur and when the body covers the legs and feet” says Prof. Dr. Jason Kerr, who ran the study together with Prof. Dr. Jakob Macke from the Eberhard Karl University of Tübingen. One of the next steps is to combine this approach with simultaneous recordings from neurons in the brain using the miniature head-mounted multiphoton microscopes the researchers at the MPINB have developed. This would allow to exactly correlate neural activity with actual behavior to find out more about how the brain controls even complex behavior.

The researchers will also apply their new method to measure motion kinematics in other animal species in more natural environments and simultaneously in multiple, interacting animals. “Using our new method, we will on one hand gain further insights on how animals interact with their environment and, on the other hand, we hope to gain knowledge of how animals interact with each other.” says Jason Kerr.