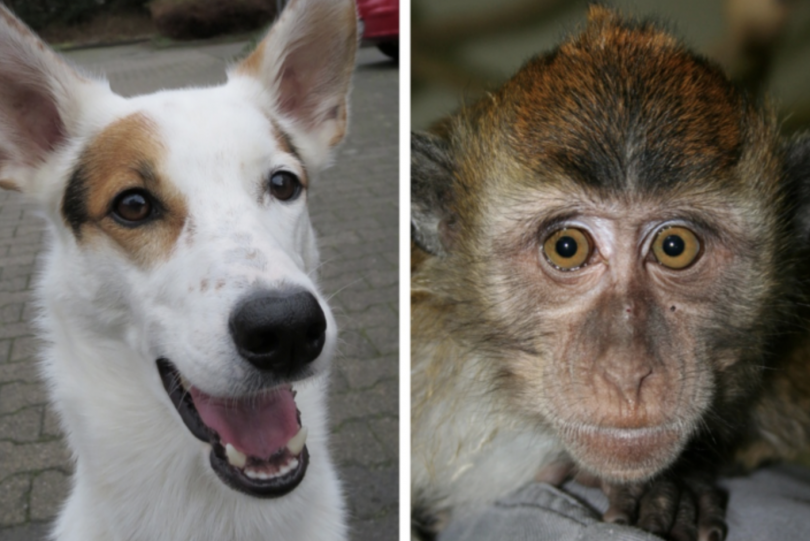 Certain photoreceptors in the eyes of dogs and macaques contain the molecule cryptochrome 1, which could act as a magnetic field detector. (photos: Leo Peichl)

Dog-like carnivores and some primate species may have a magnetic compass similar to that of birds.

Cryptochromes are light-sensitive molecules that exist in bacteria, plants and animals. In animals, they are involved in the control of the body’s circadian rhythms. In birds, cryptochromes are also involved in the light-dependent magnetic orientation response based on the Earth’s magnetic field: cryptochrome 1a is located in photoreceptors in birds’ eyes and is activated by the magnetic field. Now researchers from the Max Planck Institute for Brain Research in Frankfurt have also detected cryptochrome 1 in photoreceptors in several mammalian species. Therefore, it is possible that these animals also have a magnetic sense that is linked to their visual system.

Together with colleagues from the Ludwig-Maximilians-University Munich, the Goethe University Frankfurt, and the Universities of Duisburg-Essen and Göttingen, Christine Nießner and Leo Peichl from the Max Planck Institute for Brain Research in Frankfurt investigated the presence of cryptochrome 1 in the retinas of 90 species of mammal. Mammalian cryptochrome 1 is the equivalent of bird cryptochrome 1a. With the help of antibodies against the light-activated form of the molecule, the scientists found cryptochrome 1 only in a few species from the carnivore and primate groups. As is the case in birds, it is found in the blue-sensitive cones in these animals. The molecule is present in dog-like carnivores such as dogs, wolves, bears, foxes and badgers, but is not found in cat-like carnivores such as cats, lions and tigers. Among the primates, cryptochrome 1 is found in the orang-utan, for example. In all tested species of the other 16 mammalian orders, the researchers found no active cryptochrome 1 in the cone cells of the retina. .

The active cryptochrome 1 is found in the light-sensitive outer segments of the cone cells. It is therefore unlikely that it controls the animals’ circadian rhythms from there, as this control occurs in the cell nucleus which is located a considerable distance away. It is also unlikely that cryptochrome 1 acts as an additional visual pigment for colour perception. The researchers thus suspect that some mammals may use the cryptochrome 1 to perceive the Earth’s magnetic field. In evolutionary terms, the blue cones in mammals correspond to the blue- to UV-sensitive cones in birds. It is therefore entirely possible that the cryptochrome 1 in mammals has a comparable function.

Observations of foxes, dogs and even humans actually indicate that they can perceive the Earth’s magnetic field. For example, foxes are more successful at catching mice when they pounce on them in a north-east direction. “Nevertheless, we were very surprised to find active cryptochrome 1 in the cone cells of only two mammalian groups, as species whose cones do not contain active cryptochrome 1, for example some rodents and bats, also react to the magnetic field,” says Christine Nießner.

One possible explanation for this is that animals can also perceive the magnetic field in a different way: for example, with the help of magnetite, microscopic ferrous particles in cells. A magnetite-based magnetic sense functions like a pocket compass and does not require any light. Mole rats, which live in lightless tunnel systems, orient using this kind of compass. Birds also have an additional orientation mechanism based on magnetite, which they use to determine their position.

Many fundamental questions remain open in the research on the magnetic sense. Future studies will have to reveal whether the cryptochrome 1 in the blue cones is also part of a magnetic sense in mammals or whether it fulfils other tasks in the retina.