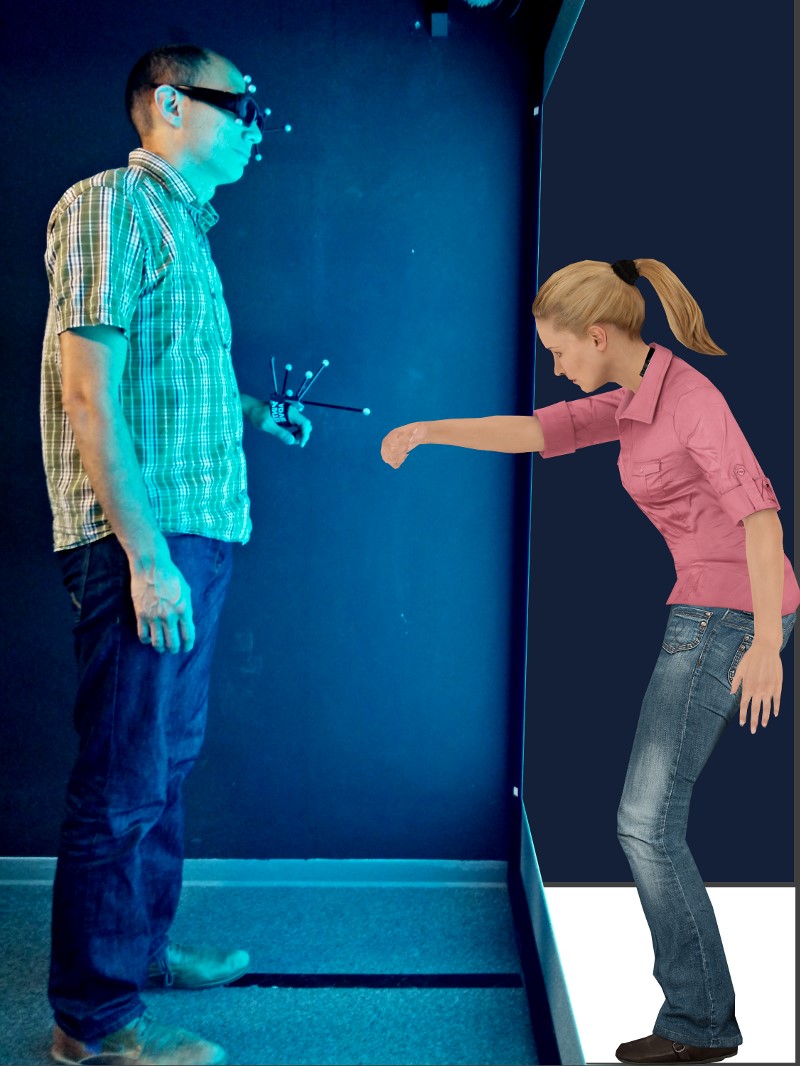 When someone standing opposite us purposefully raises their arm to make some kind of movement, our brain asks itself whether they intend to attack us or, perhaps, simply greet us. Scientists from the Department of Human Perception, Cognition and Action at the Max Planck Institute for Biological Cybernetics in Tübingen have studied what actually goes on in our heads during action recognition in detail, and how the mirror neurons contribute to this process. To do this, the team headed by Stephan de la Rosa placed its test subjects in a virtual reality setting.

It is suspected that mirror neurons enable us to empathize and put ourselves ‘in other people’s shoes’. When we see that someone has been injured, we also experience internal suffering: these special neurons cause what we see to be simulated in our brain in a way that makes us feel as though we are experiencing it in our own bodies.

In perception research, it is assumed that mirror neurons enable people go through a movement they have seen in their own motor system. This internal recreation of what we have seen probably enables us to infer the meaning of the observed action. The mirror neurons act as the switching point between the motor and visual areas of the brain. Conversely, when the motor system is supposed to be the determining factor in the classification of an action, it means that the perception can also be manipulated by our own implementation of an action.

In their study, the researchers analyzed the mechanism by which the brain recognizes an action. To do this, they showed the test subjects two different movements: a punch and a greeting gesture known as the ‘fist bump’, practised by young males in particular. The researchers arranged the scenario as realistically as possible. A life-sized avatar was shown on a screen facing the test subjects. With the help of special data glasses, the latter were able to see their virtual partners in three dimensions – the avatar’s movements appeared as though they were unfolding within the test subjects’ reach.

All the test subjects actually had to do was to decide whether they were being presented with an aggressive punch or well-intentioned greeting. However, the scientists made the conditions more difficult by combining the two gestures in a single movement. The avatar’s intentions were thus a matter of interpretation.

The question behind the experiment then was whether people allow themselves to be influenced by their own motor system when interpreting the actions of others. The test subjects were manipulated in different ways in the experiment: they could observe a clearly identifiable action played in a continuous loop on a screen. They became active at the same time themselves by carrying out air punches, for example. They were then asked to assess how the indefinable movement of the avatar should be interpreted.

I only believe what I also see

When the two sensory stimuli were played out against each other – that is the test subjects saw a fist bump in front of them while carrying out a punch movement themselves – the visual impression was the clear winner. The subject’s own movement did not have any influence on the perception. Contrary to what was previously assumed, the motor system had little or no influence on the participants’ assessment of the movement. To the astonishment of the scientists, the mirror neurons associated with the motor system clearly did not have any major role to play in the action recognition process.

With their experiment set up, the team was able to study the contribution of the motor system to action recognition during social interaction for the first time and, thereby also the existing theory on the interaction between mirror neurons and stimulus processing. “Contrary to what was previously assumed, the mirror neurons do not have a particularly significant influence on the interpretation of an action. Visual perception is namely far more important for our brain – in social situations, we rely almost exclusively on what we see,” says the head of the study, Stephan de la Rosa, summarizing the study findings.