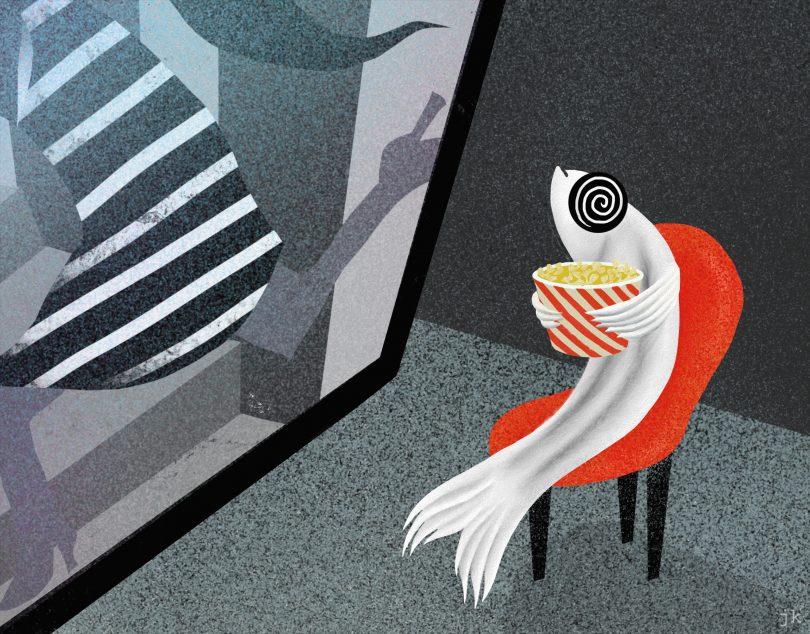 By triggering the waterfall illusion in zebrafish, researchers identified a subset of neurons that are responsible for seeing motion. (c) MPI of Neurobiology / Kuhl

Interview with Yunmin Wu from the Max Planck Institute of Neurobiology, who identified neurons enabling zebrafish to detect motion.

Yunmin Wu is interested in how we perceive motion. Inspired by a cat video, she came up with the elegant idea to elicit the waterfall illusion in tiny zebrafish larvae. Thereby, the PhD graduate in Fumi Kubo’s1 group from the department of Herwig Baier gained surprising insights into the neuronal mechanism of seeing motion.

Can you elaborate on your topic of research and why you work with the model organism zebrafish?

Inside the brain, there are many neurons that process motion and its direction. As these neurons are quite abundant, I am interested to find out if all of them are required to recognize motion. For this, larval zebrafish is an amazing animal model – it is small, transparent, and demonstrates so many complex behaviors that we humans also display.

How did you come up with the idea of an optical illusion as a tool to study motion processing?

I was inspired by a video, in which a cat was trying to capture an illusory moving snake. I asked myself if an illusion that affects us humans might also apply to zebrafish. If that is the case, I can then look into the brain and see which neurons are involved. With the help of my supervisor Fumi, I chose the motion aftereffect eventually among many other cool illusions.

Can you explain the motion aftereffect (MAE), also known as waterfall illusion?

The motion aftereffect is a very old illusion, first described by Aristoteles. If you look at something moving like a waterfall for some time and then look at something stationary, the stationary object will appear to move in the opposite direction to the previously observed motion. In the case of a waterfall, the illusory movement will be upwards. The MAE creates quite a unique scenario, as the sensation of motion is not caused by real movements. Instead, it is generated entirely inside the brain.

To many it might sound unexpected that you gained insight into the brain using the motion aftereffect – illusions are often regarded as faulty processing of the brain.

Instead of thinking of illusion as a deficit, I would rather say it is a window into how the brain operates. Even without doing any imaging or probing, it already gives us a glimpse of how the brain processes information of the environment. So illusions are not just interesting phenomena. For a scientist, they are also a very useful tool.

Fish can’t tell you what they are seeing. How did you test if they experience the waterfall illusion?

We built a set-up you can think of as a cinema. The fish sits in the middle watching a movie of moving stripe patterns, called gratings. At the same time, we record the eye movement of the fish, which tells us exactly if and in which direction it sees motion. Using this as a readout, we were able to tell that the fish experiences illusory motion in the opposite direction when the moving gratings stopped.

Having established this set-up, can you explain your next steps?

We asked ourselves which brain regions are responsible for this illusion. We turned to optogenetics, light-controlled “switches” that turn neurons on or off. Basically, we turned different brain areas off and found that the pretectum, a tiny part playing a major role in the visual system, is essential for the fish to experience the waterfall illusion. With two-photon imaging, we identified that out of a big pool of neurons responsive to motion, only half of them were active during the illusion. Looking at their spatial distribution, we found that these neurons form a cluster in the pretectum. This gave us the opportunity to specifically target and manipulate this subgroup of neurons. Interestingly, when we removed neurons from the cluster, the fish became motion-blind. In contrast, when we turned these neurons on, we were able to induce motion-specific eye movements without any actual motion.

What is the conclusion of your study and why is it that special?

Using our illusion approach, we narrowed down from a large number of neurons and homed in on just a handful of them that are not only required, but also sufficient for the fish to see this kind of motion. This offers a new perspective, as people previously thought that motion responses depend on broadly distributed networks.

What excites you most about your study?

The illusion part – I am always excited to talk about it and to see that it gets people excited. It is also fascinating to think about “seeing is not believing”. Illusions remind us what we perceive is a processed version of reality. We should keep that in mind and not always be limited to our own perception.