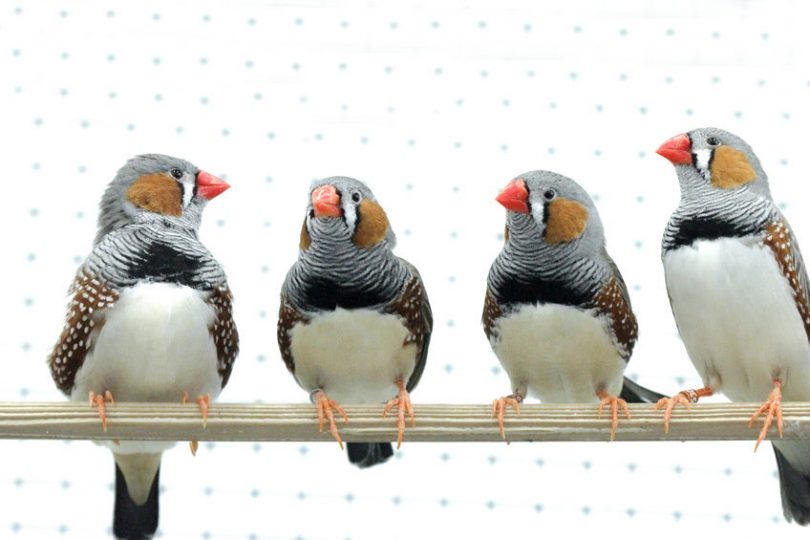 Zebra finches take turns when exchanging short calls with one another. A coordinated communication is important as this species lives in large colonies. Here a group of male zebra finches.

Zebra finches can take turns when exchanging short calls with one another, much like humans do during conversations. Researchers from the Max Planck Institute for Ornithology have now shed light on the underlying neural dynamics in a songbird brain area called HVC, or the so called “song control centre”. The researchers identified neurons involved in initiating a call as well as another class of neurons that inhibits neighboring cells shortly before a bird calls. The importance of these cells for vocal turn-taking was further supported by the observation that specific disruptions to the signaling of either type of neuron resulted in distinct changes in call timing.

Imagine if every time you started a conversation, the other person would speak as soon as you began talking. Not only would this be considered rude, it would be difficult to hear each other and the interaction would not get very far. In our everyday conversations we rely on our ability to take turns and to avoid speaking at the same time. We do this so effortlessly that we often take it for granted. This feat involves withholding or delaying our responses when we hear another person speaking and initiating our speech once they’ve stopped. In other words, what you hear does not only influence what you say but also when you say it.

Other animals perform similar back-and-forth vocal exchanges. However, the underlying neural mechanisms of this vocal turn taking were so far unknown. Therefore, Jonathan Benichov and Daniela Vallentin from the Max Planck Institute for Ornithology started a study with zebra finches, small Australian songbirds, to find out how they coordinate their simple short calls during interactions. It has been shown that a forebrain cortical region called HVC is centrally important for song learning and production. “We thought that this specialized area in the zebra finch brain is a good place to look for an explanation of how vocal turn-taking is achieved”, says Jonathan Benichov, first author of the study. This area is known to act like a metronome to control the tempo of the elaborate courtship song that males learn from a tutor as they grow up. Benichov and Vallentin found that neurons in this area are also important for controlling the timing of the simpler short calls used in ordinary social interactions. In this case the area can act like a traffic light that determines when to call and when to wait.

The researchers recorded from individual nerve cells in this brain area using electrodes that are 1/50th the width of a human hair. This is done with a lightweight electronic device that the bird can wear on its head while it moves around, sings, and interacts with another bird or with recordings of another bird’s calls. With this, they found that some brain cells in HVC were active a few milliseconds before a bird actually calls, hinting that these neurons are involved in initiating a call. They also found similar cells that had their activity turned down right before a bird’s call. “This led us to look at another type of cell that is known to quiet down neighboring cells”, explains Daniela Vallentin, head of the research group Neural circuits for vocal communication. These activity-suppressing cells turned out to be active before the cells that cause the bird to call, suggesting that they control when this call initiating signal occurs.

To test this directly, the researchers chemically blocked the action of these inhibitory cells and found that the call-initiating cells produced stronger and earlier signals. Moreover, the birds responded much faster to a partner and were more likely to interrupt the calls they heard.

Both humans and songbirds have specialized neural pathways which link hearing areas to vocal areas. Perhaps there are also parallels across species with respect to how we avoid interrupting each other.