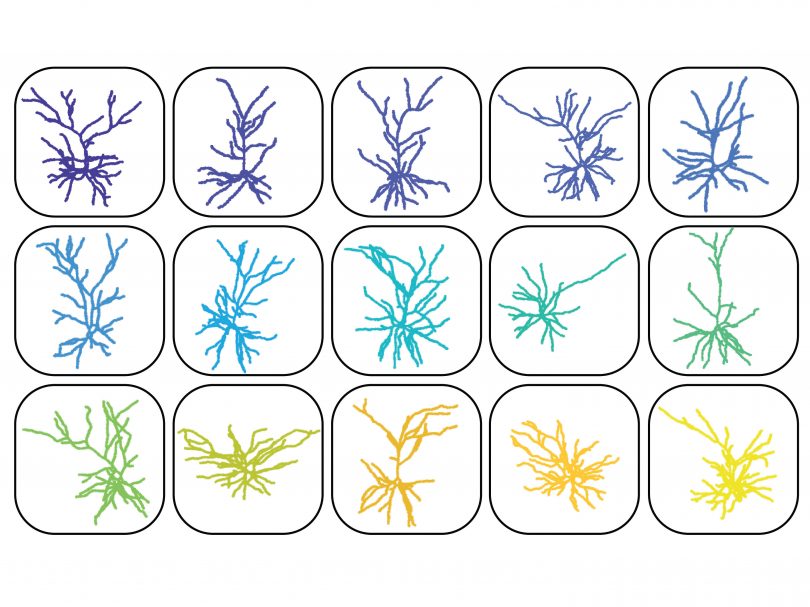 Pyramidal cells in mouse visual cortex respond selectively to the orientation and direction of objects, as assessed by moving stripe patterns. Now it turns out that these preferences of neurons are linked to an asymmetric arrangement of their dendrites and connection partners. © MPI for Biological Intelligence, i.f. / Simon Weiler

Structure and function of neurons are closely linked in the cerebral cortex.

One of the most exciting questions in neuroscience is how the function of a neuron is related to its structure and spatial connectivity. Researchers at the Max Planck Institute for Biological Intelligence, in foundation (i.f.) have now gained new insights into this: Neurons in mouse visual cortex respond to a certain orientation and movement of an object. Now it turns out that both the structure of a neuron and the arrangement of its connection partners reflect this behavior. In particular, asymmetric structures seem to have a decisive influence on object perception.

In order to navigate in our environment and to react to potential dangers, we must be able to recognize and process shapes and movements. Visual signals travel from our retina to the visual part of the cerebral cortex, where neurons such as so-called pyramidal cells process these incoming signals.

Individual neurons react to different aspects of our surrounding visual scene, such as orientation or the movement of an object. The interconnection and communication between these neurons ultimately ensure a coherent visual perception.

However, it is still unclear how the structure and the connections to neighboring cells influence the function of individual neurons. Is there a direct relation between the structure of a single neuron, its connectivity in the network, and the cell’s functional role in object and movement perception?

Neurobiologists led by Volker Scheuss from Tobias Bonhoeffer’s department have now been able to gain new insights into the relationship between function, structure and connectivity at the level of individual neurons. To do so, the researchers combined state-of-the-art methods: First, they used a two-photon microscope to examine the orientation and direction selectivity of specific pyramidal cells in mouse visual cortex. The scientists then reidentified the same neurons in tissue sections, studied their cellular morphology and mapped their connections to other neurons.

With this data set, it was now possible to directly link the response properties of pyramidal cells to the arrangement of their dendrites – the cell’s processes that receive information from other neurons. In addition, the researchers were able to analyze how the pyramidal cells’ connecting partners are spatially arranged and to compare this with the functional response pattern.

In doing so, the lead authors Simon Weiler and Drago Guggiana Nilo revealed two important relationships. First, in neurons that respond strongly to a particular object orientation, the spatial arrangement of their dendrites in cortex reflects that preference. In this case, a large portion of the dendritic tree is not arranged symmetrically, but asymmetrically along the cell’s preferred orientation.

Second, the neurobiologists found that the spatial arrangement of locally connected neurons is also asymmetric. This was directly related to the selectivity of the pyramidal cells for particular directions of object motion: The connection partners were more abundant on the side of the cell that pointed opposite to its preferred direction. Intriguingly, the degree of this asymmetry was directly coupled to the strength of the directional selectivity. The more selective a neuron responded to a direction, the more asymmetrically its connection partners were arranged.

Thus, the study shows how closely function and structure are intertwined in the brain. Asymmetric structures seem to form important building blocks for neuronal processing both at the level of individual cells and at the network level.