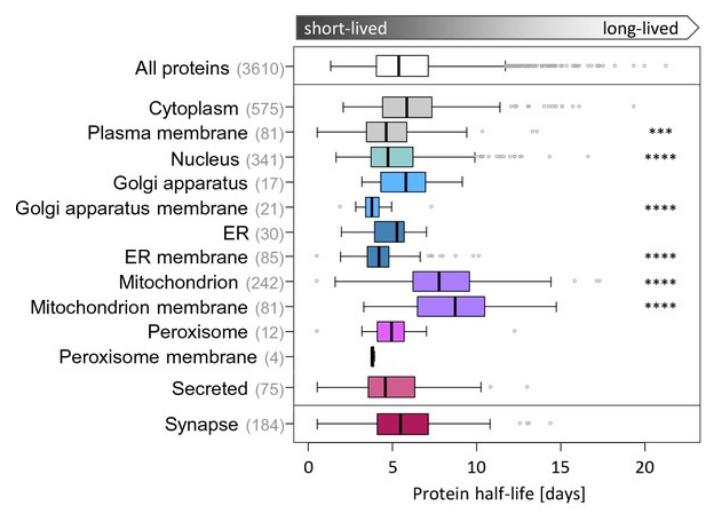 Variety of half-lives for proteins in the brain.

New findings provide insight on how the components of different cells in the brain are altered, which could affect our abilities to learn and form memories.

Scientists have revealed that protein molecules in the brain are broken down and replaced at different rates, depending on where in the brain they are.

The study, published in eLife, provides essential insights into how the components of different cells in the brain are altered. These kinds of alterations may be important in our abilities to learn and form memories, especially as protein turnover plays a crucial role in these processes.

Proteins are the mechanical engines of the cell, carrying out many essential functions. The ‘turnover’ of proteins in a cell is balanced by how much protein is manufactured and how much is broken down. Under normal conditions, this turnover is continuous, and ensures that damaged proteins can be removed and replaced by new ones. It also gives a cell the ability to change its entire proteome – all the proteins it contains – to respond quickly to internal and external signals, such as hormones or electrical impulses.

Protein turnover ensures that synapses – the structures that allow an electrical or chemical impulse from one nerve cell to another – remain flexible. This phenomenon, called ‘synaptic plasticity’, is important for maintaining the brain’s ability to create new nerve networks, which in turn allows us to create new memories or learn new behaviours and skills.

To address this, the team grew cells from the hippocampus region of the brain and used isotopically labelled amino acids (the building blocks of proteins) to determine the ‘half-life’ of proteins. This was measured by how quickly the ‘heavy’-labelled proteins appeared in the cells as the proteins were made, and how quickly the natural ‘light’ proteins disappeared as they were broken down. The team obtained half-life measurements for over 5,100 protein groups from different neuronal culture types that contained a mixture of neurons and glia cells (which support and provide insulation between neurons). All samples contained both neurons and glia cells, but in different proportions.

They found the half-lives varied greatly – from less than a day (fast turnover) to more than 20 days (slow turnover) – and that this depended on the location of the protein in the cell. Proteins nearer the surface of the cell, often involved in communication, were shorter-lived and proteins involved in energy metabolism were longer-lived compared to the overall protein population.

Of particular note, the researchers found that an identical protein expressed in glia cells had a much faster turnover rate than when it was expressed in neuron cells. A subset of proteins also had faster or slower turnover rates when there were more glial cells in the environment.

“Our results demonstrate that both the cell-type of origin as well as the nature of the environment outside the cell have powerful influences on protein turnover,” concludes senior author Professor Erin Schuman, Director of the Max Planck Institute for Brain Research. “Our next goal is to determine how nerve plasticity regulates and exploits turnover to modify the brain proteomes in response to different stimuli.”
(press release by eLife)