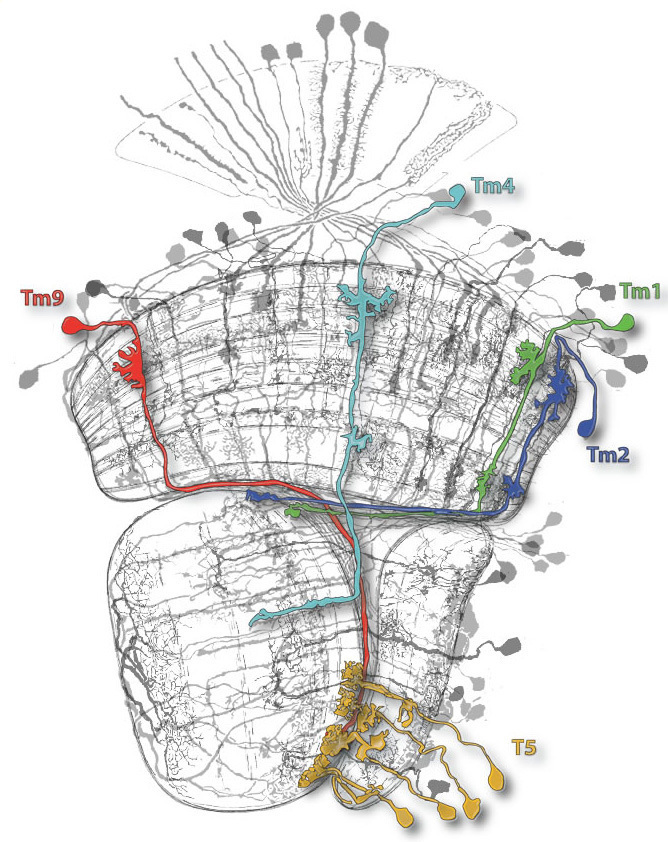 Clarity in the cellular thicket. Four classes of nerve cell (Tm9, 4, 1 and 2) are instrumental in calculating directionally selective signals in T5 neurons (yellow). © MPI of Neurobiology

The ability to see the direction in which something is moving is vital for survival. Only in this way is it possible to avoid predators, capture prey or, as humans in a modern world, cross a road safely. However, the direction of motion is not explicitly represented at the level of the photoreceptors but rather must be calculated by subsequent layers of nerve cells. Scientists from the Max Planck Institute of Neurobiology in Martinsried have now discovered that, in fruit flies, four classes of nerve cell are involved in calculating directionally selective signals. This is strikingly different from mathematical models of motion detection discussed in the literature so far.

When crossing a road, it’s advantageous to know the direction in which nearby cars are moving. However, the individual light sensitive cells in the eye only signal local changes in brightness, whether an image point becomes brighter or darker. The direction of motion is detected in a downstream neuronal network.

Alexander Borst and his team at the Max Planck Institute of Neurobiology have unravelled cell by cell how the brain calculates motion from light changes. Their model is the fruit fly, a master in motion vision, possessing a relatively small brain. Although there are more than 50,000 nerve cells in the area of the fruit fly brain responsible for motion vision, the researchers believe that the network is “simple” enough to allow them to understand the circuitry at the cellular level. In previous studies, they have shown that in flies, similar to vertebrates, motion is detected in two parallel pathways, one for moving bright edges (ON-pathway) and one for moving dark edges (OFF-pathway).

The scientists have now succeeded in identifying the first nerve cells in the fruit flies’ OFF-pathway, known as T5 cells, which perceive the direction of motion. These cells receive input from four upstream cells, called Tm cells. A whole series of experiments based on two-photon microscopy, electrophysiology and behavioural analyses have shown that Tm cells are activated specifically by “light OFF” brightness changes. In contrast, T5 cells are only activated by motion of OFF-edges in a specific direction. The signals of all four Tm cells are required for a directionally selective signal to arise in a T5 cell. “That was a surprising finding, because mathematical models for motion detection only involved two input cells,” reports Etienne Serbe, one of the two lead authors of the study. “Another exciting finding is that the visual system of vertebrates deviates from these models in a similar way,” says Matthias Meier, the other lead author.

Alexander Borst and a colleague have recently demonstrated the many common features in the visual circuits of flies and mice (review article in Nature Neuroscience). “This recently discovered commonality also shows that we can gain fundamental insights into the circuitry of the brain from investigations of the fly”, says Alexander Borst. “I’m already curious about what we will discover next in the motion circuit.”