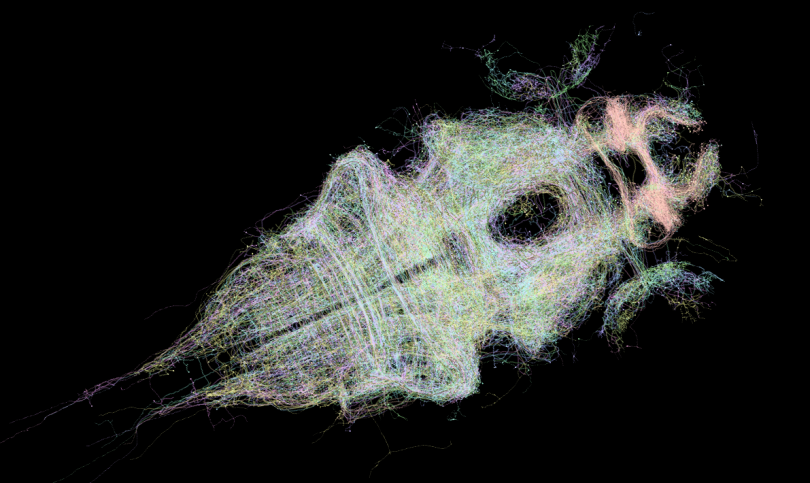 Neurobiologists publish the first interactive nerve cell atlas for the brain of zebrafish. They want to understand how distinct brain areas coordinate their activity to control behavior. (c) MPI of Neurobiology / Kunst

If zebrafish larvae used the internet, they might soon be able to download a map of their entire brain. “We’re not at that point yet”, explains Michael Kunst from the Max Planck Institute of Neurobiology. “Nevertheless, our first atlas detailing over 2,000 neurons is now available online.” As such, a reference work was created in which function can be seamlessly mapped onto structure of the vertebrate brain. This resource is now inviting scientists around the world to browse anatomical data and contribute their own.

“We want to understand how even distant areas of the brain coordinate their activity to control behavior”, says Michael Kunst, summarizing one of Herwig Baier’s departmental goals. “To do this, however, we need to know how the brain is wired at the individual cell level.” The position, shape and connections of a cell are inextricably linked to its function. It is individual, interconnected cells that, for example, bring together sensory information or generate behavior.

Michael Kunst and his colleagues used a genetic trick to randomly label individual neurons among the 100,000 nerve cells in the brain of zebrafish larvae. The labeled cells were made brightly fluorescent and imaged under the microscope.

“We then captured and digitized the shape and exact location of the labeled cells, partially by hand”, says Eva Laurell, who took most of the images and traced the cellular processes. Gradually, the information from hundreds of zebrafish larvae were combined and used to generate a nerve cell atlas: a “standard brain” with over 2,000 neurons from 72 brain regions.

In the tiny, almost transparent zebrafish larvae, scientists can potentially monitor the activity of all 100,000 neurons under the microscope. That is possible even while the animals’ brain processes sensory information and generates behavior. Other species are not suitable for such studies because their brains are too large or impenetrable to light.

“Our zebrafish atlas shows us neural pathways interconnecting the areas of the brain”, says Kunst. One of the goals of the atlas is to relate observed brain activity with, for example, the behavior of individual cells. This has already been proven to work, as shown in the first studies to use it, such as by Anna Kramer from the group of Fumi Kubo.

The scientists now hope that they will be able to expand the atlas to almost all neurons of zebrafish larvae over the next few years. “We deliberately designed the atlas in such a way that other labs can also easily integrate their reconstructed neurons”, explains Michael Kunst. One next step will be to combine the new cell atlas with information on cell-to-cell connections, the synapses. This will be possible by using the serial block-face scanning electron microscope. The scientists in Herwig Baier’s department hope that in just a few years a “functionally mapped connectome” will be created in this manner. With such a complete neuronal map, scientists will not only be able to understand information processing in the brain, but also accurately predict the effects of disorders, which lead to miswiring of the nervous system.