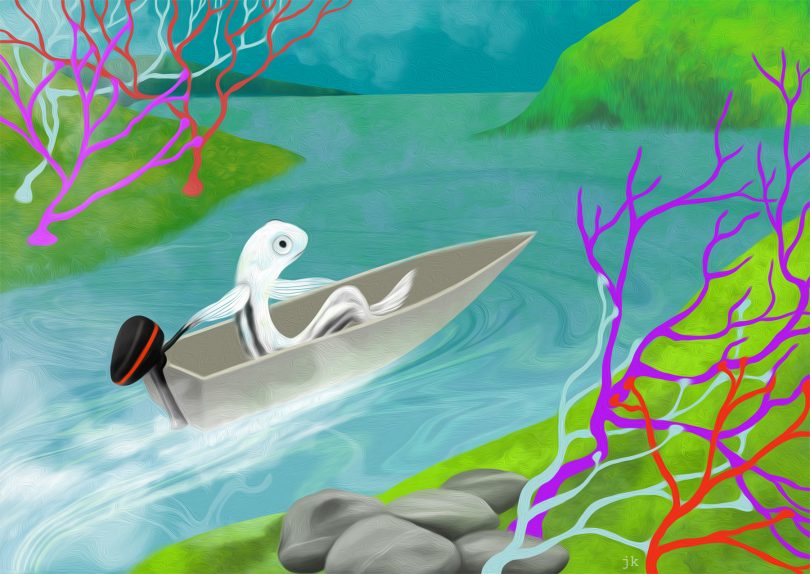 When an image of the environment moves past zebrafish eyes, they react by swimming in the same direction. Neurobiologists in Herwig Baier’s Department have shown which neuronal pathways coordinate this behavior. (c) MPI of Neurobiology / Kuhl

Neurobiologists show how movement information flows through the fish brain

We see with our brains. How do nerve cells calculate what is being seen, based on the information provided by our eyes? Scientists at the Max Planck Institute of Neurobiology have peeked into the brains of young zebrafish and tracked the flow of information through the brain at the scale of individual neurons. The study shows that neurons in the eye prefilter movements in the fish’s environment; this visual information from both eyes is then compiled by the brain’s pretectum, which passes it on to the brain’s movement centers. This pathway, eye-pretectum-hindbrain, also exists in other vertebrate brains, and probably with similar connectivity.

The photoreceptors of the retina convert light into neuro-electrical signals, while downstream cells in the eye piece these signals together to detect local movement. However, broad patterns of movement across the field of vision (called “optic flow”) are first assembled deep in the brain. How neurons assemble meaningful images from individual dots of light and then drive appropriate behavior is an area of intense research. “In the zebrafish brain, we now understand the steps through which cells process information on optic flow,” explains Anna Kramer, who has achieved precisely this with the help of state-of-the-art methods.

“We observed the activity of many genetically pre-labeled neurons and then picked the cells that responded to optic flow. We then targeted a laser beam on these cells to visualize all their fine branches,” Kramer explains one of the methods used. “The shapes of these cells and their arrangement give us a detailed picture of brain circuitry.” Kramer and her colleagues from the department of Herwig Baier then compared their data with cell reconstructions from the “zebrafish brain atlas” developed in parallel in the department. In combination, the work revealed how information flows from the sensory organ, the eye, to the motor centers of the hindbrain.

The investigated behavior is known as the “optomotor response”. Using this innate behavior, zebrafish can hold their position in a current: An animal that drifts backwards, e.g., when it is carried downstream in a flowing river, perceives an image of the environment that appears to move forward, past both of its eyes. As a result of such optic flow, the fish will swim reflexively forward to maintain its position. In the lab, the scientists simulated this for the zebrafish larvae by sweeping striped patterns past them and then used high-resolution optical imaging techniques to record neuronal activity in their brains.

The neurobiologists were able to show that direction-selective neurons in the retina project to a very specific area of the pretectum. The pretectum is part of a region in the zebrafish brain where the visual information from the two eyes is compiled and behavioral responses are prepared. “We have shown how this neural circuit detects optic flow in the pretectum and how direction-selective cells gradually convert optic flow signals into motion commands,” Kramer concludes.

The study by the Martinsried neurobiologists confirms the hypothesis that visual information is sent through parallel pathways into the brain, where they then trigger specific behavioral responses. “In the zebrafish brain, we can now track these actions from cell to cell, and from this we are able to draw conclusions about optic flow processing by other vertebrates,” said Fumi Kubo, leader of the study, now professor at the National Institute of Genetics in Mishima, Japan.