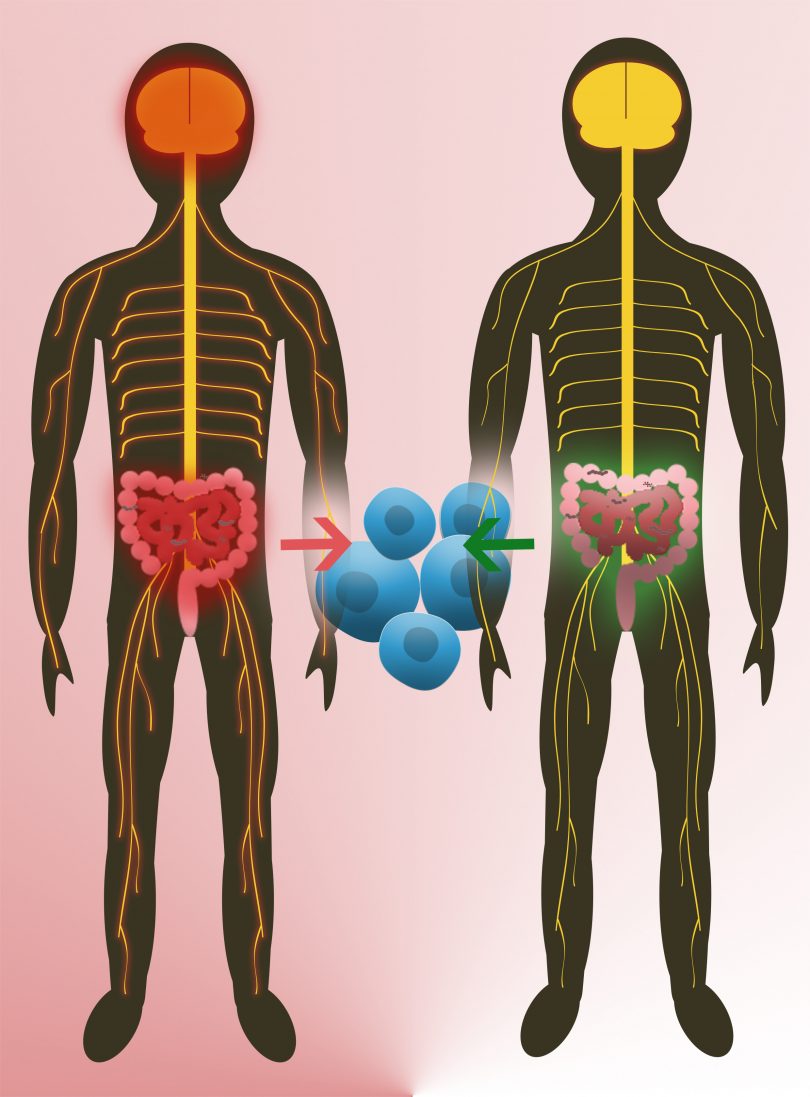 Multiple sclerosis (MS) is the most common inflammatory disease of the central nervous system. It has been suspected for some time that bacteria in the natural intestinal flora may be responsible for triggering the disease in individuals genetically predisposed to it. Together with researchers from the Ludwig Maximilian University of Munich, the Max Planck Institute of Immunobiology and Epigenetics in Freiburg and the Universities of California (San Francisco) and Münster, Hartmut Wekerle and Gurumoorthy Krishnamoorthy from the Max Planck Institutes of Neurobiology and of Biochemistry in Martinsried have, for the first time, shown that intestinal flora from patients with MS can trigger an MS-like illness in an animal model.

In autoimmune diseases such as multiple sclerosis, errant immune cells attack the body’s own cells in the brain and spinal cord. Attacks triggered by autoimmune T-cells damage the nerve cells and result in the destruction of the sheath that surrounds these cells. The cells die off, with the result that nerve impulses are no longer transmitted correctly.

Every person has T-cells with the potential to attack their own cells; however, these cells usually remain permanently dormant. In some people, however, the pathogenic potential of these cells is activated, resulting in MS. Scientists believe that activation is caused by a combination of genetic and environmental factors. “More than 200 genes that increase susceptibility to MS have now been identified,” explains Hartmut Wekerle, Hertie Professor and Emeritus Director at the Max Planck Institute of Neurobiology, “but for MS to develop, there must be a trigger. To date, most research on triggers has looked at infectious diseases.” A few years ago, the neuroimmunologist, together with his colleagues Kerstin Berer and Gurumoorthy Krishnamoorthy who now leads a Research Group at the MPI of Biochemistry, determined that this trigger is likely to be found in the natural intestinal flora. Together with other colleagues, the researchers showed that intestinal microorganisms were able to activate T-cells in genetically modified autoimmune mice, causing the mice to develop brain lesions similar to those found in MS.

Since it was shown that intestinal bacteria can trigger MS in animal experiments, there have been numerous studies looking at and comparing the composition of the intestinal flora in healthy people and people with MS. “However, the genetic diversity of these people and their intestinal flora makes it very difficult to draw any concrete conclusions from these results,” explains Wekerle. “In addition, the mere presence of a particular microorganism in people with MS tells you nothing about whether it actually plays a role in the development of the disease. To determine that, you need to carry out animal research.” The scientists have got around this difficulty by undertaking a large collaborative project that interweaves clinical studies and basic research.

The basic idea behind the collaborative project was to compare the intestinal flora from identical twins. In those rare cases where an individual with MS has an identical twin, the other twin does not usually have MS. This suggests that developing MS is not solely dependent on genetic factors. As part of this collaborative project, Lisa Ann Gerdes, Reinhard Hohlfeld and their colleagues at the Ludwig Maximilian University Institute for Clinical Neuroimmunology in Munich recruited a unique cohort of more than 50 pairs of identical twins from all over Germany. In each case, one twin had MS and the other did not. Because each pair of twins is identical and the effects of genetics on the intestinal flora can therefore be ignored, this should permit the identification of any differences in intestinal flora relevant to the development of MS.

Comparing the intestinal flora between the twins showed up some interesting, if subtle, differences. “Where things got really interesting, however, is when we inoculated the genetically modified mice, which had been raised in sterile conditions, with the human microbiota,” explains Guru Krishnamoorthy. Almost all of the mice which received intestinal flora samples from twins with MS developed MS-like brain lesions. The study confirms, for the first time, that gut flora components from patients with MS play an active role in T-cell activation and could therefore be involved in triggering MS in humans. “The objective now is to narrow down the range of candidate microorganisms and then study them,” says Hartmut Wekerle. Wekerle is quick to note, however, that these studies are likely to take years, and that it remains far from clear whether this will lead to any new diagnostic procedures or treatments, or what form they might take. Regarding the idea recently touted in the media that faecal transplants from healthy individuals to those with MS could offer rapid relief from the disease, the scientist is dismissive, “You never know exactly what’s in them!”