This is a graphical illustration of the iTango system. DRD2-V2 tail (C-terminus of V2 vasopression receptor)-CIBN-AsLOV2-tTA functions as a main platform. Two more modules cooperate together to cleave TEVseq by reacting to either light or ligand. DRD2 activation by an agonist will lead to beta-Arrestin2-TEV-N fusion protein translocate and bind to V2 tail. The other TEV-C will be recruited by blue light via CRY2PHRCIBN binding. When all iTango modules combine, released tTA will translocate to the nucleus to cause gene expression.

When we think of neuronal communication, we often picture a single neuron releasing molecular neurotransmitters into a junction called a synapse where they stimulate another neuron. But sometimes, instead of crossing a synapse, neurotransmitters flow widely throughout the brain – flooding different types of receptors and stimulating many other neurons at a time. In this scenario, they are known as neuromodulators. Identifying and manipulating specific neurons impacted by neuromodulation has been a challenge for researchers. Hyungbae Kwon’s lab at Max Planck Florida Institute for Neuroscience (MPFI), and collaborators from University of Geneva, Korea University and Max Planck Institute of Neurobiology, have recently developed a technique with a newly designed gene expression system that allows researchers to visualize and manipulate neuromodulation in real time.

The Inducible Tango technique, called iTango, builds upon the Tango system, a technique developed nearly a decade ago. With the Tango technique, individual neurons that had been stimulated by neuromodulators would express a green fluorescent protein, so researchers could identify them. However, once sensor proteins are overexpressed, it continuously produces fluorescence regardless of neuromodulators, meaning that over time as more and more neurons would fluoresce and researchers wouldn’t be able to tell which populations of neurons were stimulated. Because of this limitation, the Tango technique was not practical for studying neuromodulatory states in mammals.

iTango uses a light-sensitive labeling system. Cells will only fluoresce if the particular neuromodulator is present and the researchers are simultaneously shining a special blue light on the neurons of interest. Once the researchers turn the light off, the protein stops glowing. The Kwon Lab’s reengineering of the original Tango system with a “light switch” gives researchers control over the timing of the fluorescence so that the signal to noise ratio is increased over ten-fold, making it much easier for scientists to identify specific populations of neurons in model species such as mice. The work led by Drs. Dongmin Lee, Meaghan Creed and Kanghoon Jung was published in Nature Methods in April 2017.

In this study, Hyungbae Kwon’s team used iTango to identify specific neurons in a mouse’s brain that were activated by neuromodulatory dopamine during specific animal behaviors. They were able to identify two populations of neurons – one involved in the increased locomotion and one involved in the reward feeling. His team took the research a step further – expressing ion channels sensitive to light, they were able to selectively inhibit or induce behaviors associated with the neuronal populations they had previously identified. Furthermore, they were able to control cocaine-responsive behavior by using the iTango technique.

Dr. Kwon explains that while his laboratory is primarily interested in basic neuroscience and the ways in which neuromodulators impact neuronal circuits and their formation, he anticipates that the iTango method will be applied to drug development, targeted cancer therapy, and many other research areas. One of the molecules that comprises the iTango system is a G-protein sensor that could be replaced by any G-protein. G-proteins are common targets for pharmacological drugs so companies could use this technique to screen potential drug candidates with incredible specificity. Sometimes viable drug candidates get thrown out because the signal-to-noise ratio in the existing screening method is very low. Because the light-sensitivity of the label increases the signal-to-noise ratio over ten times, the iTango technique has the potential to clearly identify these overlooked candidates without requiring any additional time investment.

“The most important part of this story is that we made this technique light sensitive. The light sensitivity provides a huge advantage because you can apply it to basically any signaling,” said Dr. Kwon. “iTango will be useful for visualizing and manipulating the neuronal circuitry that underlies drug-induced behaviors and psychiatric diseases related to neuromodulation, such as mood disorders or schizophrenia.” 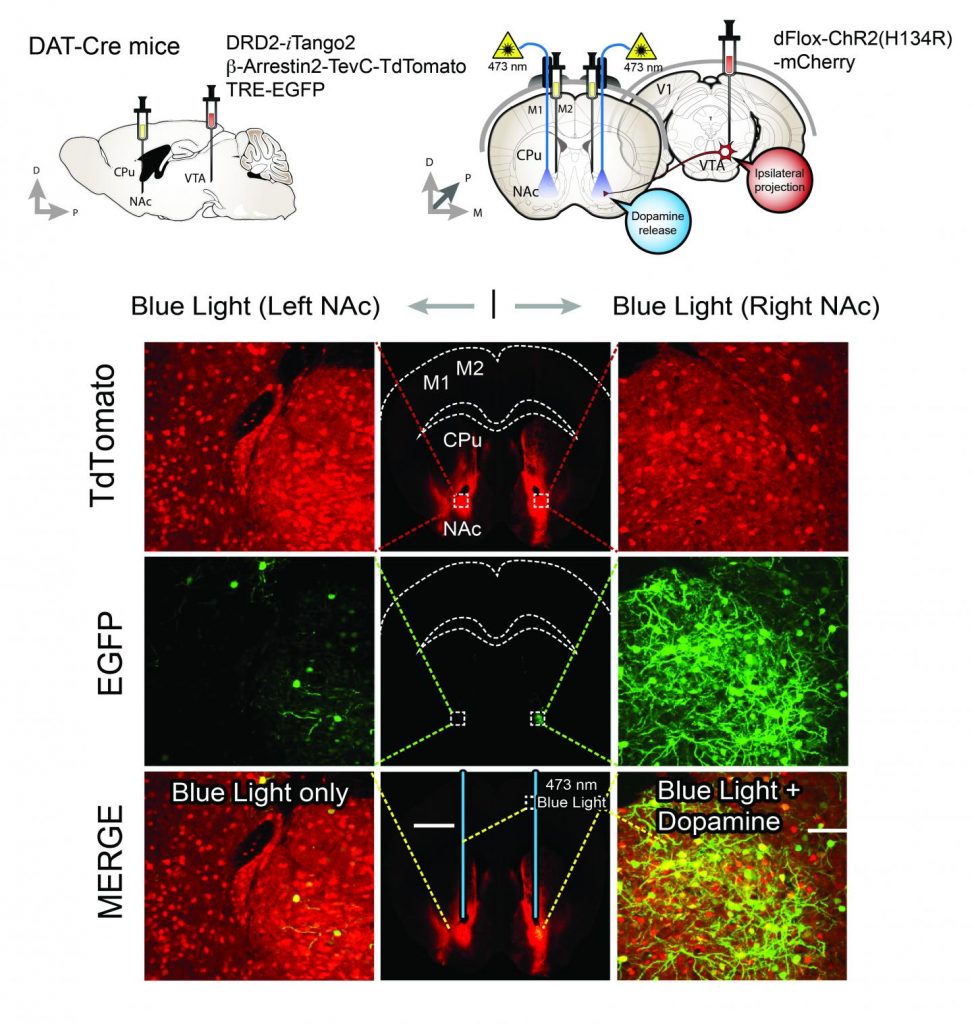 (TOP) Schematic figure of virus injection. A mixture of DRD2-iTango2 viruses including EGFP reporter were injected into left and right NAc areas in DAT-Cre mouse. At the same mouse, AAV-dFlox-ChR2(H134R)- mCherry was injected to the right side of VTA area to control DA release selectively. Coronal section view of virus injection and fiber optic implantation. Both NAs were injected by iTango2 viruses and an optic fiber was implanted in both hemispheres. (BOTTOM) Representative confocal images of DRD2-iTango2 expression by blue light (10 s ON and 50 s OFF, one hour). Red, green, and merged channel images were presented at upper, middle, and bottom row, respectively. Note that TdTomato expression is robust in both NAs but EGFP signals are very high only in the right NAc. High magnification images of left and right NAc were presented for further clarification.