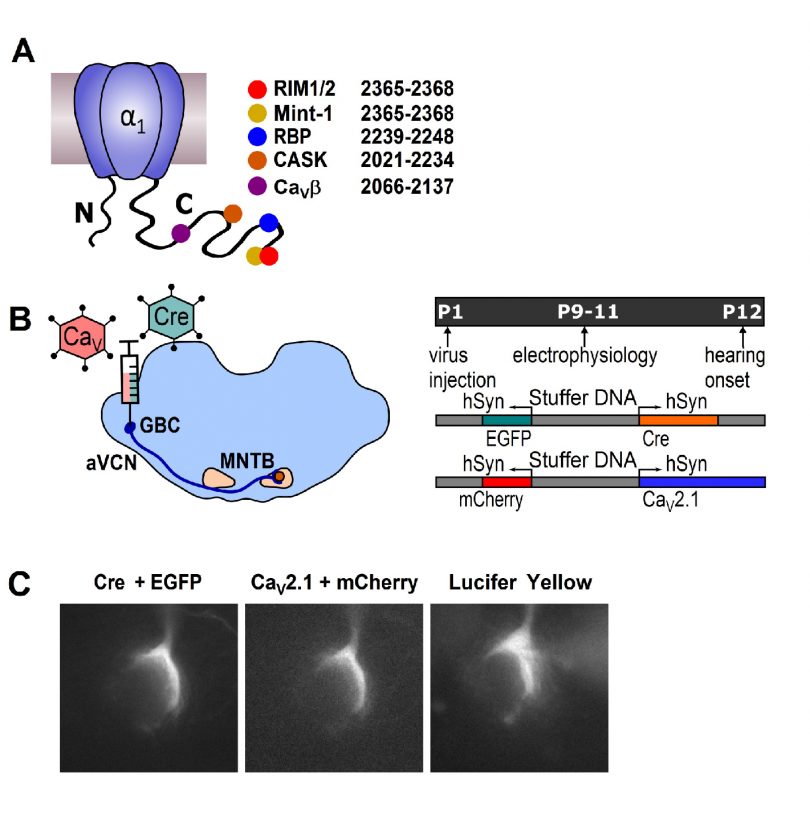 CaV2.1 can be selectively ablated and functionally rescued at the calyx of Held. A, Cartoon depicting CaV2.1 α1 subunit distal C-terminal interaction partners. B, left: Schematic view of stereotactic surgery to inject/coinject HdAd vectors expressing Cre + eGFP and CaV2.1 constructs + mCherry into the aVCN at age P1. Right: top: Experimental timeline from virus injection at P1 to electrophysiological recordings at P9-P11 prior to the onset of hearing (P12). Middle and bottom: schematic view of the viral constructs used, expressing either Cre + eGFP or CaV2.1 constructs + mCherry, respectively, driven by individual promotors. C, Calyx of Held terminals transduced with Cre + eGFP (top) and CaV2.1 + mCherry (middle). eGFP and mCherry signals overlap with those of a calyx of Held loaded with Lucifer Yellow via a patch pipette (bottom).

Approximately eight years ago, former Research Group Leader at Max Planck Florida Institute for Neuroscience (MPFI) and current associate professor at the University of Iowa, Samuel Young Jr., Ph.D. set out to understand voltage-gated calcium (Ca2+) channel function, which determines the characteristics of neurotransmitter release and ultimately how the brain operates. To do so, Young and his team had to painstakingly develop new research methods to overcome severe technical challenges which were major roadblocks in the field. In a study published in the journal eLife on August 8, 2017, Matthias Lübbert, Ph.D. and R. Oliver Goral, Ph.D., post-doctoral researchers, and others in the Young Lab, describe how they manipulated voltage-gated Ca2+ channels and directly monitor their impact on Ca2+signals in a presynaptic terminal for the first time, to test how they influence cellular communication.

Neurons communicate with each other through electrical and chemical signals. An electrical signal called an action potential travels down the neuron to the synapse, a highly specialized structure at a point of contact between neurons, where information is transferred over a small space via chemical messengers. This causes voltage-gated Ca2+ channels – protein complex that form a pore in the cell membrane – to open, allowing Ca2+ to flow into the presynaptic compartment, the portion of the neuron that releases chemical messengers which impact neighboring cells. The influx of Ca2+ causes synaptic vesicles – packages of neurotransmitters – to merge with its membrane at specialized sites called active zones and release their contents. The neurotransmitters then travel across the gap and activate receptors on the second cell, influencing that cell’s behavior.

C-terminal deletions in CaV2.1 do not affect CaV2 abundance at the presynaptic terminal.
Cartoons depicting CaV2.1 full transcript or mutants (top) with corresponding exemplary Ca2+ currents (bottom) triggered by 10ms voltage steps from ‑70 mV to -40 mV in 10 mV steps and further to +60 mV in 5 mV steps.

Scientists have identified certain proteins and sequences that they believed were responsible for direct interaction with the alpha subunit to control the number and organization of the channels in the presynaptic terminal. However, without the technology to make molecular perturbations and directly manipulate the alpha subunit, the studies that identified them relied on indirect observations.

Young and his team overcame these limitations. They modified Helper Dependent Adenoviral vectors (HdAd,) which are able to carry far more foreign DNA than commonly used viral vectors in the neuroscience field. These vectors express modified alpha subunit proteins while at the same time remove the endogenous alpha subunit of voltage-gated Ca2+channels. By using these vectors in a mouse model, the team was able to disrupt the function of specific voltage-gated channels at specific times, without disrupting the endogenous alpha subunit expression in other areas, with unprecedented precision. The team focused on the Calyx of Held – a particularly large presynaptic terminal, which is a model system for understanding presynaptic function. Its size gives unparalleled experimental accessibility to record presynaptic activity compared to other presynaptic terminals in neurons. Using their cutting edge HdAd vectors in conjunction with their transgenic animals, and focusing on the Calyx of Held, they generated a platform to carry out a study which could simultaneously probe both the structure and function of these channels with unrivaled accuracy.

The new study overturned the popular theory which proposed crucial roles of certain proteins and binding motifs on the alpha subunit of voltage-gated Ca2+ channels for the regulation of abundance and neurotransmitter release. Moreover, it identified a completely different region of the alpha subunit which impacts positioning of the channels relative to synaptic vesicles but not the abundance, suggesting that the two characteristics are actually determined separately.

The results of the study will be of tremendous importance to understanding how neurons encode a broad diversity of information as well as causes, and possible treatments of Ca2+ channelopathies. “It’s exciting,” said Young, “our research has overturned current paradigms and possibly opened up a new way we think about the molecular mechanisms that control neurotransmitter release.” 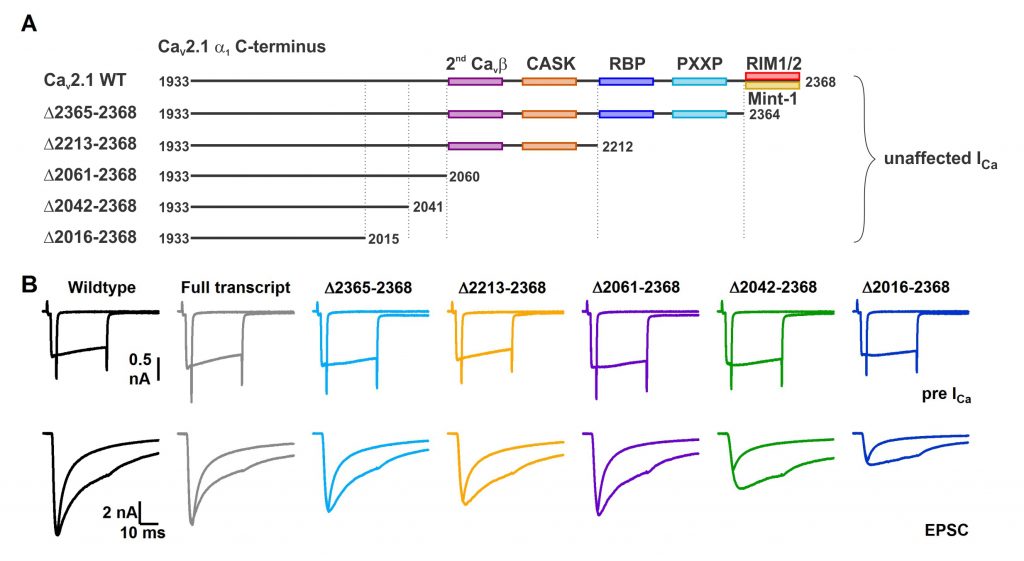 This work was supported by research grants from the National Institute of Deafness and Communication Disorders (R01 DC014093), Max Planck Florida Institute for Neuroscience and the Max Planck Society. The content of this article is solely the responsibility of the authors and does not necessarily represent the official views of the funding agencies.