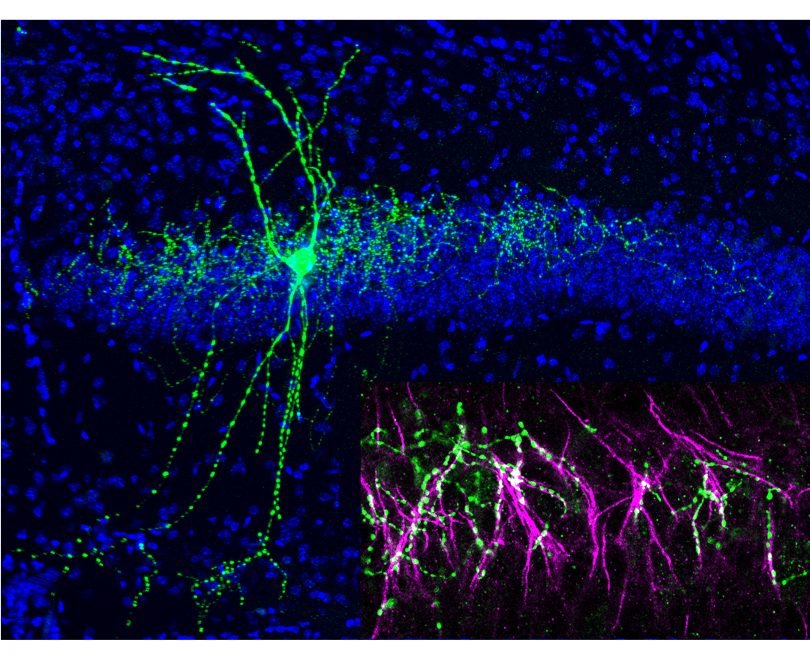 Researchers at the Max Planck Florida Institute for Neuroscience show that location matters when it comes to brain cells’ gene expression, connections, and innervation area

The brain is composed of distinct regions that differ in their functional roles and cellular architecture. For example, the hippocampus is an area well-known for its involvement in memory and its dysfunction in diseases such as Alzheimer’s, while the neocortex is involved in functions such as perception, consciousness, and language. The hippocampus has a single, curved cell layer, while the neocortex has six, stacked layers. At the cellular level, although they share canonical types of inhibitory interneurons (INs) and excitatory principal neurons (PNs), it remains largely unknown to what extent a single type in different brain regions displays similarity in gene expression, axonal shape, connectivity, and developmental origins.

To approach this problem, researchers in the laboratory of Hiroki Taniguchi, Ph.D., Research Group Leader at the Max Planck Florida Institute for Neuroscience (MPFI), took advantage of a unique class of INs called chandelier cells. As their name suggests, these neurons have a distinctive, chandelier-like shape. Most importantly, when their axonal processes stretch out and connect to neighboring cells, they almost always do so at the same location on that neuron – the axon initial segment – and nowhere else. These powerful inhibitory connections control the output of hundreds of neighboring excitatory PNs. These stereotypical features and the fact that chandelier cells are present in both the hippocampus and the neocortex make them an ideal model to study regional differences in a single canonical neuronal type.

To visualize different cell types in the brain, researchers often need genetic access to that cell – the ability to express a gene of interest only in, say, chandelier cells, but not neighboring neurons. Years ago, Taniguchi developed a method for studying chandelier cells in the neocortex, but access to those in the hippocampus has remained elusive. Two postdoctoral researchers in Taniguchi’s lab, Yugo Ishino, Ph.D. and Michael Yetman, Ph.D., followed in his footsteps, painstakingly screening molecules until they found one that was reliably expressed in hippocampal chandelier cells – cadherin 6. Luckily, a mouse model already existed that allowed the team to take advantage of this gene expression and use it to compare the two cell populations.

Now with the ability to compare these two populations, the team found that chandelier cells in the hippocampus expand twice the size of axonal arbors in the neocortex and made twice as many connections as their counterparts. Additionally, the hippocampal chandelier cells were born several days earlier during embryonic development than the neocortical ones. Lastly, the team identified a gene, calretinin, in the hippocampal cells which was not expressed in the neocortical cells – suggesting the possibility that these cells exhibit different functional properties as well.

The scientists wondered what factors determined regional differences in these cells’ characteristics. Were the traits predetermined by genes that were set at the start of the cell’s life? Or did the environment in which they ‘grew up’ have a stronger influence?

To answer this question of nature versus nurture, the researchers took cells that would grow to become chandelier cells in the hippocampus and transplanted them into the neocortex, and took cells that would grow to become neocortical chandelier cells and transplanted them to the hippocampus. Each ended up taking on the characteristics of its new neighbors, implying that the environment that they grew up in strongly influenced the fate of these cells.

These results, Taniguchi explained, show that exquisite modifications of canonical neuronal types in different brain regions may contribute to their functional diversification. Future studies should elucidate the molecular and cellular mechanisms by which regional environment controls phenotypic variations of neuronal types.

With the novel genetic access to hippocampal chandelier cells developed in the Taniguchi Lab at MPFI, neuroscientists can begin asking questions about the function of these cells within learning and memory circuits. The ability to manipulate specific genes within these hippocampal chandelier cells may allow for more meticulous studies of several diseases, including epilepsy and schizophrenia, in which these neurons have been implicated.