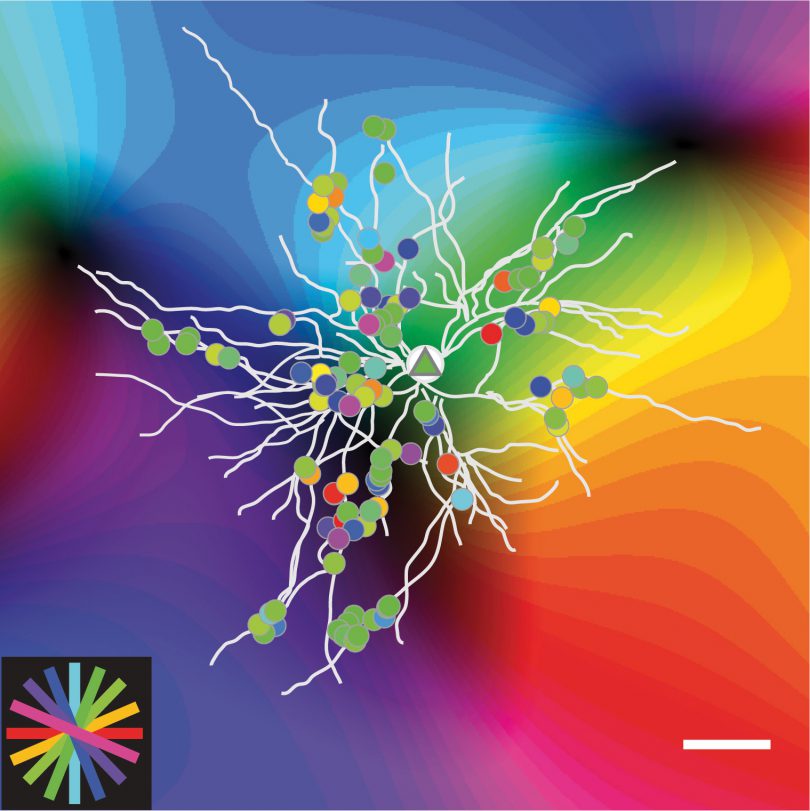 – Dendrites are the tree-like extensions from neurons that serve as the main location for synapses—the junctions that neurons use to communicate with each other. In the cerebral cortex, dendrites are covered with thousands of small protrusions called spines and each dendritic spine is the site of a different synaptic input.
– The classical view of dendritic function is that information arriving via the dendritic spines is passively conveyed to the cell body through the dendrites, much like a cable, without changing the information content.
– Although it has been suggested that dendrites could play a more active role in this process, support for such a role in the functioning brain has been difficult to obtain.
– Now scientists at the Max Planck Florida Institute for Neuroscience (MPFI) have provided strong evidence that the arrangement of synaptic connections within the dendritic field supports an active role for dendrites in cortical processing and that these dendritic computations shape how neurons encode visual information.

Advancing our understanding of neural circuits in the cerebral cortex

The cerebral cortex is the largest and most complex area of the brain, comprising 20 billion neurons and 60 trillion synapses–a neuronal network whose proper function is critical for sensory perception, motor control, and cognition. The part of the cerebral cortex devoted to vision has played a key role in elucidating fundamental principles that are used by cortical circuits to encode information. Because edges supply a wealth of information about our visual world, neurons in visual cortex respond selectively to edge orientation, some preferring vertical edges, while others prefer horizontal, and all angles in between. Individual neurons also exhibit considerable diversity in their degree of selectivity, some responding to a narrow range of orientations, others to a broad range of orientations. These differences in selectivity are critical for accurately encoding the visual information in natural scenes, but the underlying mechanisms that account for this diversity remain unclear. In their recent publication in Nature Neuroscience, MPFI researchers Daniel Wilson, David Whitney, Ben Scholl and David Fitzpatrick describe how this diversity comes about and, in the process, provide new insights into the powerful role that dendrites play in cortical processing.

The research team addressed this issue using new microscopic imaging technologies that allowed them for the first time to assess the input/output functions of individual cortical neurons in the living brain. By using in vivo 2-photon calcium imaging, they were able to characterize the orientation tuning and spatial arrangement of synaptic inputs to the dendritic spines of individual neurons in ferret visual cortex, and compare dendritic spine and cell body responses.

The researchers found that they were able to reliably predict the orientation preference of individual neurons simply by adding up the responses of their dendritic spines. However, the responses of the dendritic spines did not account for the degree of orientation selectivity exhibited by individual neurons. In looking for factors that could account for differences in selectivity, they noticed that spines with similar orientation preference were often spatially clustered along the dendrite and that neurons that had a greater number of these clusters exhibited greater selectivity. They also discovered that this functional clustering was correlated with localized dendritic events that are likely to enhance the inputs from the clustered spines.

So not only did the researchers solve the riddle of orientation selectivity, they provided evidence that dendrites endow neurons with more computational power than previously thought. While this study focused specifically on information coding in visual cortex, it is likely that functional clustering of inputs within the dendritic field is a common principle influencing neuronal input/output functions throughout the cerebral cortex, significantly enhancing the brain’s information processing capabilities.

Above image:
Reconstruction of a single cell with all imaged orientation-tuned synapses overlaid onto the orientation preference map; the cell is indicated by a triangle and its synapses are indicated by circles—both are colored by their preferred orientation; scale bar 50 μm