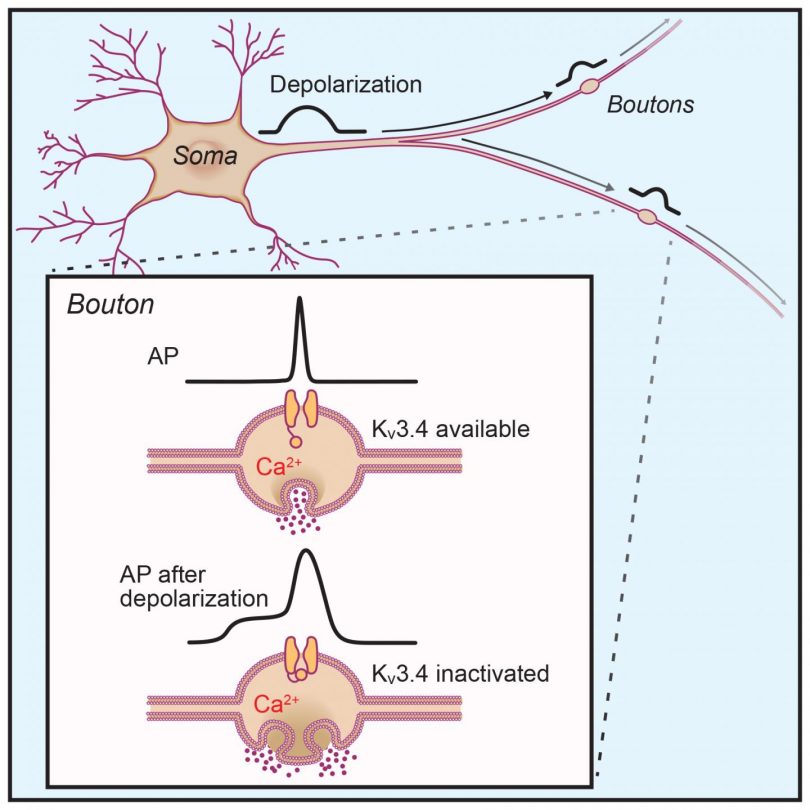 Scientists at Max Planck Florida Institute for Neuroscience are working to understand how neurons in the cerebellum, a region in the back of the brain that controls movement, interact with each other

In a study published in Cell Reports in February 2017, Matt Rowan, Ph.D., a Post-doctoral researcher in the lab of Dr. Jason Christie, sought to understand the molecular mechanisms behind a type of short-term neuronal plasticity that may have importance for motor control. The team showed that this type of plasticity can impact neurotransmission in as little as 100 milliseconds and depends upon inactivation of Kv3 channels. Interestingly, the team also found that this type of plasticity occurs more readily in juvenile brains than in mature ones.

“This has been seen before, and we’re adding a molecular mechanism showing exactly the molecule you need to get this sort of facilitation,” explained Rowan.

Researchers were already aware that this type of short-term plasticity exists, but had struggled to view it directly because the axons that utilize this type of plasticity are difficult for scientists to access. This means that some of the molecular mechanisms behind the phenomenon remain mysterious. For the current study, the team used novel techniques for voltage imaging and patch clamp recordings that allowed them to visualize and record from these tiny sections of individual neurons.

The researchers observed analog-to-digital facilitation as it occurred in experimental models. They showed that subthreshold depolarization spreads from the body of the neuron down its axon, the long extension through which action potentials travel before causing the neurons to release neurotransmitters into a synapse. Here, subthreshold depolarizations impacted neurotransmission in the juvenile models by briefly making Kv3.4 channel unavailable thereby increasing the duration of the presynaptic spike. The fact that the group observed less of this same plasticity in mature models suggests that learning and experience may temper this type of plasticity as an animal matures.

The team chose to study inhibitory interneurons in the cerebellum because they play an especially important role in the function of circuits throughout the cerebellum as well as the rest of the brain. Understanding this type of neuronal plasticity may have important implications for understanding motor disorders such as cerebellar ataxia, a disorder that can cause a variety of motor problems in humans ranging from increased falling to difficulty with speech and swallowing.