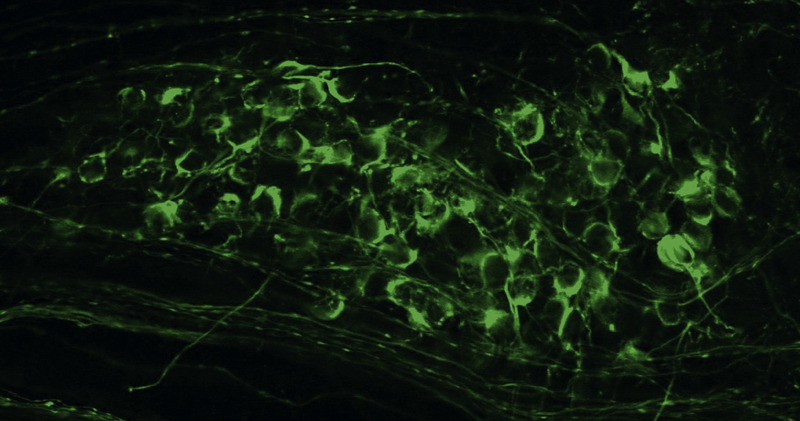 Calyx of Held synapses, greatly magnified. At this stage of development, the synapses are cup-shaped.

• The human body consists of almost 100 billion neurons that contain synapses, point-to-point contacts for information transfer. Every function, feeling and action depends on the ability of synapses within neurons to maintain continuous communication with each other.
• Synapses transmit information in the form of synaptic vesicles that contain specific chemical messengers called neurotransmitters. The continuous release of neurotransmitters is essential to maintain communication between neurons.
• To better understand and address a number of neurological disorders, we need a better understanding of how synapses can continuously relay information between neurons.
• A new study has discovered that a key factor in regulating this continual communication is the proximity of synaptic vesicles next to voltage gated calcium channels within synapses.

In their February publication in the Journal of Neuroscience, the authors of the manuscript report that a dominant factor regulating the properties of synaptic vesicle release supporting the early stages of auditory processing is the distance between the synaptic vesicles and voltage gated calcium channels within a synapse. 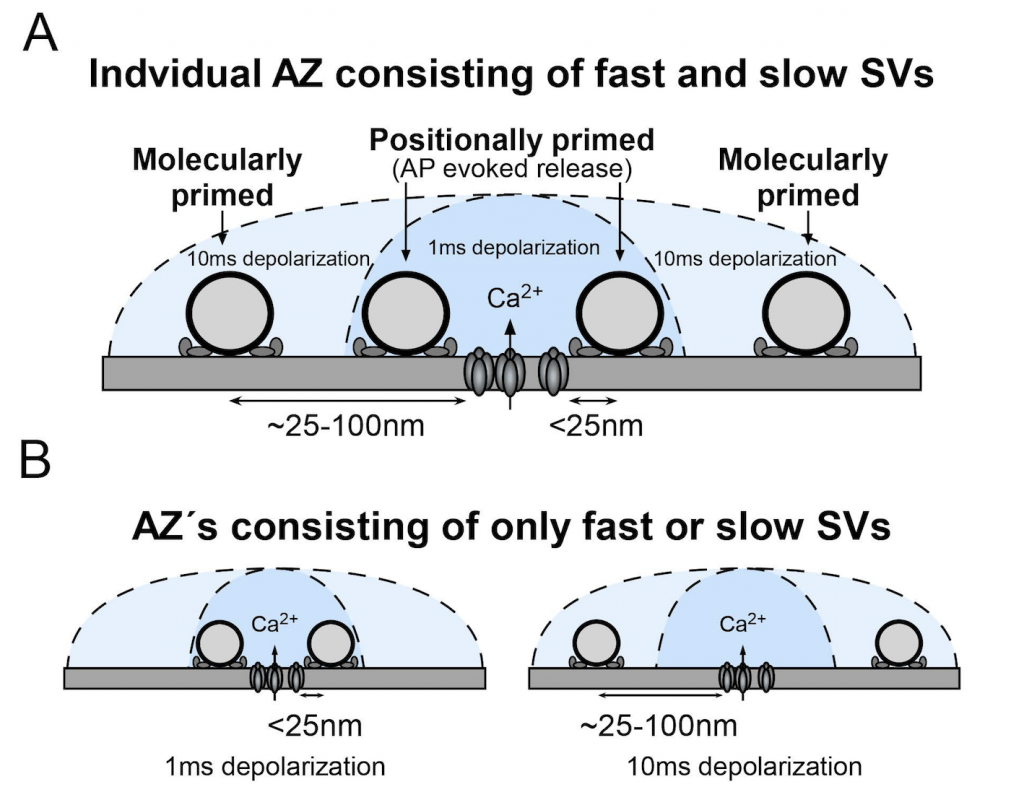 SV distribution within the P16 –P19 calyx RRP. A, B, Schematic diagram showing SVs at different priming states located at different distance to the Ca 2+ source. Only the SVs that locate close to the Ca 2+ source can be released by AP. We propose that either a single AZ contains a mixture of fast and slow SVs (A) or that there are individual AZs within the calyx that contain only fast or only slow pool SVs (B). In both cases, we propose that distal SVs are rapidly converted to fast pool SVs for AP-evoked release to maintain signaling at high firing rates.

The authors characterized the readily releasable pool of synaptic vesicles at the calyx of Held, a critical component of auditory processing, employing several different techniques that allowed them to investigate the pre-synaptic mechanisms of informational transmittal. This study identifies the critical mechanism is the regulation of Ca2+ influx through voltage gated calcium channels and release of neurotransmitters by synaptic vesicles. These findings are important for understanding the mechanisms of synaptic transmission, specifically for neuronal circuits that rely on fast, continuous synaptic transmission.

“It is becoming apparent that the underlying cause of most neuropsychiatric or neurodegenerative diseases is a dysfunction of the synapse,” explained Dr. Young. “Identifying what factors are involved in proper synaptic transmission and neural circuit function have tremendous potential as therapies for neurological disorders or brain injury.”

According to Dr. Young, the future goals of this project are to uncover molecular mechanisms that allow synapses to sustain synaptic transmission over a wide range of activity levels to allow for proper information processing by the neuronal circuit in which they are embedded.