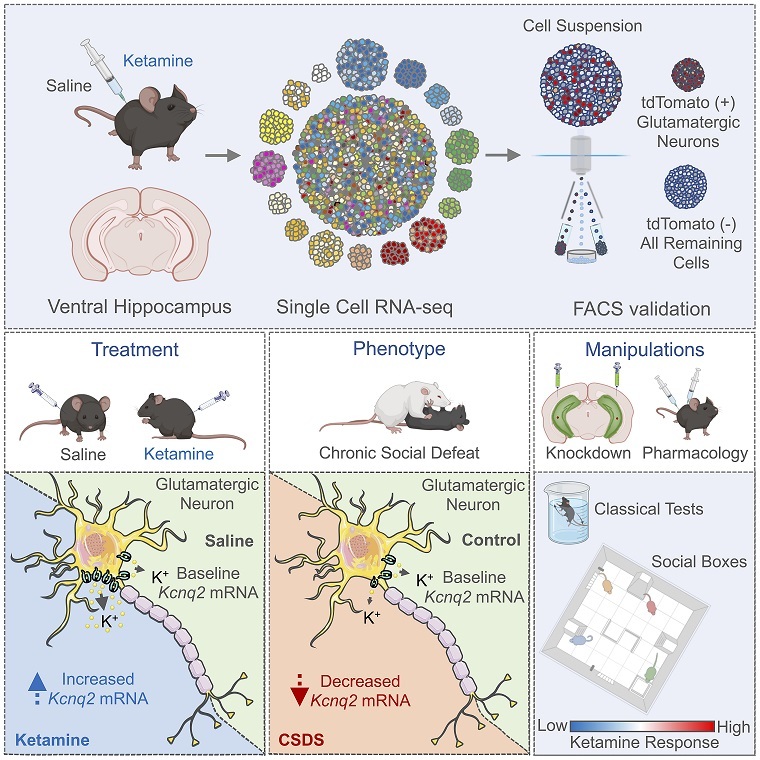 Scientists could reveal part of the mechanism of how the antidepressant ketamine works: A potassium channel changes after treatment with ketamine in a subpopulation of neurons in the hippocampus, a brain region involved in the antidepressant response. Activation of this channel increases ketamine’s antidepressant-like effects. Scientists at the Max Planck Institute of Psychiatry (MPIP) in Munich and the Weizmann Institute of Science in Israel discovered this in collaboration with researchers from the Helmholtz Zentrum, Munich, using the mouse as a model system. Regarding clinical application the results suggest new targets for future antidepressants as well as new combinations of existing drugs.

Ketamine has been used as an antidepressant in treatment-resistant patients during the past years. A single dose of ketamine produces a rapid antidepressant response within hours. In addition, the effects of ketamine last for several days after its biochemical degradation in the body. This is in contrast to “traditional” antidepressants which may take weeks to work and patients need to take daily in order to maintain the positive effects of the medication. “I would like to understand which molecular cascade of actions ketamine triggers that lead to the sustained antidepressant effects. When you understand the mechanism, you can create better drugs that can manipulate the system more specifically,” explains Juan Pablo Lopez, first author of the study.

The study, led by Alon Chen, former director of the MPIP and current president of the Weizmann Institute of Science, shows that ketamine upregulates the potassium channel Kcnq2 in a subpopulation of neurons of the hippocampus. This channel is known to maintain neuronal stability: It acts as a brake to stop the excessive stimulus-induced firing of neurons. The scientists identified the channel by using a new methodological approach, single-cell RNA-sequencing. This method was crucial as it allowed the detection of cell-type specific molecular changes. “We focused on glutamatergic neurons because they showed the largest changes and have been previously associated with the antidepressant effects of ketamine. In the past, other groups used whole tissue samples which are composed of different cell types. This is why treatment effects specific to a particular cell type were averaged out before,“ Lopez sums up.

The team of researchers also activated the potassium channel with the drug retigabine. This compound was used for the treatment of epilepsy. The activation of the channel amplified the antidepressant effects of ketamine. Furthermore, the effects of ketamine were longer lasting when administered together with retigabine. Even though the experiments were done in mice, it is likely that the results are transferable to humans as signaling pathways are conserved across species. “An advantage of our study is that we used the FDA-approved drugs ketamine and retigabine. The combination of these two drugs can now be tested in humans. The synergistic effect in mice suggests that the doses of ketamine and retigabine can be decreased in clinical applications which might reduce side effects,” concludes Chen. Understanding the mechanism of ketamine’s action, and its involved signaling pathways, is crucial for the development of new treatment options for depression.

Chen and his team validated their findings through a series of elaborate and time-consuming experiments including molecular, electrophysiological, cellular, pharmacological, behavioral and functional experiments. The results of the study were published recently in the well-renowned journal Neuron.