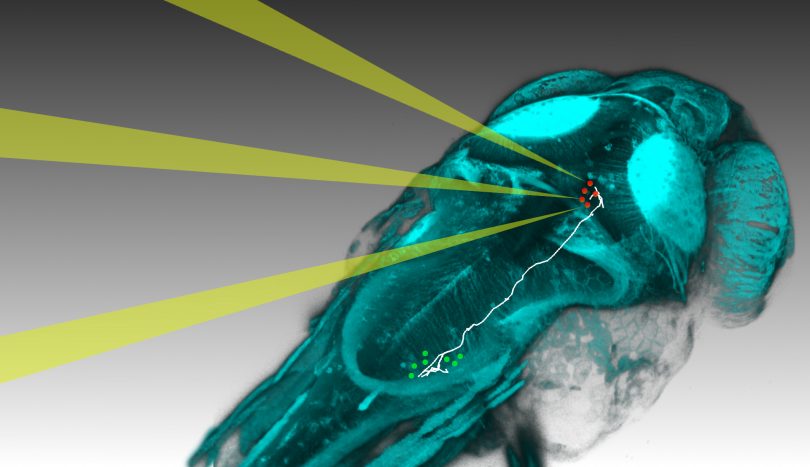 Using a new suite of methods, neurobiologists can activate individual neurons of zebrafish larvae with targeted light beams and then record how the activity spreads through the brain to initiate behavior. © MPI of Neurobiology/ dal Maschio

Scientists from the Max Planck Institute of Neurobiology in Martinsried have developed a method that allows them to identify nerve cells involved in a specific motor command. For the first time, it is now possible to evoke behavior of a small fish by artificially activating just a handful of neurons. Understanding the core components of a neural circuit is a key step for deciphering the complex code underlying even elementary brain functions.

Recent years have seen much progress in understanding of the brain’s structure and function. Advances in microscopy and functional imaging enable researchers to monitor the activity of neuronal populations, while an animal perceives sensory stimuli or generates specific behaviors. However, these studies often cannot distinguish cause from consequence of the observed changes in activity. Using the method of optogenetics, scientists can find out which neurons are essential for the chain of events that ultimately lead to behavior, and which neurons may serve other tasks or are merely by-standers. A particular challenge for this field of research is the staggering degree of “interconnectedness” of neuronal networks. Activating even a single neuron may send ripples through a large part of the nervous system. The new study from Herwig Baier and his team at the Max Planck Institute of Neurobiology has removed both obstacles in one sweep: it is now possible to pinpoint cause and effect to the cellular components of neural circuitry while simultaneously watching how activity propagates through the entire brain network and evokes behavior.

The Martinsried scientists developed a workflow allowing the 3D photo-stimulation of multiple targeted neurons while, at the same time, imaging network activity in the brain of a zebrafish larva. “The zebrafish with its small, translucent brain is ideal for our new method,” explains Marco dal Maschio, one of the two lead authors of the publication describing the technique.

A few years ago, members of the Baier lab had identified a small neuronal population in the zebrafish brain whose activation triggered the bending of the tail. “This previous work did not allow a high-resolution recording of the induced activity patterns,” explains Joseph Donovan, the second lead author. “For this reason, we designed a new approach.”

First, the scientists used genetic engineering to generate zebrafish with a photo-switchable ion channel in their nerve cells. The brain activity of these animals could be remotely controlled by shining light through skin and skull into their heads. Donovan and dal Maschio then placed a zebrafish larva with such a light-switchable brain on the stage of a microscope and projected computer-generated holograms, composed of three-dimensional light patterns, into the fish brain. The light beams were in the infrared range (so-called two-photon mode), which makes them invisible to the fish, and were shaped to target a small group of individual neurons. A fast camera recorded the animal’s tail movements while the neurons were activated in changing combinations. This was repeated until a group of just three neurons was identified whose activation was sufficient to trigger the bending of the tail. The team then stimulated these three cells and simultaneously recorded the activity spreading through the brain using a fast 3D imaging approach.

Tracing a behavioral command through the brain

From this dataset, a computer program identified activity patterns associated with distinct components of the elicited behavior and assigned each individual neuron a “contribution score.” Finally, single neurons with interesting functions were reconstructed by visualizing their shape under the microscope. Because brains are wired very similarly from fish to fish, it is possible to draw a wiring diagram by combining data from many such experiments.

“It’s the first time that a behavioral command can be traced as it spreads from a few initial cells throughout the brain to the actual physical action,” rejoices Marco dal Maschio. He has good reason to be optimistic: The new experimental workflow lets him and his colleagues explore brain circuits in unprecedented detail. As the function and structure of the brain are conserved by evolution between fish and mammals, the new insights such studies will provide are likely to shed light on general principles of brain and behavior.