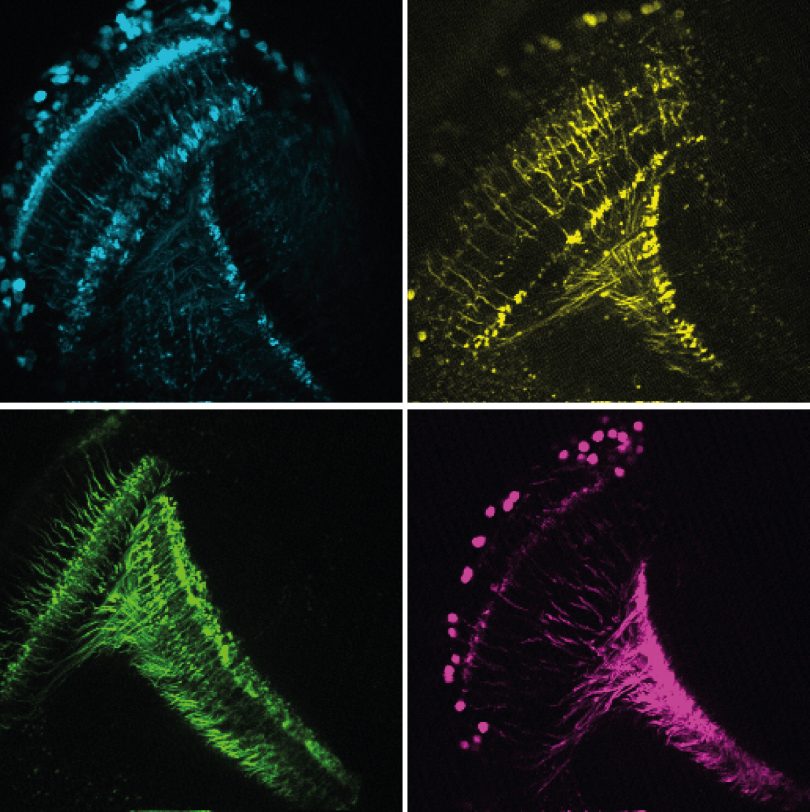 The fly brain calculates movements from signals transmitted by different types of cells (four, shown here in colour) – and motion detection speeds up once the animals start to move. © MPI of Neurobiology / Meier, Serbe & Arenz

In order to react to changes in the environment in good time, the brain must analyze the signals it receives from the eyes rapidly and accurately. For example, the ability to recognise the direction in which an approaching car is moving is vital to the survival of modern humans in cities. Using the brain of the fruit fly Drosophila as a model, scientists from the Max Planck Institute of Neurobiology study how the brain extracts this essential motion information. They have now described in detail the cells that enable downstream neurons to recognize the direction of movement. Interestingly, the characteristics of these input cells exactly match to a motion detector model they recently proposed. In addition, the cells alter their characteristics according to the animals’ state: when the fly is active, the cells respond faster to light stimuli.

Humans perceive their environment mainly through their eyes. The ability to recognize movements and their direction is something that seems almost trivial and automatic to us. However, this information has to be processed in the brain as the light-sensitive sensory cells of the retina can only register changes in contrast. The direction of a movement can only be calculated through the comparison of neighbouring signals. Various models exist for these calculations. Alexander Borst and his team at the Max Planck Institute of Neurobiology study the extent to which these models can be applied to the brain’s neuronal circuitry. Their test subject is the fruit fly Drosophila, a master of motion perception.

In the brain of the fruit fly, the T4 and T5 cells are the first neurons that respond to a motion stimulus in a direction-selective way. It was long assumed that these cells compare the signals from two adjacent image points in the fly’s field of vision and in this way calculate the direction of motion. However, this very simple model was unable to explain all of the empirical measurements recorded by the neurobiologists. “So our department developed a model in which three rather than two adjacent image points are compared with each other,” says Alexander Arenz, explaining the starting point of the current study. “We wanted to test this model using the cells in the fly brain.” A new anatomical study had revealed beforehand that both T4 and T5 cells receive their input signals from four different types of cells. Hence a model with three input cells appeared plausible.

Using a kind of fly cinema, the researchers presented different light stimuli to the flies and recorded the reactions of the different input cell types. The results revealed strong variations in the speed and duration of the individual cells’ responses to changes in brightness. To analyze the significance of these differences in greater detail, the researchers fed the measured data on the cell characteristics into a computer simulation of the network. The simulations indicated that the measured differences between the cells and the resulting delays with which the T4 and T5 cells receive their signals are essential for the recognition of a direction of motion. “So the motion detector with three cells functions very well with these cells,” explains Michael Drews, one of the study’s two first authors. “We now have to find out how the fourth input cell gets involved in this circuit,” he adds.

To narrow down the tasks of the individual cells even further, the researchers availed of the fact that the fly brain processes visual impressions faster when the animal moves. “This can be expected, as the surroundings move past the eyes far more rapidly when in motion,” explains Alexander Arenz. To generate this state in the fly brain, the scientists stimulated octopamine receptors, which are activated under natural conditions when the animals move. The measurements they recorded showed that under these “active conditions” the input cells worked faster and responded more strongly to higher motion speeds – and, as a result, the downstream T4 and T5 cells did so, too.

“The results demonstrate impressively the flexibility with which the neuronal motion detectors can adapt to the animals’ behavioural state”, explains Alexander Borst in summary. In this way the fruit fly can reliably perceive movements in its environment when it moves at a high speed. No wonder flies are so hard to catch.