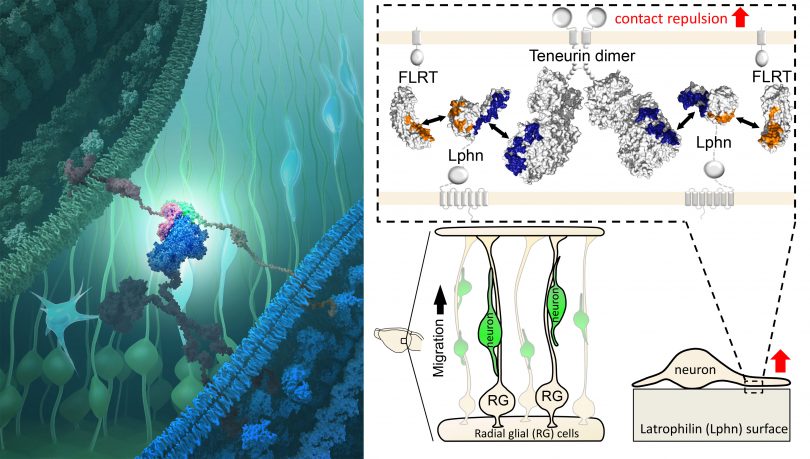 The interaction between three proteins shoves young nerve cells to their destination in the brain. Towards the end of brain development, however, the proteins hold together, enabling synapses to form. © Falconieri Visuals, LLC and del Toro et al. in Cell, January 2020

Identification of a protein complex that attracts or repels nerve cells during development.

The three proteins Teneurin, Latrophilin and FLRT hold together and bring neighboring neurons into close contact, enabling the formation of synapses and the exchange of information between the cells. In the early phase of brain development, however, the interaction of the same proteins leads to the repulsion of migrating nerve cells, as researchers from the Max Planck Institute of Neurobiology and the University of Oxford have now shown. The detailed insight into the molecular guidance mechanisms of brain cells was possible due to the structural analyses of the protein complex.
——

Well anchored, the proteins Teneurin and FLRT are located on the surface of nerve cells. They are on the lookout for their partner protein, Latrophilin, on other neurons. When the three proteins come into contact, they interconnect and hold the membranes together. They then trigger still largely unknown signaling cascades and thus promote the formation of a synapse at this site.

Teneurin and its partner proteins are known to establish these important cell contacts in the brain. Teneurin is also an evolutionary very old protein, with related proteins found in diverse organisms ranging from bacteria to worms, fruit flies and vertebrates. However, the role of these proteins during brain development, when neurons are not yet forming synapses, remained unknown.

An international team of researchers now investigated in detail the structure of the Teneurin-Latrophilin protein complex. Using high-resolution X-ray crystallography, they were finally able to find out more about its function in early brain development.

The structural analyses and the subsequent simulation of FLRT-binding enabled the researchers to identify the binding sites, where the three proteins interconnect. By introducing minimal changes, the scientists could interrupt these binding sites. As a result, the migration behavior of the embryonic neurons changed in the brains of mice.

During brain development, embryonic neurons migrate to “their” brain area. As the investigations have now shown, the three proteins help to guide the cells to their destination. “Surprisingly, this happens not by attraction, as in synapse formation, but by repulsion of the cells,” explains Rüdiger Klein from the Max Planck Institute of Neurobiology. “This function was completely new and unexpected,” adds Elena Seiradake from Oxford University.

Embryonic neurons often have only a cell body and short protrusions, called neurites. When Teneurin and FLRT on these structures bind to Latrophilin, the cells repel each other. As a result, the migrating cells partially lose their hold and progress more slowly. Thus guided, the cells reach their target brain area at the right time, where they mature and form a long axon.

However, when on the surface of such an axon, Teneurin and FLRT no longer trigger a repulsive reaction upon the encounter with Latrophilin. Here and now, the proteins pull the cells together, induce the formation of synapses and ultimately lead to the assembly of networks of communicating neurons. “The same proteins thus lead to completely different reactions – depending on their location on the cell,” summarizes Elena Seiradake the results.

“We now have ideal conditions to investigate further interactions of the proteins during brain development,” explains Rüdiger Klein. In their previous studies, the researchers were able to show that FLRT influences both the migration behavior of young nerve cells and the formation of folds on the brain surface via interactions with its own binding partners. “It will be exciting to see whether and how Teneurin and Latrophilin are involved in these interactions,” says Klein.