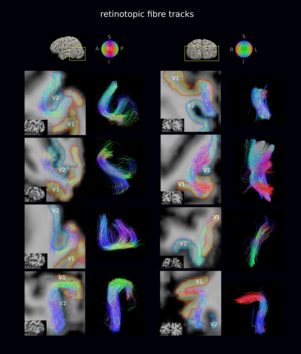 The scientists made a representative subset of the short white matter fibers visible connecting the lower and higher visual cortical areas in the brain. © MPI CBS

Their study is an important step towards a much more precise reconstruction of the unique network of anatomical connections and the flow of information in the brain in healthy and sick people and thus a better understanding of the brain.

The human brain is an immense network of a multitude of cells connected by billions of nerve fibers. Almost 90 percent of the connections in our brain are short and transmit information between lower and higher processing levels. These connections ensure that our brain functions: With their help, we see, hear, think and act. That is why neuroscientists are looking for new methods that can represent these short connections non-invasively. “We are now able to detect short nerve fibers with a resolution higher than one millimeter. To validate our results, we combine functional and anatomical magnetic resonance imaging and compare their results with each other,” explains Fakhereh Movahedian Attar, who conducted the study with her colleagues at the Max Planck Institute for Human Cognitive and Brain Sciences.

The scientists make neuronal fibers and nerve connections in the brain visible by taking advantage of the limited mobility of water in the densely packed nerve fiber bundles. The fiber directions and connection strengths are then derived from this. “This method is widely used to detect long fiber tracts in the brain, but the short fibers, which are thin and often cross over each other, are not detected. We have now combined the latest magnetic resonance imaging technology and tailored analysis techniques to overcome this limitation. To image the short fibers, we used our institute’s Connectome scanner, one of four such devices worldwide,” says Fakhereh Movahedian Attar, describing the method.

Wired together
She and her colleagues were able to show that the areas in the visual cortex of our brain that are responsible for visual processing at lower and higher levels are wired together by short fibers according to a very specific principle. Such cortical regions, which process the same part of the visual field, are also more strongly interconnected. The study improves our understanding of how brain structure is related to its function, comparable to how networks of streets affect the flow and direction of traffic.

The short fiber tracts change with normal brain development and can also be affected by various neurodegenerative diseases, such as multiple sclerosis. Therefore, their improved measurement not only promises progress in the basic sciences but in the long term possibly also in clinical diagnostics.