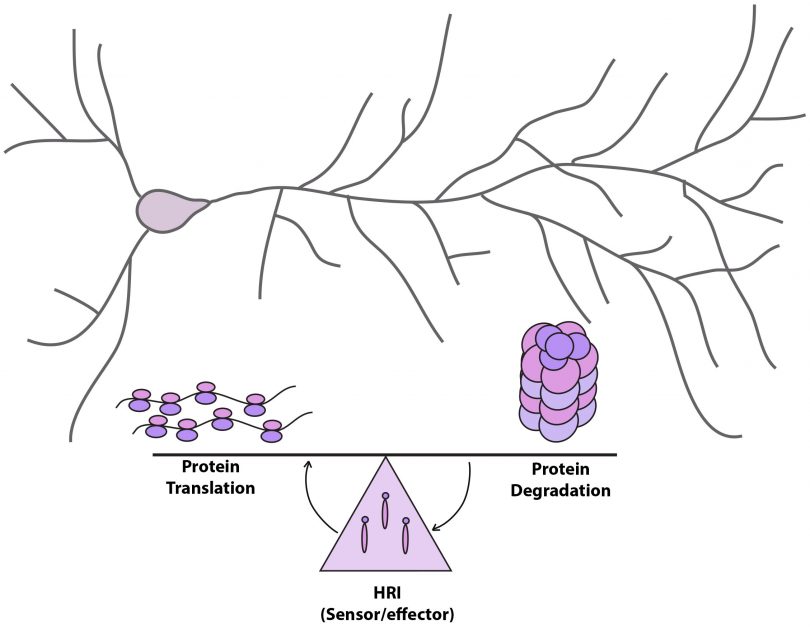 Cells use proteins as their ‘building blocks’ to carry out functions. Proteins are not stable, they are constantly being turned over (degraded and synthesized). A team of scientists led by Erin Schuman from the Max Planck Institute for Brain Research has examined a feedback mechanism between the major protein degradation pathway (the ubiquitin-proteasome system) and protein synthesis in neurons. In the new study published on April 24 in eLIFE, they discovered that inhibition of protein degradation leads to a dramatic reduction of newly synthesized proteins in neuronal cell bodies and dendrites via an enzyme called heme-regulated kinase inhibitor (HRI).

A process called ‘proteostasis’ enables cells to keep an optimal protein concentration using a variety of mechanisms that are not yet fully understood. While many studies thus far have focused on the regulatory factors that are associated with proper protein synthesis, or protein degradation, much less attention has been paid to the coordination of protein synthesis and degradation within cells.

“The study of proteostasis is particularly important in neurons as alterations in protein synthesis and degradation are associated with many disease states such as neurodegeneration or the process of aging”, says Schuman. “As an additional challenge, neurons must dynamically regulate their synaptic proteome, the entire complement of proteins expressed at synapses, in response to neural activity”, Schuman adds.

While it is clear that changes in synaptic transmission involve extensive regulation of the synaptic proteome via the regulated synthesis and degradation of proteins, it is not well understood how these two processes are coordinately regulated to achieve the desired level of individual proteins at synapses.

To address this question, Dr. Beatriz Alvarez-Castelao, the study’s first author, and colleagues studied the impact of proteasome inhibition on protein synthesis in mature neurons. “We found that blocking proteasome function leads to a coordinate reduction in protein synthesis, indicating the existence of a global proteostatic feedback pathway in neurons”, explains Alvarez-Castelao.

“The activity and expression of neuronal HRI is regulated in a biologically clever manner, expression is kept low by a short- half-life and a translational control mechanism that is relieved by proteasome inhibition- increasing HRI expression and leading to the coordinate regulation of protein synthesis”, says Alvarez-Castelao.

The results indicate that multiple mechanisms (including rare tRNAs availability, and protein stability) work together in an orchestrated manner to enhance the expression and activity of HRI in response to reduced proteasome activity. These mechanisms suggest that HRI is an optimized sensor and effector for sensing and responding to proteasome inhibition.

“Our findings are particularly exciting given that the role of HRI in neuronal function is almost completely unknown. The regulation by heme highlights an important element to consider in the context of neuronal function given emerging data that point to dysregulation of iron homeostasis in neurodegenerative disorders”, Schuman concludes.