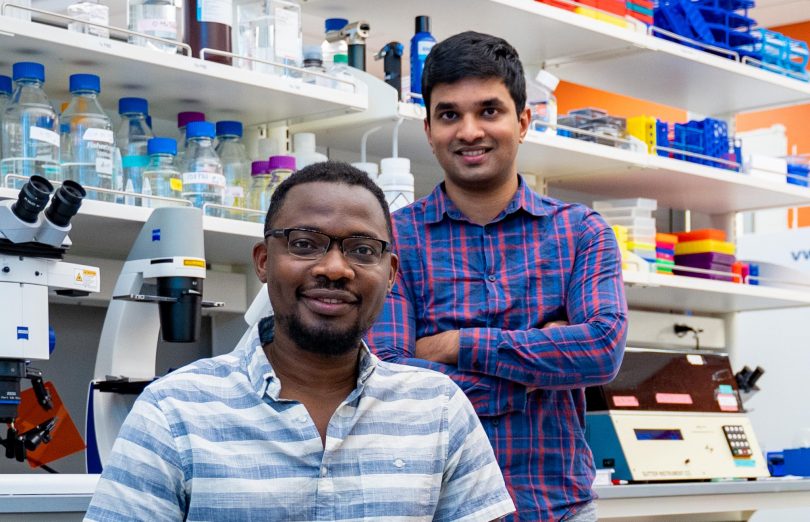 Researchers at the Max Planck Florida Institute for Neuroscience (MPFI) have uncovered a new role for a distinct inhibitory cell cluster in the amygdala, acting to dynamically modulate synaptic connections during fear learning.

Has your heart ever started to race at the thought of an upcoming deadline for work? Or has the sight of an unknown object in a dark room made you jump? Well, you can probably thank your amygdala for that.

The small almond-shaped brain structure is central to how we perceive and process fear. As we start to learn to associate fear with cues in our environment, neuronal connections within the amygdala are dynamically altered in a process called synaptic plasticity. Although this physiological mechanism is important for facilitating fear learning, it has mostly been studied in the context of excitatory neurons within the amygdala. Far less is known about the role inhibitory cells play.

In a recent publication in Cell Reports, MPFI scientists from the Bolton Lab delve deeper into a specialized portion of inhibitory circuitry in the amygdala, known as the apical intercalated cell cluster (apITC). Characterizing this small but distinctive cluster of cells, the Bolton Lab has discovered rich connectivity and a rather unique ability to modulate plasticity in the amygdala.

“What really grabbed our attention was the fact that relatively little was known about apITC function or connective circuitry,” explains Douglas Asede, Ph.D., first author and former postdoc in the Bolton Lab. “When working with a relatively unknown brain area, it’s a game of inputs and outputs. First, you have to identify what connects with the neuron cluster and what it connects to, then evaluate what functional role that circuitry plays.”

The Bolton Lab began its investigation by characterizing and functionally testing the incoming connections to the apITC. First, the team utilized a highly specialized technique called monosynaptic tracing to selectively identify the upstream presynaptic partners. Once identified, the researchers used a combination of presynaptic optogenetic stimulation (light activation) and postsynaptic electrophysiology to verify that the connections were functional.

“We were able to unravel a number of diverse inputs for this unique cell cluster, ranging from areas important for memory such as the entorhinal cortex to sensory processing regions such as the thalamus,” explains Dr. Asede. “Among this diversity, two notable inputs from the thalamus stood out because of their relative strength compared to other connections we tested as well as their origin in thalamic regions known for their involvement in fear learning.”

The strong connections to the apITC originated from two areas of the thalamus, the medial geniculate nucleus (MGm) and the posterior intralaminar nucleus (PIN). Previous work has shown the MGm and PIN to be important processing centers for auditory and somatosensory information, respectively. In the context of fear learning, inputs from the thalamus send fear-related sensory information to the amygdala, which then integrates and associates fear with particular cues from the environment.

To examine whether this sensory information flow through the apITC was important for fear learning, MPFI scientists studied the changes in these synaptic connections in mice directly after behavioral training. A group of mice underwent classical fear conditioning and behavior-driven changes and were then evaluated using pre and post-synaptic markers for plasticity. Interestingly, the team found significant signs of synaptic strengthening in the sensory inputs to the apITC after fear learning when compared to control animals.

“Typically, when synapses are important to a particular behavior, their connections are strengthened during learning, so our results really highlighted the importance of these sensory connections in fear learning,” notes Dr. Asede.

The LA is a region of the amygdala that is strongly associated with fear learning, fear-related sensory integration, and the formation of fear-based memories. The Bolton Lab used simultaneous electrical stimulation of thalamic sensory inputs and optogenetic stimulation of apITC cell inputs to the LA to reveal that activation of apITC acts as a gate to reduce incoming sensory-driven responses in the LA.

“Armed with the understanding that apITC is important for sensory gating and fear learning, we next looked at what type of downstream connections the apITC makes to give us a clue about possible functions the cluster has in the amygdala fear circuitry.”

Classically it’s been thought that inhibitory cells within the brain make very short-range, downstream connections, acting to dynamically modify circuits within their own local environments. Using axonal reconstruction, the Bolton Lab identified that while most apITC connections are local axon collaterals to neighboring apITCs or project to a close region within the amygdala called the lateral amygdala (LA). Surprisingly, they also identified a subset of relatively long-range connections to more distant brain structures, challenging classical thinking on inhibitory circuits.

“The apITC is one of several clusters of inhibitory neurons that surround the amygdala like a net. Each cluster has a unique role in regulating emotional processing in the amygdala by gating specific inputs,” notes Mclean Bolton, Ph.D. and Research Group Leader at MPFI. “The ITCs have receptors for many neuromodulators such as dopamine, opiates, and oxytocin so they may function as a barometer for sensing internal state and modifying emotions accordingly. This makes them a potential target for therapies to treat anxiety and PTSD, so understanding how each cluster contributes to amygdala function is important.”