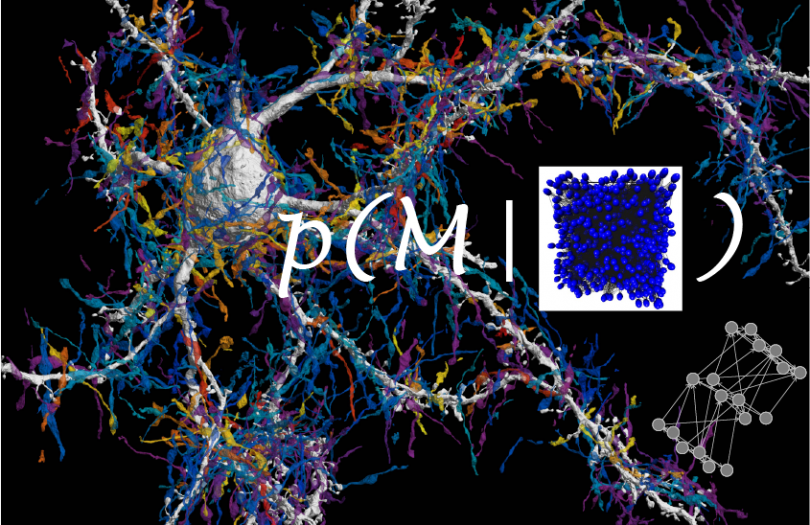 Neuron from the cerebral cortex with all its input axons and models of neuronal circuits (sketches). P(M|C) describes a formal version of a method to compare the validity of different brain models using just a circuit map. © Max Planck Institute for Brain Research / background image from Motta et al. Science 2019.

Our brains house about 85 billion neurons that that communicate with each other via synapses and form the most complex networks known to date. Huge technological leaps over the past decade in the field of “Connectomics”, the mapping of neural connections, has allowed scientists to gather tremendous amounts of data, capturing the organization of these networks at the level of synapses. But what can this data teach us about the brain’s mode of operation? Researchers at the Max Planck Institute for Brain Research and Helmholtz Zentrum München developed a computational modeling approach that helps dissect which of the plethora of proposed brain models are likely the correct ones.

A high-quality image of a bicycle is quite informative about this object’s function: one can infer the rolling movement of the tires, observe the link between pedals, chain and rear wheel, and after careful inspection also deduce the operation of the hand brakes. For understanding the function of cars, however, beautiful pictures of their outside will not be as informative, one needs to open the hood and analyze the motor in detail to learn about its operation. Thus, certain types of data about complex systems are more informative than others, and it is not clear a-priori, whether and to what degree data about the detailed synaptic structure of the nervous system is informative about its rules and modes of operation.

For nervous systems, including our brains, that process dynamic electrical activity, it is especially challenging to determine what can and what cannot be learned by observing the structure of the underlying neuronal networks. Unlike computers and smartphones, the network structure of our brains encodes both memory and the algorithms of how to use information for predicting, hypothesizing, and interacting. Neuronal networks are therefore assumed to be more informative than, for instance, the processor of a computer chip. But how informative are they?

In the study, published today in Nature Communications the team of researchers around Moritz Helmstaedter from the Max Planck Institute for Brain Research in Frankfurt and Fabian Theis at Helmholtz Zentrum München focused on circuits in the sensory cortex, occupied with analyzing information of touch. They developed a so-called Bayesian approach to connectomic analysis: Rather than mapping connectomes and then studying their properties, this new approach starts by considering possible models of computation in neuronal networks, and then determines – for a given connectome – how much it supports one or several of these hypotheses. This approach has the advantage of providing a scoring of explanations: The scientists obtain a score of how strongly a certain model is supported by the measured connectome.

“The study also shows how models, which do not themselves make strong requests to how the neuronal networks should be configured, have substantial structural consequences that make their operation detectable in a connectome”, says Theis.

With these new approaches, the researchers hope to provide a novel framework for how to use connectomes for the testing of hypotheses in Neuroscience. “Being able to throw away long-standing ideas about how the brain works using novel data would be a dream come true: we can then as a field focus on the remaining hypotheses, and explore these, and stop wasting time on models that are likely irrelevant for the operation of real-world nervous systems”, according to Helmstaedter.