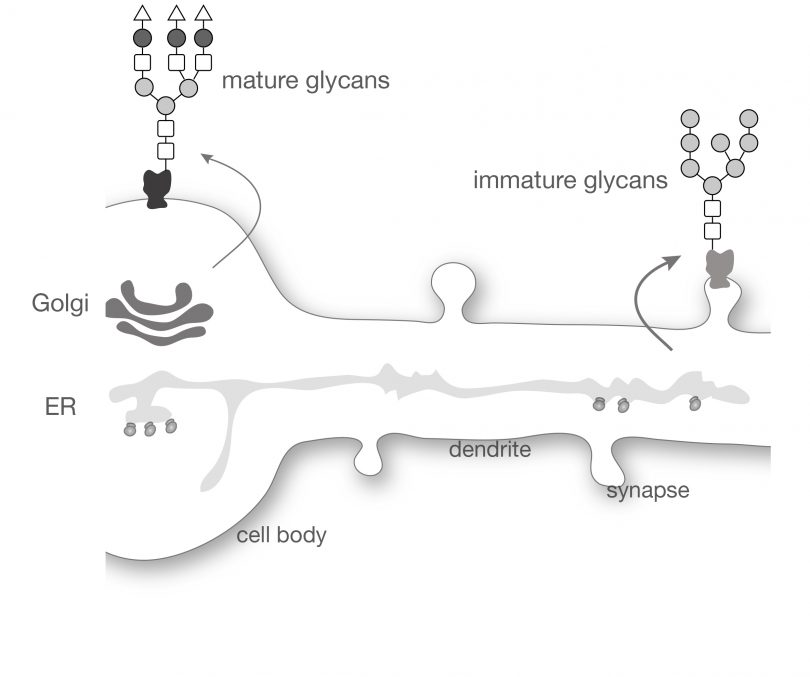 Many neuronal proteins have atypical glycosylation profiles consistent with the virtual absence of an important organelle, the Golgi apparatus, in neuronal processes.

To rapidly carry information throughout the body, neurons form intricate networks by sending long protrusions to physically contact other neurons, sometimes meters away from where their main body (hence called the cell body) is located. These tree-like protrusions are either called axons if they are used to send information or dendrites if they receive information from other neurons. Axons and dendrites contact one another at specialized communication structures called synapses where the axon stimulates the dendrite by releasing small chemical compounds called neurotransmitters, that bind to specialized proteins called neurotransmitter receptors which are expressed at the surface of dendrites, and trigger electric signals that travel through the rest of the cell when they are activated. Sugar molecules, so-called glycans, are one of the components of these receptor proteins, but were not well studied in neurons until now. In a recent paper, Cyril Hanus and colleagues in the Schuman Lab at the Frankfurt Max Planck Institute for Brain Research showed that many neuronal proteins have atypical glycosylation profiles consistent with the virtual absence of an important organelle, the Golgi apparatus, in neuronal processes. These atypical sugar molecules change how the receptors respond to neurotransmitters.

To adapt their response to synaptic stimulation, for example during learning, neurons control how many receptors are expressed at the cell surface, in particular by producing more of these receptors. These new receptors can be made in the main cell body but, to speed up the process during memory formation, also locally in dendrites, close to synapses where they are needed. However, while the endoplasmic reticulum is found all over the neuron, including in the dendrites, the Golgi apparatus is generally only present in the main cell body. It was not known how surface proteins are made in the dendrites or how the proteins’ glycosylation profiles are altered in the absence of a Golgi apparatus.

Cyril Hanus: “These new results show that neurons can produce surface proteins in a way that is different from other cells, and in doing so control important aspects of the function of these proteins, a process that may, in the long run, be exploited to design new medicines tailored to neuronal proteins.”