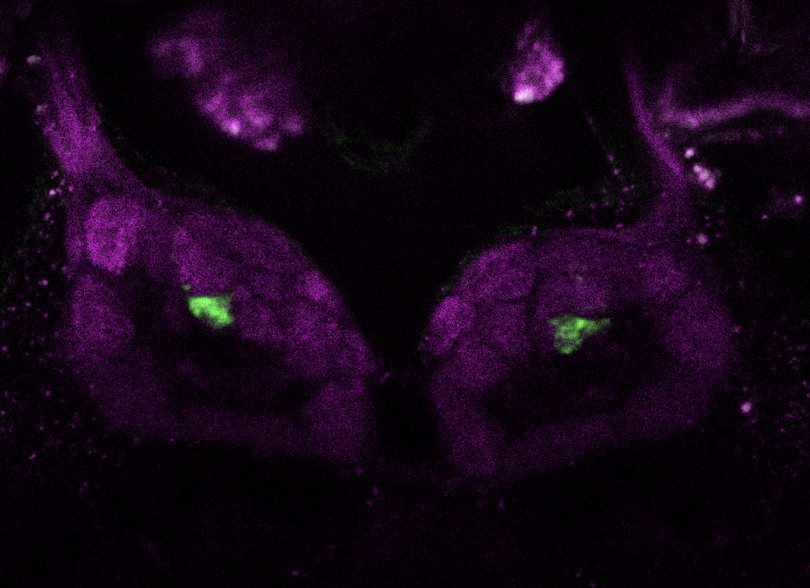 Fluorescence-microscopic image of the antennal lobe, the olfactory center, of the vinegar fly (Drosophila melanogaster): Because the fly has two antennae, the antennal lobe also consists of two parts, a left and right hemisphere. The spherical structures are the olfactory glomeruli; more than 50 glomeruli are found in the antennal lobe of a vinegar fly. Glomeruli are neuronal networks where many synapses form between single nerve cells, which are clearly visible in the image as all synapses are marked with a purple-magenta color. The sensory neurons of one particular glomerulus are marked with the photoactivatable green fluorescent protein (PA-GFP). Olfactory glomeruli have unique architectures which already represent the ecological relevance of the odor they process. Image: Veit Grabe, Max Planck Institute for Chemical Ecology

Scientists at the Max Planck Institute for Chemical Ecology in Jena, Germany, have now quantified and mapped the functional units of the olfactory center in the brains of vinegar flies responsible for the perception of odors. They found out that the so-called olfactory glomeruli in the antennal lobe, the insect analogue of the olfactory bulb of mammals, differ from each other in their architecture. The morphology and the structure of these spherical brain units provide information about the ecological relevance of the odors they process, especially with regard to the flies’ odor-guided behavior. (Cell Reports, September 20, 2016, DOI: 10.1016/j.celrep.2016.08.063)

Glomerular neuronal architecture reflects functional relevance. Schematic model displaying the neuronal composition of a narrowly-tuned glomerulus (magenta) in comparison to a glomerulus that responds to a broad range of odors (green). Abbreviations: OSN, olfactory sensory neuron; LN, local interneuron; PN, projection neuron. From: Grabe et al., in press, Cell Reports.[/caption]When insects search for food, a sexual mate or the ideal place for laying eggs – somewhere where the hatching larvae have a good chance to survive – they have to rely on their sense of smell. They use their olfactory organs, the antennae, to detect odor molecules in their environment. These odors are processed in the so-called antennal lobe, the actual olfactory center of the insect brain, which consists of spherical structures: the olfactory glomeruli. Here, inside the olfactory glomeruli, different groups of olfactory neurons form conjunctions or synapses which enable different environmental odors to be processed.

Until now, scientists had assumed that olfactory glomeruli share a pretty homogeneous architecture and that particular functions of the different glomeruli can be attributed primarily to special olfactory receptors on the membranes of the olfactory sensory neurons. A research team of the Department of Evolutionary Neuroethology has now shown for the first time that the neuronal composition of each glomerulus is unique and highly specific. “Each glomerulus processes different odors in a unique way. The odors, on the other hand, differ in their impact on the behavior of the vinegar flies,” explains Silke Sachse, the leader of the study.

The researchers scrutinized the neuronal architecture of the olfactory glomeruli in the vinegar fly Drosophila melanogaster and linked the morphological differences they observed to the respective functions. They labeled different neurons in single glomeruli, and counted and anatomically described these. In order to achieve this, they used transgenic Drosophila lines which expressed the photoactivatable green fluorescent protein (PA-GFP) in the neurons and high-resolution confocal microscopy. 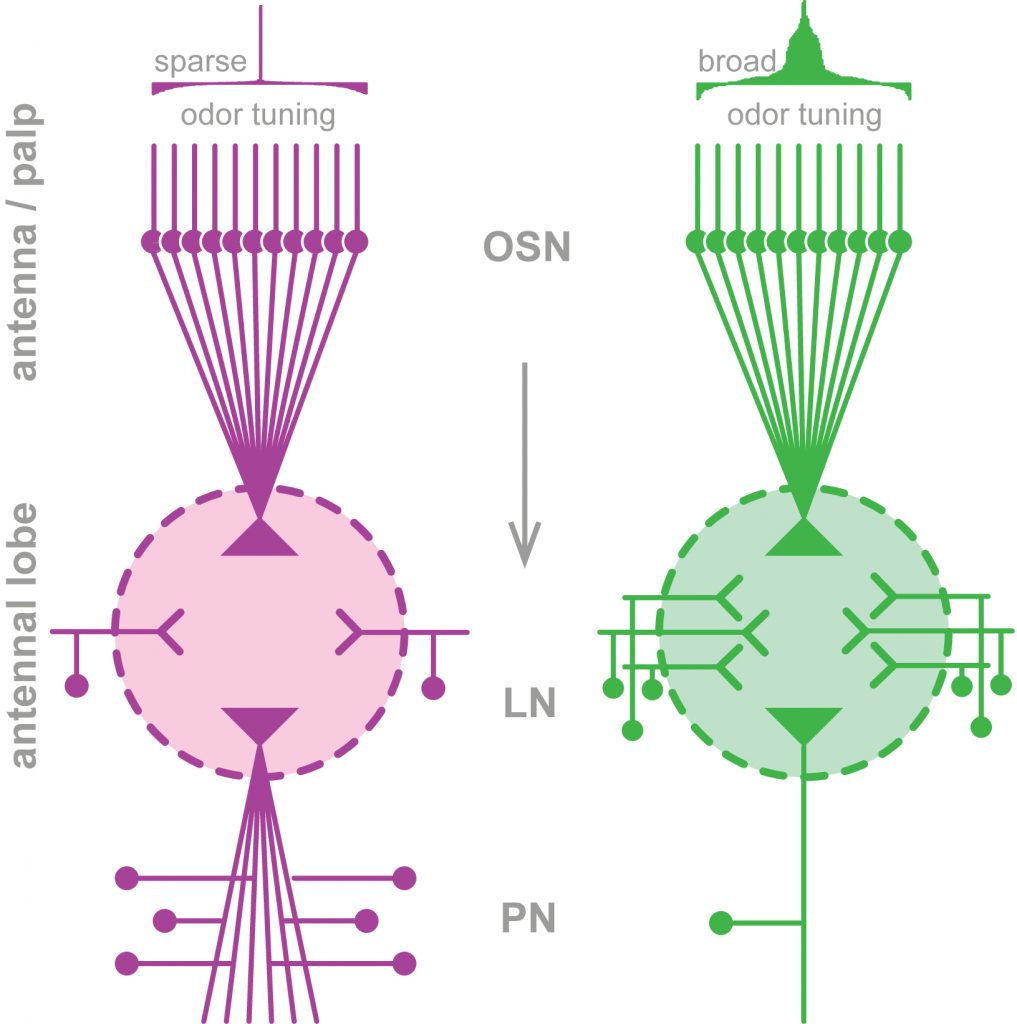 “As assumed, but until now not experimentally proven, glomeruli which contained many olfactory sensory neurons were generally bigger than were the glomeruli with fewer olfactory sensory neurons. This means that the anatomical shape of a glomerulus already provides information about how sensitive it will respond to a certain odor,” Veit Grabe, one of the first authors of the study, reports. The scientists also investigated whether there were any differences between male and female flies: Glomeruli which processed the Drosophila sex pheromones were bigger in males which were able to perceive the female attractants from large distances. Moreover, the researchers counted the so-called projection neurons which are responsible for the transmission of odor stimuli to higher regions of the olfactory system. Glomeruli containing highly specific olfactory sensory neurons – namely, those which process only one single odor – seem to exhibit more projection neurons than glomeruli which process many different odors. More projection neurons make sure that information is transferred to higher brain regions in a faster and more reliable way to result in rapid odor-guided decisions.

In order to link the morphology of a glomerulus to its function, the research team determined another important parameter by means of electrophysiological analysis: “Lifetime sparseness” indicates how many different odors can activate an olfactory receptor. If a receptor is activated by a large variety of odors, it has very low “sparseness” and is therefore a very broad-range receptor. The higher the “sparseness” of a receptor, the fewer odors it is able to perceive. An extreme case would be a highly specific receptor which responds only to a single odor. Odors which are very attractive to vinegar flies include their own pheromones, but also odors which provide clues about where to find a food source, such as overripe fruit. Some of these attractive odors may elicit oviposition in females, because they provide information about a place where larvae can hatch and have a good chance to survive. However, important odors may also be deterrents – and warning signals – because they contain information about lethal dangers, such as toxic substances in a potential food source or parasites.

“The complete quantitative mapping of all olfactory sensory neurons linked together in each olfactory glomerulus helped us to create an extended morphological basis for a better understanding of the role and function these units in the olfactory system have,” co-author Amelie Baschwitz summarizes.

Because these new insights are not limited to the vinegar fly, and may also apply to other animals or even humans, they have far-reaching significance.