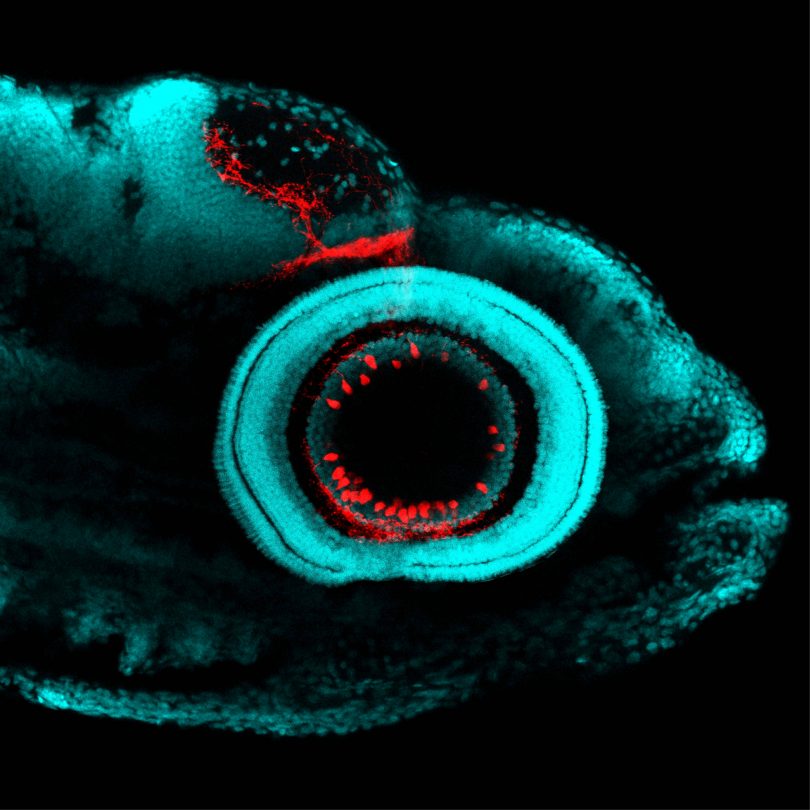 The catalog allowed studying individual cell types in the retina and linking them to a specific structure, function and behavioral response. (c) MPI of Neurobiology / Koelsch

New study decodes the molecular diversity of neurons in the zebrafish retina.

Retinal ganglion cells (RGCs) are the bottleneck through which all visual impressions flow from the retina to the brain. A team from the Max Planck Institute of Neurobiology, University of California Berkeley and Harvard University created a molecular catalog that describes the different types of these neurons. In this way, individual RGC types could be systematically studied and linked to a specific connection, function and behavioral response.

When zebrafish see light, they often swim towards it. Same with prey, although the signals are entirely different. A predator, on the other hand, prompts the fish to escape. That’s good, because a mix-up would have fatal consequences. But how does the brain manage to react to a visual stimulus with the proper behavior?

Optical signals are generated by photons that bombard the retina of the eye. Neurons in the retina collect and process these impressions. While doing so, the retina focuses on the important details: Is there contrast or color? Are there small or large objects? Is something moving? Once these details are filtered out, retinal ganglion cells (RGCs) send them to the brain, where they are translated into a specific behavior.

As the only connection between the retina and the brain, RGCs play a central role in the visual system. We already knew that specific RGC types sends different details to different regions of the brain. However, it has been unclear how RGC types differ on the molecular level, what their respective functions are, and how they help to regulate context-dependent behavior.

To begin to solve this puzzle, a team led by Yvonne Kölsch from Herwig Baier’s laboratory analyzed the genetic diversity of RGCs. Collaborating with the groups of Joshua Sanes (Harvard University) and Karthik Shekhar (UC Berkeley), they determined the transcriptomes, i. e., the patterns of all active genes, in RGCs and thereby assigned each cell its own unique molecular fingerprint. A computational analysis of the large scale dataset comprising >30,000 RGCs identified at least 32 different RGC types based on similarities.

In this new catalog of neuronal cell types, the scientists found genes that are only active in certain RGC types. With the help of these genes and targeted genome editing, they gained genetic access to selected RGC types – the prerequisite for studying their structure and function.

In the almost transparent zebrafish, it was thus possible to fluorescently label RGC types and to record in which brain regions their axonal projections end. It was also possible to determine which visual detail a RGC type prefers. To do this, the researchers showed fish larvae various visual stimuli and investigated which of them activate a particular cell type. For example, one RGC type reacted to light, but not to the simulation of an attacking predator.

What does it mean for the fish’s behavior if this cell type no longer functions? Normally, fish larvae prefer a bright environment in which they can perceive their surroundings and easily find food. When the scientists inactivated the above cell type measuring light conditions, the fish lost their ability to navigate to their favorable environment – a clear sign that the RGC type is especially important for approaching light.

The analysis links a molecularly described RGC type to a specific structure, function and behavioral response. It also shows how specialized individual RGC types are – from the brain regions they contact to their role in behavior. This finding supports the theory that highly specialized neuronal circuits are the brain’s secret to translating diverse visual stimuli into proper behavior.

In the future, the molecular catalog will allow to systematically investigate other RGC types. The study thus takes us a decisive step forward in gaining a comprehensive understanding of the functional architecture of the visual system.