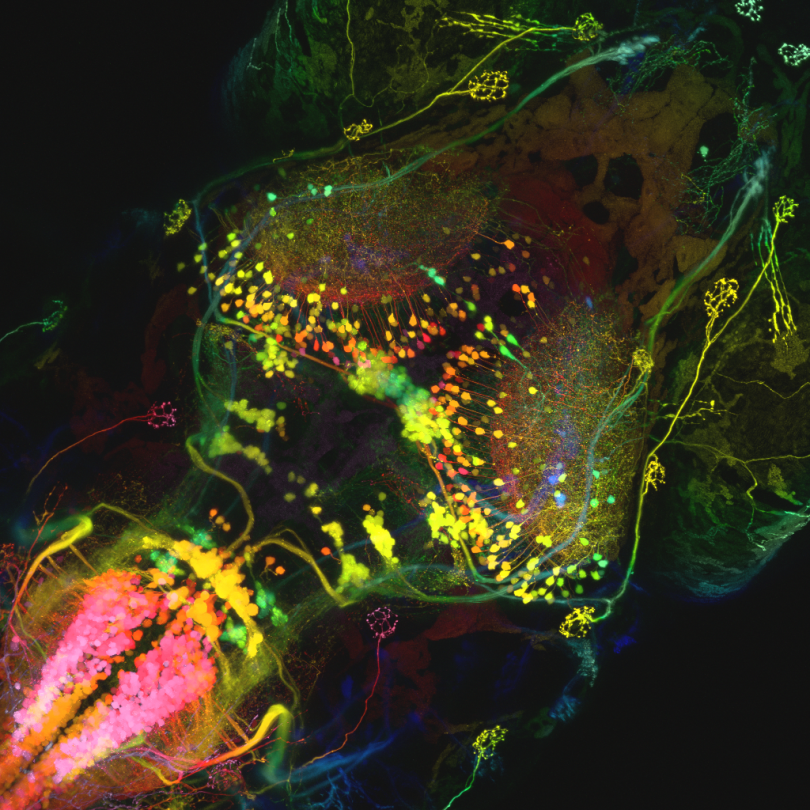 A newly discovered brain circuit enhances the signals of relevant visual stimuli and suppresses those of unimportant ones. MPI of Neurobiology / Fernandes

Being constantly flooded by a mass of stimuli, it is impossible for us to react to all of them. The same holds true for a little fish. Which stimuli should it pay attention to and which not? Scientists at the Max Planck Institute of Neurobiology have now deciphered the neuronal circuit that zebrafish use to prioritize visual stimuli. Surrounded by predators, a fish can thus choose its escape route from this predicament.

Even though we are not exposed to predators, we still have to decide which stimuli we pay attention to – for example, when crossing a street. Which cars should we avoid, which ones can we ignore?

“The processes in the brain and the circuits that lead to this so-called selective attention are largely unexplored,” explains Miguel Fernandes, a postdoctoral researcher in Herwig Baier’s department. “But if we understand this in a simple animal model like the zebrafish, it can give us fundamental insights into decision-making mechanisms in humans.”

For this reason, Miguel Fernandes and his colleagues studied the behavior of zebrafish in the predicament described above: Using virtual reality, the team simulated two predators approaching a fish from the left and right at the same speed. In most cases, the fish focused on one of the two predators and fled in the opposite direction. They thus integrated only one, the so-called “winner stimulus”, into their escape route (winner-take-all strategy).

However, in some cases, the fish evaluated both stimuli and swam through the middle (averaging strategy). This showed that fish are in principle able to include both threats in their escape way. However, they usually pay attention to only one stimulus.

With the knowledge gained from this behavioral analysis, the researchers investigated which brain regions are active during stimulus selection. In the nearly transparent zebrafish, they identified under the microscope two brain regions: the tectum, the processing hub for visual stimuli, and an appendage of it, the so-called nucleus isthmi (NI).

To determine the role of the NI more precisely, the researchers inactivated neurons in this brain region. Interestingly, in virtual reality experiments, the fish now used predominately the averaging strategy instead of the winner-take-all strategy – a sign that the NI plays a crucial role in determining a winner-stimulus.

By tracking down the cell extensions of the neurons, the scientists decoded the circuit between the two brain regions: Tectal neurons extend to the NI, whose cells, in turn, innervate the tectum. This creates a feedback loop that enhances the signals of winner-stimuli in the brain. All other stimuli classified as unimportant, on the other hand, are suppressed.

With this newly discovered circuit, the brain assigns a specific level of importance to all optical perceptions. As a basis for decision-making, this allows fish to react to important stimuli and ignore unimportant ones. Researchers can now continue to investigate for example how experience or stress influence the fish’s reaction.