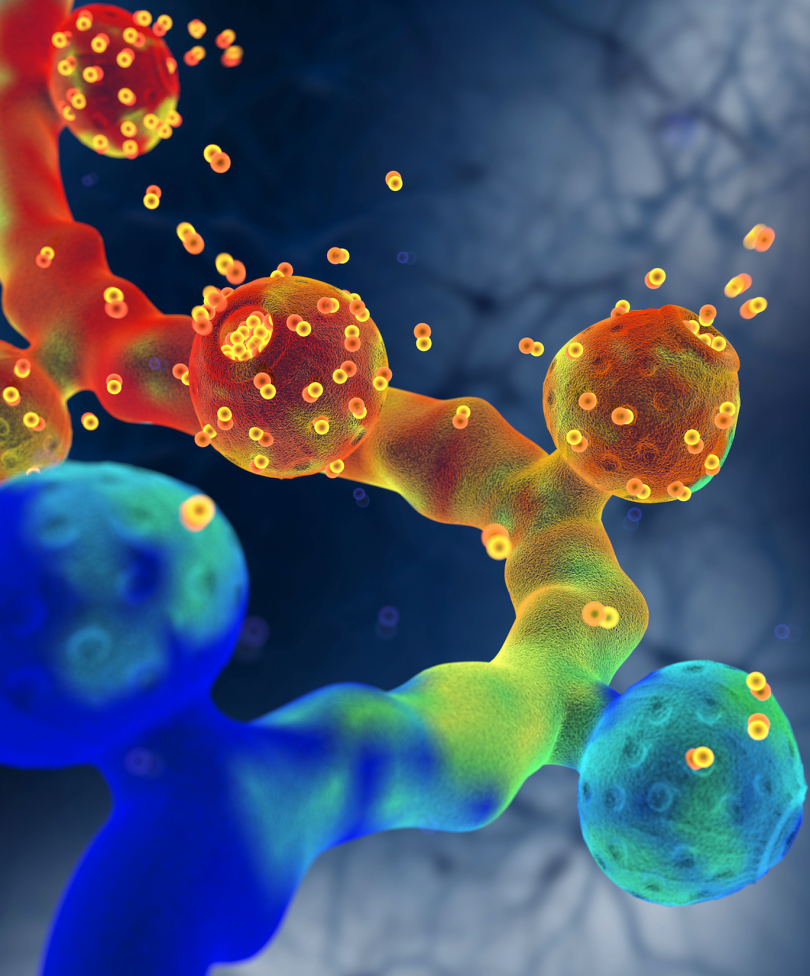 One of the most fascinating properties of the mammalian brain is its capacity to change throughout life. Experiences, whether studying for a test or experiencing a traumatic situation, alter our brains by modifying the activity and organization of specific neural circuitry, thereby modifying subsequent feelings, thoughts, and behavior. These changes take place in and among synapses, communication junctions between neurons. This experience-driven alteration of brain structure and function is called synaptic plasticity and it is considered the cellular basis for learning and memory.

There are several underlying mechanisms that work together to achieve synaptic plasticity, including changes in the amount of chemical signals released into a synapse and changes in how sensitive a cell’s response is to those signals. In particular, the protein BDNF, its receptor TrkB, and GTPase proteins are involved in some forms of synaptic plasticity, however, very little is known regarding when and where they are activated in the process.

By using sophisticated imaging techniques to monitor the spatiotemporal activation patterns of these molecules in single dendritic spines, the research group led by Dr. Ryohei Yasuda at Max Planck Florida Institute for Neuroscience and Dr. James McNamara at Duke University Medical Center have uncovered critical details of the interplay of these molecules during synaptic plasticity. These exciting findings were published online ahead of print in September 2016 as two independent publications in Nature.

A surprising signaling system within the spine

What are the consequences of the autocrine signaling within the spine?

The second publication (Hedrick and Harward et al.) reports that the autocrine signaling leads to activation of an additional set of signaling molecules called small GTPase proteins. The findings reveal a three-molecule model of structural plasticity, which implicates the localized, coincident activation of three GTPase proteins Rac1, Cdc42, and RhoA, as a causal feature of structural plasticity. It is known that these proteins regulate the shape of dendritic spines, however, how they work together to control spine structure has remained unclear. The researchers monitored the spatiotemporal activation patterns of these molecules in single dendritic spines during synaptic plasticity and found that all three proteins are activated simultaneously, but their activation patterns differed significantly. One of the differences is that RhoA and Rac1, when activated, spread beyond the stimulated spine to the surrounding dendrite, which facilitates plasticity of surrounding spines. Another difference is that Cdc42 activity was restricted to the stimulated spine, what seems to be necessary to produce spine-specific plasticity. Furthermore, the autocrine BDNF signaling is required for activation of Cdc42 and Rac1, but not for RhoA.

Unprecedented insights into the regulation of synaptic plasticity

These two studies provide unprecedented insights into the regulation of synaptic plasticity. One study revealed for the first time an autocrine signaling system and the second study presented a unique form of biochemical computation in dendrites involving the controlled complementation of three molecules. According to Dr. Yasuda, understanding the molecular mechanisms that are responsible for the regulation of synaptic strength is critical for understanding how neural circuits function, how they form, and how they are shaped by experience. Dr. McNamara noted that disorder of these signaling systems likely underlies dysfunction of synapses that cause epilepsy and a diversity of other diseases of the brain. Because hundreds of species of proteins are involved in the signal transduction that regulates synaptic plasticity, it is essential to investigate the dynamics of more proteins to better understand the signaling mechanisms in dendritic spines.

Future research in the Yasuda and McNamara Labs is expected to lead to significant advances in the understanding of intracellular signaling in neurons and will provide key insights into the mechanisms underlying synaptic plasticity and memory formation and brain diseases. These insights will hopefully lead to the development of drugs that could enhance memory and prevent or more effectively treat epilepsy and other brain disorders.