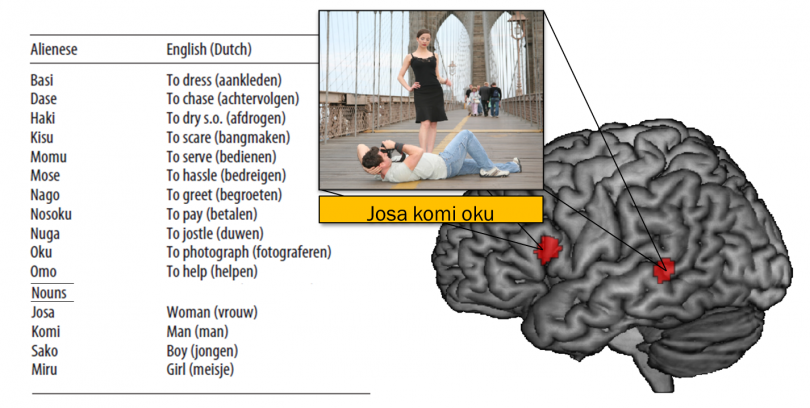 Scientists observe how the human brain memorizes a new grammar

Researchers from the Max Planck Institute for Psycholinguistics in Nijmegen have for the first time captured images of the brain during the initial hours and days of learning a new language. They use an artificial language with real structures to show how new linguistic information is integrated into the same brain areas used for your native language.

Learning a new language is a difficult task. It requires skills for memorizing new words, learning how to put those words together in a grammatical way, and integrating them with existing linguistic knowledge. In a new study from researchers at the Max Planck Institute for Psycholinguistics and Donders Institute, these skills were observed through brain imaging as native speakers of Dutch learned an artificial miniature language ‘Alienese’.

Alienese consisted of a set of words like josa ‘woman’, komi ‘man’, and oku ‘to photograph’. These words could be combined in a particular order, which either did or did not conform for Dutch word order. For instance, both sentences “Komi oku josa” (man photograph woman) and “Josa komi oku” (woman man photograph) have the meaning “The man photographs the woman”. The former sentence conforms to Dutch word order (and English), but the latter does not. Participants read sentences with familiar and unfamiliar word orders accompanied by pictures depicting the meaning .

When the unfamiliar word orders (“Josa komi oku”) were repeated, brain activation increased within regions of the brain network known to be involved for your native language. Lead author of the study Kirsten Weber proposes, “The enhanced activity might reflect a brain mechanism to build and strengthen a neural network to process novel word order regularities.” When the familiar word order (“Komi oku josa”) was repeated, brain activation decreased in language-related regions. “That we found suppressed activation on the other hand, supports our ideas that a known structure in a novel language quickly behaves like a structure in your native language. Processing a known structure is easier for the brain second time round. As a whole, our study shows that we seem to use the same brain areas for native and new language structures and that Alienese was in the process of being integrated into the participants existing language brain networks.”