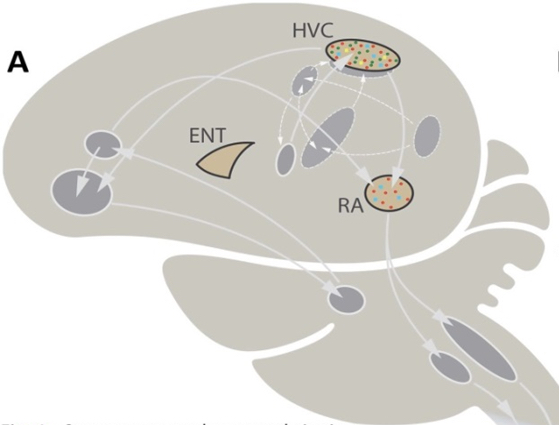 New research published in Genome Biology reveals clues on the evolution of singing behaviour in canaries.

Stefan Leitner, Carolina Frankl-Vilches and Manfred Gahr are from the Department of Behavioural Neurobiology at the Max Planck Institute for Ornithology in Seewiesen, and Heiner Kuhl and Martin Werber are from the Sequencing Core Facility of the Max Planck Institute for Molecular Genetics in Berlin, under guidance of Bernd Timmermann. They are main authors of an article in Genome Biology where they identify the canary genome and then use it to decipher the evolution of hormone-sensitive gene regulation in seasonal singing birds.

Songbirds comprise almost half of all bird species and exhibit a complex behaviour with their elaborate song, making them suitable for neurobiologists to gain insight into general mechanisms of behaviour.

The canary has become a preferred model to investigate the neurological changes (or ‘brain plasticity’) affecting hormone-dependent song. This is because it has a pronounced reproductive season, with seasonal changes in song and steroid hormone concentrations, and a varying degree of brain plasticity between the breeding and the non-breeding season.

Canaries have been domesticated since the 15th century and are the descendants of the wild canary that lives on the Azores, Madeira and Canary Islands in the North Atlantic Ocean. Like their wild ancestors, domesticated canaries sing stereotyped songs under long-day (breeding) conditions and more variable songs under short-day (non-breeding) photoperiods.

We further looked at the wider implications of how the canary genome sequence not only permits the study of hormonal influence on song and behaviour, but also provides a good model for the study of neural plasticity that could serve as a model in molecular neuroscience studies.

Our work resulted in the first high quality assembly and annotation of a female canary genome that has the size of 1.2 billion base pairs. In birds, females are the ‘heterogametic’ sex (ZW) and therefore the analysed genome sequence contained both types of sex chromosomes, Z and W. Whole genome alignments between the canary and 13 genomes throughout the bird taxa showed that on a global scale bird genomes are quite similar.

However, differences appeared when comparisons were conducted on a finer scale. For example, at the level of the nucleotide there are considerable species differences, which can impact small genetic sequences, such as estrogen, and androgen receptor binding sites. Such differences in these regions might lead to major differences in gene regulation, even between closely related species. Therefore, only by analyzing genomes at such fine detail can we gain useful information with respect to the regulation of neurophysiological and behavioural features of the canary.

Active genes in song regions of the brain

We started off by housing male domesticated canaries pairwise under long and short day conditions. Additionally, one experimental group received testosterone implants that induces singing typical of long-day conditions of animals exposed to short-day length. We then recorded and analysed their songs before we collected their brains for analysis.
On the basis of the canary genome draft, in male birds we analysed two major steroid-hormone-sensitive song-control brain regions – the so-called HVC (formerly known as ‘hyperstriatum ventrale, pars caudalis’) and RA (Nucleus robustus arcopallii). In addition we looked at one non-steroid-hormone-sensitive, non-vocal but visual brain area – ENT (Entopallium).

Following this global analysis we focused on gene networks that had three characteristics; they were related to song in the HVC and RA brain regions, showed seasonality, and were testosterone-sensitive. In particular, we examined whether the genes of these gene networks contained sequences that make them potentially more sensitive to hormones, compared to canary genes that aren’t related to song behaviour.

To verify whether the hormone-sensitive elements among these genes are specific for the canary, we also looked at the genes of the zebra finch because this species did not evolve hormone-sensitive song expression. Testosterone-sensitive up-regulated gene networks of HVC are important for neuronal differentiation. Among the testosterone-regulated genes of the canary in the HVC brain region, we found that in the zebra finch 20% of them lacked estrogen response elements and 8% lacked androgen response elements, meaning that they are strictly canary-specific.
These analyses reveal specific evolutionary changes in different parts of the song system that control seasonal singing behaviour. Thus, in the canary, those genes that are sensitive for testosterone and estrogen, and also involved in the rewiring of neurons, might be crucial for re-differentiation of the underlying neuronal substrate, such as HVC, leading to seasonal song patterning.

As many of the identified hormone-responsive gene promoter sites are canary-specific compared to other songbird genomes, the present study demonstrates the need for high-quality genome assembly to detect the evolution of genes in other comparative studies.