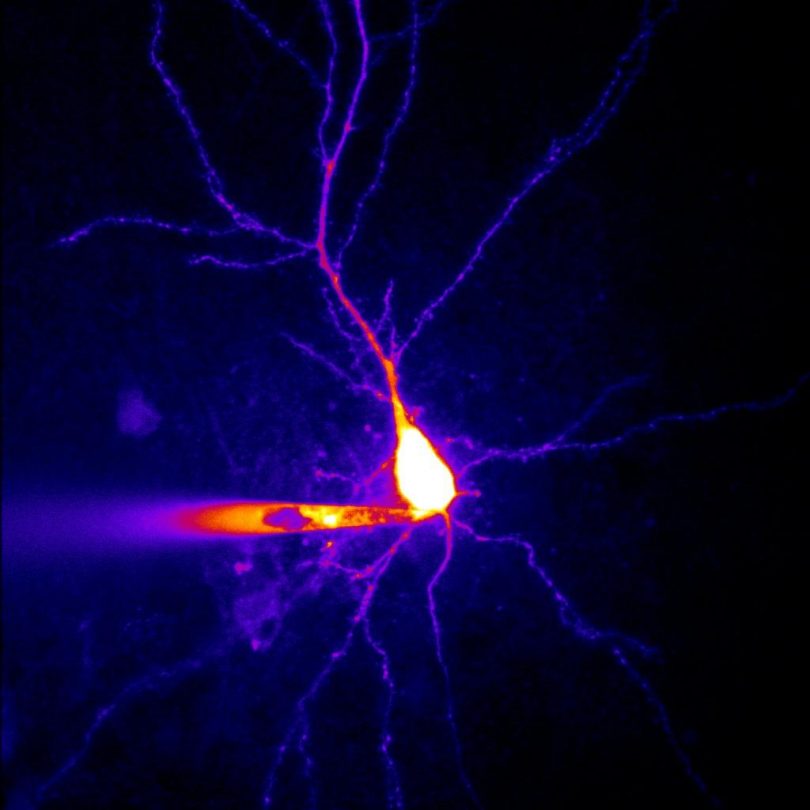 This is how a neuron from the hippocampus of a rat looks like. The cell and it's extenive processes are visualised using a fluorescent dye, filled via a glass pipette. The glass pipette, with dye, is shown on the left of the cell body. (c) Photo: AG Heinz Beck/Uni Bonn

In epilepsy, nerve cells lose their usual rhythm, and ion channels, which have a decisive influence on their excitability, are involved. A team of researchers under the direction of the University of Bonn has now discovered a new mechanism for influencing ion channels in epilepsy. They found that spermine inside neurons dampens the neuron’s excitability. In epilepsy, spermine levels decrease, causing hyperexcitability. The researchers hope that their findings can be exploited to develop new therapies for epilepsies. They are reporting their findings in The Journal of Neuroscience.

In Germany, approximately one out of a hundred people suffer from epilepsy and one out of twenty suffer a seizure at least once during their lifetime. Seizures occur when many nerve cells in the brain fire in synchrony. Scientists are searching for the causes leading to this simultaneous excitation of brain cells. Researchers at the Department of Epileptology, the Institute for Neuropathology and the Institute for Molecular Psychiatry, together with the Caesar Research Center and the Hebrew University (Israel) have discovered a mechanism which previously was not thought to be involved in the development of epilepsy.

“Doormen” determine how many sodium ions are allowed in

Neurons integrate many inputs together to then determine an appropriate output, and sodium channels play a key role in both processes. “They play an important role in the excitation of nerve cell axons and signal transfer between various cells,” says Prof. Dr. Heinz Beck, who conducts research in experimental epileptology at the Department of Epileptology, at the Life & Brain center and the German Center for Neurodegenerative Diseases (DZNE). Like a type of door, sodium channels allow sodium ions to flow into nerve cells through tiny pores. They consist of large protein complexes located in the membranes of nerve cells. The scientists found a large increase in a certain sodium influx which significantly increased the excitability of cells in the epileptic animal.

For this reason, scientists working with Prof. Beck initially compared the sodium channel proteins from the brains of epileptic rats to those of healthy animals. “However, this did not reveal any increased formation of sodium channel proteins, which could have explained the over-excitation of nerve cells.” reports the epilepsy researcher. After a long search, the team of researchers found a completely different group of substances: the polyamines. Spermine belongs to this group; it is produced in cells and plugs the pores of the sodium channels from within. Spermine then acts like a doorman, blocking entry to sodium ions and dampening the excitability of the nerve cells.

Over-excitation is attenuated through administration of spermine

The scientists investigated how much of the seizure-inhibiting substance is present in the nerve cells of rats suffering from epilepsy and compared the values to those of healthy animals. “The amount of spermine in the cells of the hippocampus was significantly reduced in diseased animals as compared to the healthy animals,” report the lead authors Dr. Michel Royeck and Dr. Thoralf Optiz from Dr. Beck’s team. “Furthermore, the reduced spermine in the nerve cell led to increased excitability; the cells were more sensitive to input and generated more output” said fellow lead author Dr. Tony Kelly. The investigators tested this important finding, compensating for the deficiency in the nerve cells of epileptic rats by adding spermine back into the cell. As a result, the increase in sodium currents was reversed and the excitability of the neuron returned to normal.

The lower level of spermine in the epileptic rat’s brain was evidently caused by an upregulation of spermidine/spermine-N(1)-acetyltransferase. This enzyme breaks down the spermine which is important in the control of sodium channels. According to the scientists, this result could be a potential starting point for novel epilepsy therapies. “If a substance was available to reduce the activity of acetyltransferase back to normal levels, the lack of spermine and thus the symptoms of epilepsy could be mitigated,” speculates Prof. Beck. However, concrete therapeutic applications are still a long way off.