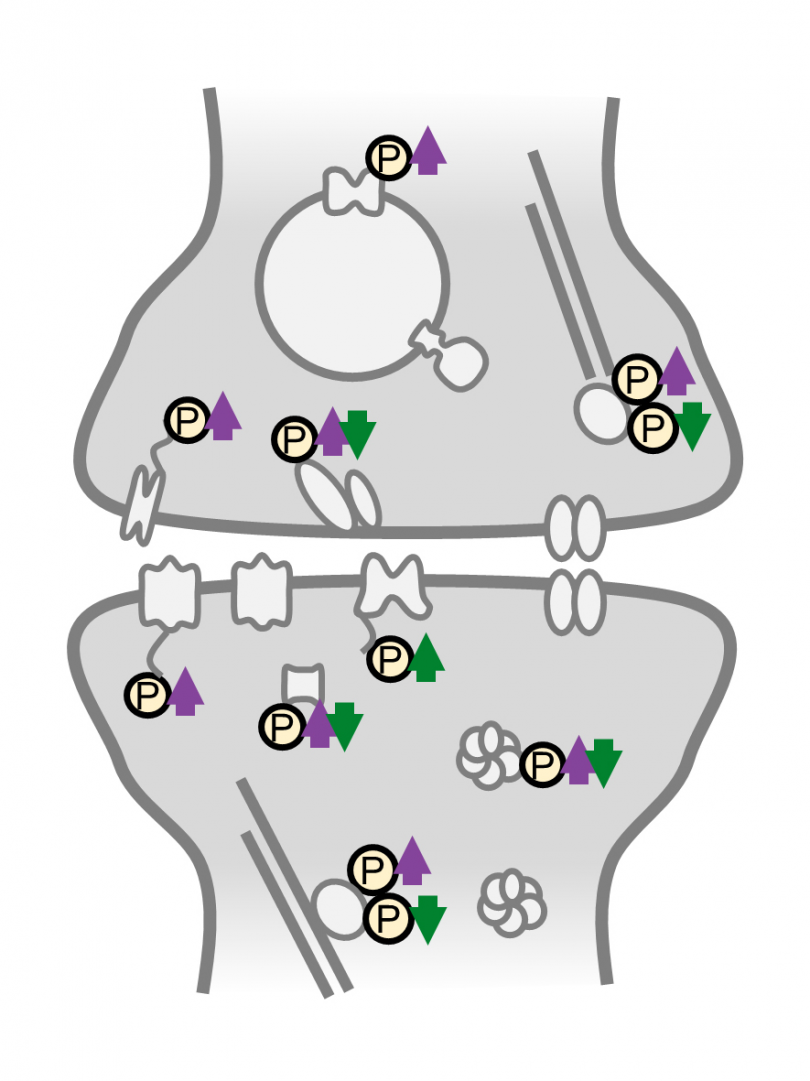 Homeostatic scaling is a form of synaptic plasticity that allows neurons to stabilize network activity in response to large perturbations. To sense such changes in overall activity levels, neurons must have molecular mechanisms to sense and implement the scaling response on timescales ranging from minutes to days. Scientists at the Max Planck Institutes for Brain Research and Biophysics in Frankfurt now studied a form of protein modification known as phosphorylation in this context and identified widespread phosphorylation of synaptic proteins which is dynamically regulated with neuronal activity. Their findings suggest “post-translational” protein modifications as potential effector mechanisms driving the homeostatic response.

To maintain their plastic properties, neurons make use of proteins that perform, facilitate or regulate nearly all essential cellular processes. The synaptic protein composition and abundance represent the molecular signature of the synapse at a given time. “The protein blueprint is defined by a chain of amino acids. However, protein activity can still be fine-tuned post biosynthesis. This is done via post-translational modifications (PTMs) in which a modifying molecular tag is added to one or more amino acids. This is a nice mechanism, allowing the cell to diversify its resources without the need to produce new proteins from scratch”, says Prof. Erin Schuman, director at the Max-Planck-Institute for Brain Research.

Protein phosphorylation is the most common PTM. It is catalyzed by two enzymes, that either add (kinases) or remove (phosphatases) phosphate groups reversibly. “We previously studied protein synthesis and degradation during homeostatic synaptic scaling and found striking differential regulation of sets of kinases and phosphatases, the “writers and erasers” of protein phosphorylation. However, to date no comprehensive data on the role of phosphorylation as a post-translational modification in this context are available”, says Julian Langer, head of the shared proteomics facility at the Max Planck Institute for Brain Research and Max Planck Institute of Biophysics.

To understand the dynamics of neuronal protein phosphorylation during homeostatic scaling, the researchers pharmacologically induced two opposing forms of scaling that result either in an increase or decrease of neural activity in cultured cortical neurons, respectively. “Using mass spectrometry, an analytical, high-throughput technique, we were able to monitor protein abundances as well as phosphorylation in a comprehensive manner. We detected over 40,000 phosphorylation events of which more than 3,300 were regulated by homeostatic scaling”, explains Kristina Desch, the doctoral student and lead author of the new study.

Activity-sensitive phosphoproteins were predominantly located in synaptic compartments and on proteins involved in reshaping the cytoskeleton. Studying the response of homeostatic scaling over the range of a few minutes to one day allowed the team to temporally classify the different phosphorylation events. “We identified many early-appearing phosphorylation events that could function as a neuron’s activity-sensor, detecting changes in its cellular environment”, says Desch. “However, we also observed late-onset or persistent phosphoregulation that could represent effector mechanisms driving the homeostatic response.”

Interestingly, much of the persistent phosphorylation was bi-directionally regulated by up- or down-scaling: phosphorylation events found continuously “switched off” during the low-activity state (up-scaling) were continuously “switched on” during the high-activity state (down-scaling). This observation suggests a new link in the molecular mechanism of the opposing types of homeostatic plasticity at the level of PTMs; in both scaling-paradigms the same signaling and effector proteins were used but on the level of phosphorylation they were regulated reciprocally.

In summary, Langer concludes that “the new dataset comprises a rich repository for researchers in the field of memory formation and synaptic plasticity, and provides a valuable resource that can be mined in future studies.”