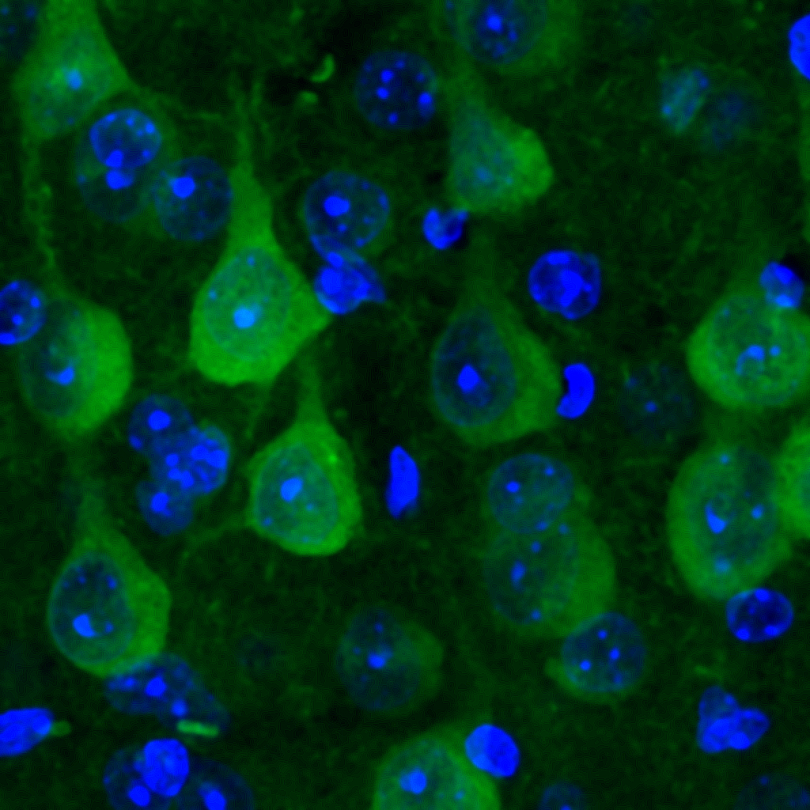 Proteins are the “tools” of our cells – they are essential to all vital tasks. However, they are only able to do their jobs if they fold correctly and adopt their respective, very specific 3D structure. To ensure that nothing goes wrong with the folding process, it is strictly monitored in the cell. The consequences of a flawed quality control can be seen, for example, in the deposition of misfolded proteins in neurodegenerative diseases such as Alzheimer’s. Researchers at the Max Planck Institutes of Neurobiology and of Biochemistry have now developed a mouse line that makes the state of protein balance visible in the mammalian brain for the first time. In this way, the processes of protein quality control can now be studied in healthy and diseased neurons in more detail.

Proteins fulfill all important tasks in our body: They transport substances, protect against diseases, support the cell and catalyze chemical reactions – to name just a few. With the building instructions in our genetic code, every protein can be produced as a long chain of amino acids. However, that’s not the end of the story: in order to perform their vital functions, proteins have to fold into complex 3D structures.

Each cell contains a whole machinery that helps proteins to fold, corrects folding errors and discards misfolded proteins. As a kind of quality control, the system thus contributes to proteostasis – the controlled function of all proteins.

In healthy cells, this quality control works very well. With age, however, it gradually deteriorates. This can become a problem, especially for nerve cells. These cells do not renew themselves and are therefore dependent on stable protein function throughout their lives. In fact, neurodegenerative diseases such as Alzheimer’s, Parkinson’s or Huntington’s disease have in common that certain misfolded proteins overload the quality control system and are not disposed of. These proteins accumulate, clump together and eventually form deposits in the brain tissue. Depending on the disease, this can lead to impaired memory or muscle control – with no chance of a cure so far. The ability to enhance the neurons’ quality control could thus present a promising therapeutic option.

In order to study the quality control defects in the individual diseases in more detail, scientists led by Irina Dudanova developed a new mouse line. With these animals, the state of proteostasis can be visualized in the mammalian brain for the first time.

The researchers introduced the protein that normally makes fireflies glow into the neurons of the mouse. Optimized to the body temperature of the beetle, the protein needs constant help to fold in “warmer” mammals. Only then can it adopt its correct structure and produce light. In order to precisely track the location of the luminescent protein in the cell, the scientists additionally labeled it with a dye. In this way, they showed that the protein is evenly distributed and glows in healthy neurons. However, if the protein quality control is overstrained, the beetle protein makes clumps and no longer glows as strongly. The beetle protein therefore serves as a proteostasis sensor.

The researchers then crossed the newly developed mouse line with mice that represent different neurodegenerative diseases. In mice showing signs of Alzheimer’s disease, the luminescent protein formed clumps, signaling strong proteostasis disturbance. Interestingly, this was not the case in Chorea Huntington mice. Irina Dudanova relates, “The different results were quite surprising. When we had a closer look at the possible reasons, we found that both the misfolded proteins themselves and their location in the cell play an important role.”

While the misfolded protein in the Alzheimer’s model forms deposits in the cell body, it clumps together in the cell nucleus in the Huntington’s mice. Accordingly, protein quality control and its capacity can vary greatly within a cell. “This shows how complex protein quality control is and how different its alterations can be in individual neurodegenerative diseases,” explains Irina Dudanova.

With the new mouse line, scientists now have a tool to specifically investigate this complexity – both in healthy and in diseased neurons. Irina Dudanova and her team plan to investigate other neurodegenerative diseases and to find out whether different cell types in the brain are affected at different rates. In addition, the mouse line could help to assess the effectiveness of different therapies for neurodegenerative diseases.