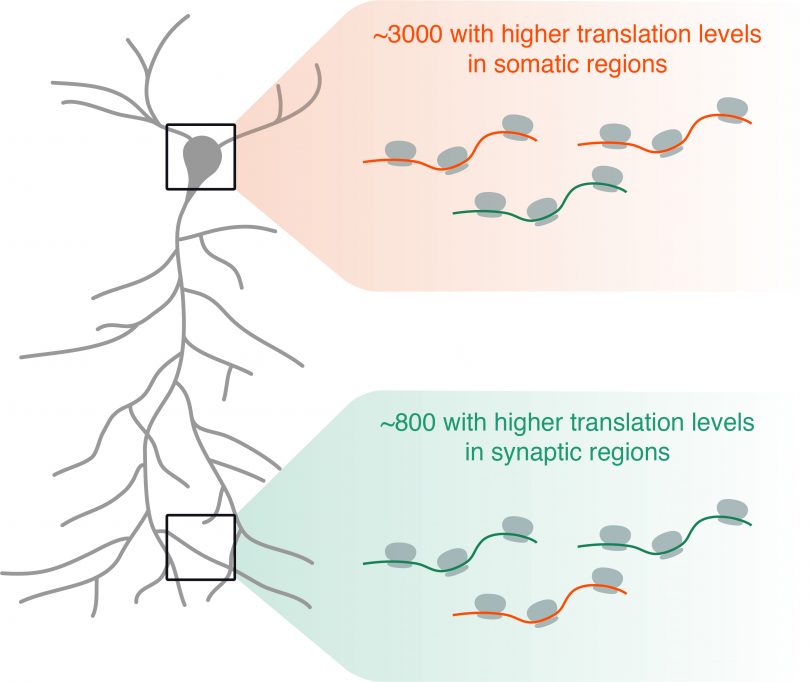 A large fraction of neuronal protein species use local translation (in dendrites and axons) as the dominant source of protein. © Max Planck Institute for Brain Research / C. Glock, A. Biever.

To form and modify synaptic connections and store information, such as memories, neurons continuously remodel their essential cellular resources, the proteins. The complexity of a neuron’s dendrites and axons (the information-receiving and -sending parts of the neuron), though, poses unique challenges for protein supply at remote locations. To fulfill the local demand for new protein, neurons localize messenger RNAs (mRNAs) and ribosomes near synapses to produce proteins directly where they are needed.

The discovery of messenger RNAs (mRNAs) and ribosomes, the protein factories, near synapses suggested that local protein synthesis could be used to supply proteins to axons and dendrites. “Skeptics in the field have always questioned whether the mRNAs in dendrites and axons are actually made (translated) into protein” says Erin Schuman, director at the Max Planck Institute for Brain Research in Frankfurt am Main, Germany, who led the work. In the new study, Schuman and her team used RNA sequencing and ribosome sequencing to determine directly which mRNAs were actually made into protein, and in what quantities in neuronal cell bodies, dendrites, and axons.

“To us, one of the most exciting findings was that over 800 protein species use local (dendrite/axon) translation as the dominant source of protein!”, share Caspar Glock and Anne Biever, former scientists in the Schuman lab and first authors of the new study published in PNAS.

To determine how efficiently an mRNA is translated to protein, the researchers counted the number of ribosomes loaded on to it. The translation level of a given mRNA is proportional to its abundance and its ribosome density. Interestingly, among the proteins that showed enhanced translation in remote compartments, the team detected many important synaptic molecules. Their data also showed that some synaptic risk genes for Autism show poor protein synthesis rates, despite robust mRNA levels.

Schuman: “We were both surprised and excited to see how important local translation is for fueling the protein composition of synapses. To us, this biology makes a lot of sense.”

The scientists have also constructed a searchable and interactive database for exploring mRNAs and their translation levels in different neuronal compartments. (http://public.brain.mpg.de/dashapps/localseq/).