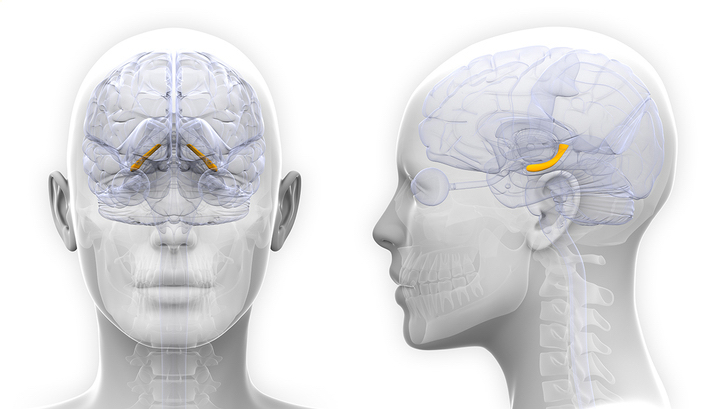 In parallel to the rhythm of the level of estrogen across their menstrual cycle, the structures of the Hippocampus of women vary (yellow). This brain area is crucial for memories, mood and emotions. © shutterstock

Each month, the up and down of estrogen in women appear to not just influence the switching between fertile and infertile days but also the structure of the brain in astonishing regularity.

Although it has already been known for some time that the brain does not remain rigid in its structure even in adulthood, scientists at the Max Planck Institute for Human Cognitive and Brain Sciences made a surprising discovery: The brain is not only able to adapt to changing conditions in long-term processes, but it can do this every month. The researchers observed that in women, in parallel to the rhythm of the level of estrogen across their menstrual cycle, the structures of the Hippocampus vary—a brain area that is crucial for memories, mood and emotions.

Each month, women experience the up and down of hormones during their menstrual cycle. And from month to month these variations appear to not just influence the switching between fertile and infertile days. The fluctuating hormone levels also change the structure of the brain in astonishing regularity, as demonstrated by the results of the study on the hormonal influence on the brain structure at the Max Planck Institute for Human Cognitive and Brain Sciences (MPI CBS) in Leipzig.

“We found, that in parallel to the rising estrogen levels leading up to ovulation, the Hippocampus also increases in volume—the volume of the grey matter as well as that of the white matter”, explains Claudia Barth, first author of the corresponding paper published in the renowned magazine Nature Scientific Reports. How these fluctuations of the brain structures precisely affect the behaviour and specific cognitive abilities remains a mystery. But the neuroscientists do have a theory: “The Hippocampus plays a crucial role in our memories, our mood, and our emotions. In mice it has already been proven that it is not just this brain structure but also different behaviours which underlie a type of monthly cycle.”

Whether these observations are also valid for humans has to be proven in further studies. After testing the results of this first pilot study on the connection between the level of estrogen and the Hippocampus in a larger group of study participants, the researchers will scrutinise the effects on the behaviour. “If it appears, for instance, that women in certain phases of their cycle are particularly receptive, these women could undergo therapy”, she explains. This could take place at a specific time point when a woman is in a position to do so.”

With these findings, the neuroscientists have laid the foundations for their overall goal: Investigating the relationships of premenstrual dysphoric disorder (PMDD), a disorder which affects one in twelve women in the days leading up to her time of the month. These women complain of severe physical and psychological symptoms such as listlessness or mood swings comparable to a depressive episode. “To get a better understanding of this disorder, we first have to find out which monthly rhythm the brain of a healthy woman follows. Only then can we reveal the differences in persons affected by PMDD”, says Julia Sacher.